It was always going to be an emotional last day for Dan Walker as he leaves BBC Breakfast, and a surprise reunion with his former co-host Louise Minchin almost brought the tears.

On Tuesday May 17, Dan, 45, made his final appearance on the morning news programme before he heads over to Channel 5 to become the lead anchor of 5 News, replacing Sian Williams.

As the show neared its end, Dan was in for a surprise as his co-host Sally Nugent introduced several video compilations, where people who he has met over the years and colleagues wished him luck on his next venture and expressed how much they were going to miss him.

Of course, his final BBC Breakfast show couldn’t end without a special appearance from Louise, 53, who was his co-host until her exit in September 2021.

As Louise emerged in the studio decked out in a bright yellow ensemble, she asked Dan if they were going to ‘break the rule of a lifetime’ before they shared a heartfelt hug.

While sitting down on the sofa – asking where she should sit alongside Dan and Sally – Louise explained that in all the years she and Dan co-presented BBC Breakfast, they never touched. 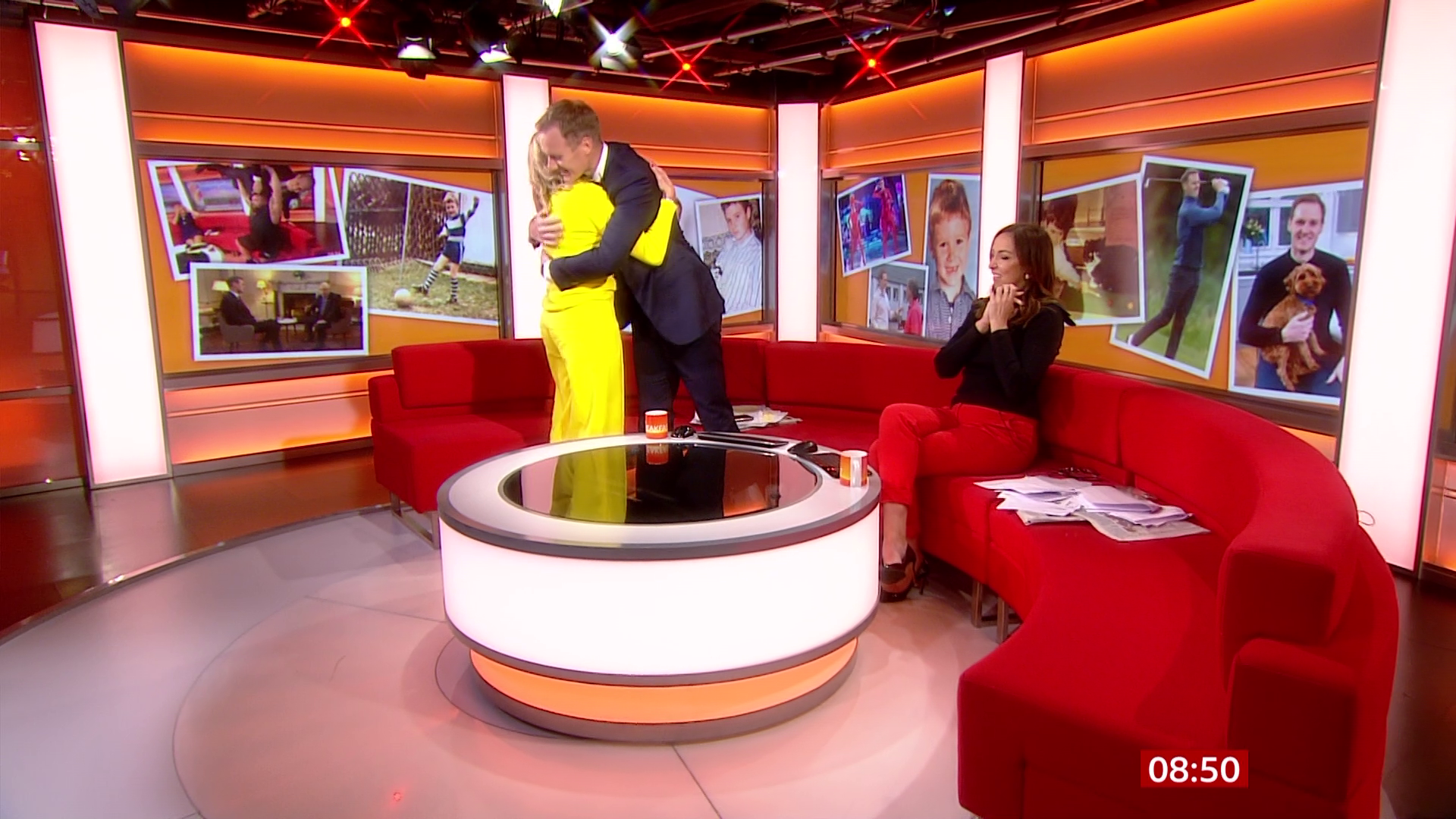 After Dan asked her how she is, Louise immediately went into a spiel explaining how much Dan means to her and BBC Breakfast viewers.

‘It’s an absolute pleasure and very emotional to be here,’ she said.

‘I know lots of people watching will be very sad that you’re leaving, because you have touched the hearts of the nation over the last six years. I know people have loved watching you. I loved working with you.’

When Louise mentioned how sad people may be over Dan’s exit, she appeared to become choked up, before continuing smoothly.

She recalled how she and Dan first met, when she interviewed him for an in-depth Royal Television Society chat, which he can’t remember.

Dan explained that he had been on powerful painkillers, as he had badly injured his Achilles at the time, explaining his lapse in memory.

Continuing to shower Dan with praise, Louise recalled the many times when she was nervous, and he calmed her down and gave her ‘confidence’ by looking her in the eye and saying: ‘You’ve got this.’

There were plenty more messages to come for Dan on the show, from individuals including Anton Du Beke, his Strictly Come Dancing professional partner Nadiya Bychkova and Maria De Cezar, who he interviewed during her hen party in an unforgettable moment from the Rio 2016 Olympics.

Minutes before the show wrapped up, a cake was brought to the table for Dan depicting him in a lobster costume from his memorable Strictly dance while sitting on the BBC Breakfast red sofa.

As the rest of the BBC Breakfast crew stood behind the sofa in the studio, the departing host said that while the tributes were ‘lovely’, part of him ‘hates this’, because he enjoys ‘talking about other people’.

‘There aren’t many jobs where you have a chance to give other people a voice. That’s what we all love doing more than anything else,’ he said.

‘Thank you for tuning in. Thank you for all the lovely messages over the years. We never ever take any of that for granted,’ he added, revealing that he had received numerous cards over the past week.

He praised the show’s crew, dubbing them ‘some of the best people I’ve ever worked with in my career’ as he shared how they had ‘been up most of the night making this programme’.

‘To be serious for a minute, at a time when trust and truth have never been more important, it’s great to work with a team that do everything to make sure that what we do is fair and accurate,’ he stated, adding that he’s ‘got no idea’ who’s going to replace him.

He also honoured his friendship with Louise, which ‘will go on for years’, before paying homage to Sally, saying he was ‘so happy’ when she got the job on BBC Breakfast.

‘There is nobody better who could have done it. We’ve had a wonderful time together. We could have had many more years. Things change, and change can be tough sometimes,’ he said.

‘You can take this show and make it amazing like you’ve already done,’ he added, before concluding his message by saying: ‘Thank you very much for a lovely send off, thank you for having me.’

BBC Breakfast airs every day from 6am on BBC One and BBC iPlayer.