Escape to the Chateau: Dick opens the toilet seat

Dick Strawbridge and Angel Adoree now have a home and business, millions are envious of. The couple first moved to France, back in 2015 after visiting thousands of Chateau’s online and in-person and they fell in love with Chateau de la Motte Husson upon arrival. However, they soon realised they weren’t getting much more than bricks, land and a moat for their money, as the whole Chateau needed renovating and bringing back to life. With a tight budget, Dick and Angel had to prioritise the restoration work and on the top of their list was a family kitchen, running water and heating. And during an old episode Escape to the Chateau when the couple were looking around and taking note of the state and work needed in each room, Dick discovered something which left his wife, Angel gagging.

The building had five floors, 45 rooms, six chimneys and 16 fireplaces – there was also a wine cellar which had space for 5000 bottles.

And the very first task was to find out what was in each room, what worked and what didn’t and create a short term plan.

The voiceover person told viewers: “The two towers that flag The Chateau is known as pepper shakers. In the one next to the dining room, they make a useful discovery.”

Dick walked in and exclaimed: “This is good! It’s practically a bathroom. It’s going to need a good, good, scrub.” 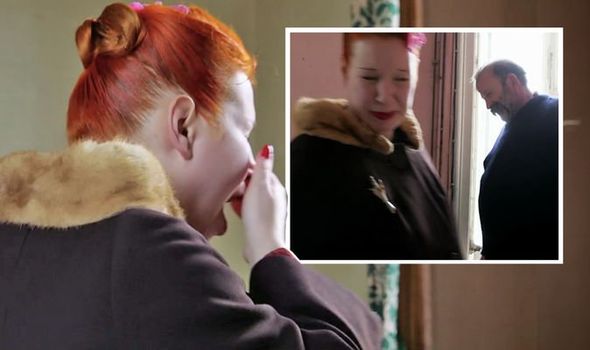 He then turned around to lift up the toilet lid and said: “Then we can actually -” And the dark water in the bottom of the toilet bowl left Angel gagging.

Dick then set about investigating where the water supply was – and the only running water came from a tap in the basement.

He was seen filing jugs up and carrying them to the bathroom in the pepper shaker and pouring into the cistern to see whether the toilet would flush.

Angel looked on in disgust as the toilet worked and emptied.

The voiceover person explained: “According to the survey, the toilet empties somewhere into the moat.”

“It’s gone from here!” Dick whispered to his wife. “I’m half expecting to look out and see fish jumping up.”

But it was all too much for Angel who left Dick to work out where the pipes led to. 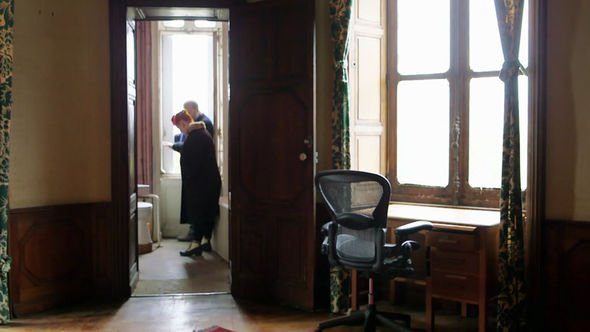 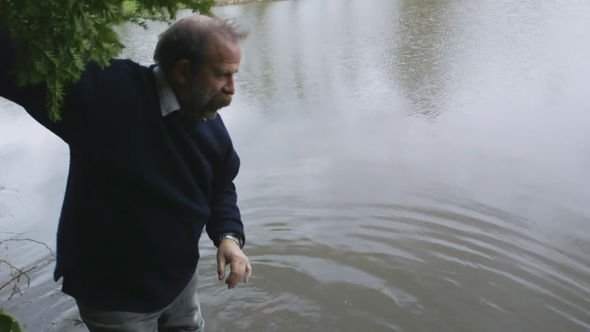 The moat is almost the same size as six Olympic swimming pools and finding a small waste pipe was not easy.

Dick explained to Angel how they needed to use ‘drain tracing dye’ to find the drain exit.

After tipping the red powder into the jug of water, Angel then poured it into the toilet bowl and as she flushed the toilet, Dick was seen searched amongst the bushes and shrubs along the edge of the moat to see if he could see the red water emerging into the moat.

“I have no idea how deep this goes,” Dick tentatively said as he entered the edge of the moat. “Angela, just keep flushing it!” He hollered at his wife who was looking out of the pepper shaker. 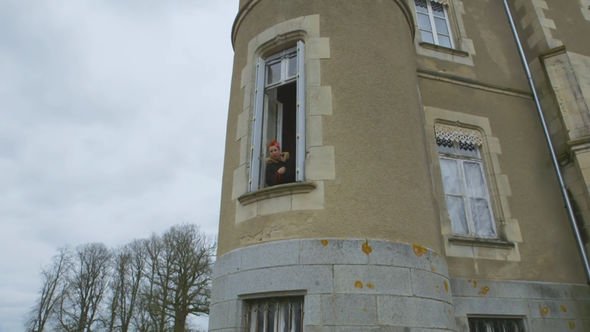 “Oh, that gets deep very quickly. Note to self, don’t step backwards,” the engineer commented.

“Nothing’s happening?” Angel asked and Dick replied: “Nothing at all darling. I should be seeing a red bloom where our flushing water has come out here somewhere. There is no red dye there.”

After managing to get out of the moat safely, Dick said to Angel: “I’m sure if this was my Chateau and I built it I would probably have the pipe going a long way out.

“In the summer, when it’s warm, I’d be in there with my swimming cozzie, searching for the pipe where the poop goes!”

While Dick was determined to find the waste pipe, Angel was focused on what interior design choices she was going to make to the inside of The Chateau.

“Renovating The Chateau isn’t just about making it habitable, Angel has a passion for vintage and is desperate to restore its faded glamour,” the voiceover person said.

“What comes first? What do you do first? I want to have it all pretty…straight away,” Angel said to the camera.

“This place is amazing, full of so much detail. One of the first things, the little lion’s heads,” she continued in reference to the staircase.

The lion’s heads were cast in iron and there were 86 of them which had been hand-crafted and adorned the double revolution staircase.

Angel also headed up to the attic and spotted bundles of original wallpaper, as well as original pieces of furniture, photo albums and magazines.

Escape to the Chateau is available to watch on 4oD now.