Eamonn Holmes shocked his GB News co-stars with a particularly savage dig at his former This Morning co-stars Holly Willoughby and Phillip Schofield.

Schofield and Willoughby have come under fire after they were given special access to Queen Elizabeth II’s coffin because they were reporting as press for a segment on This Morning.

Thousands have signed a petition calling on the pair to be sacked from This Morning, accusing them of ‘queue jumping’.

Holmes has made no secret of his ongoing feud with Schofield after he and his wife Ruth Langsford were dumped from presenting This Morning on Fridays and while reporting outside Buckingham Palace ahead of Queen Elizabeth II’s funeral, he took aim at the pair.

Holmes’ co-host Isabel Webster introduced a guest ‘who suffered that queue and they were not of any insignificant age, we’ll be talking to them after this…’

Lapping up the opportunity to have a pop, Holmes interrupted: ‘What, Holly and Phillip?’ 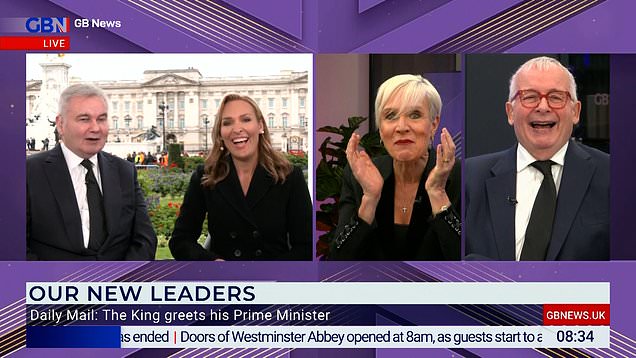 Addressing the backlash against Schofield and Willoughby, This Morning issued a statement stressing they ‘did not jump the queue’.

‘We asked Phillip and Holly to be part of a film for this Tuesday’s programme,’ said a spokesperson.

‘They did not jump the queue, have VIP access or file past the Queen lying in state – but instead were there in a professional capacity as part of the world’s media to report on the event.’

Some of their pals have leapt to their defence, including The Chase star Anne Hegerty who said critics were all being ‘extremely rude’ and Ant Middelton, who insisted that celebrities are actually ‘disadvantaged’ so we should ‘give them a break’.

Schofield and Willoughby are yet to address the criticism, but are expected to return to This Morning on Tuesday.

This Morning airs weekdays at 10am on ITV.