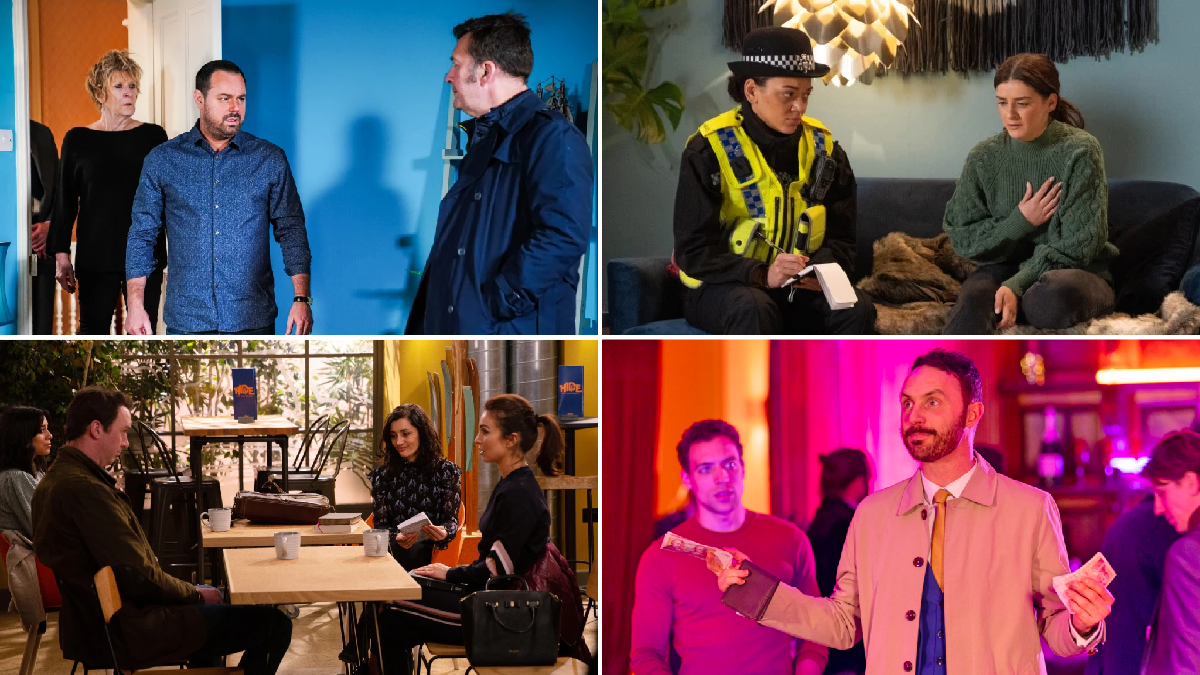 If you like your favourite soaps with an extra helping of drama then you are in for quite a treat next week.

Major developments rock all the nation’s favourite serial dramas, with the discovery of Tina Carter’s body in EastEnders being the biggest.

Coronation Street, meanwhile, sees Adam Barlow stunned by the lengths sinister Lydia Chambers is going to in order to get what she wants.

There is drama aplenty in Emmerdale as Meena Jutla continues to manipulate Charles Anderson, and Hollyoaks sees James Nightingale’s reckless behaviour spiral out of control.

Has that piqued your interest? If so, then you’re in luck, as we’ve got plenty more spoilers were that came from, what with us having handpicked the 25 biggest moments of the week.

1. Imran gives Toyah an engagement ring, she tells him she’s delighted with it. But Toyah isn’t prepared for Abi’s scathing reaction when she shows her the ring.

2. Toyah finds Abi in Victoria Gardens tearfully looking at pictures of Seb and knocking back vodka. Toyah urges her to go to a support group and Abi agrees. Later she introduces Toyah to Dean, saying he’s her sponsor. Toyah’s pleased she’s got help, but after she’s gone Dean hands Abi a bag of drugs and they laugh about how gullible Toyah is.

3. Adam assures Sarah that Lydia’s telling lies. Sarah, however, wants dates and times from Lydia of when she supposedly slept with Adam. Sarah comes to believe it’s lies, until one more trick from Lydia convinces her otherwise.

4. Adam calls at Lydia’s house asking to talk. Lydia plays the victim and shouts at Adam to leave her alone, making out she’s scared. What’s more, she’s trashed her house in a bid to set him up, claiming she’s already called the police.

5. Jon tells Emma that he’s thought about her a lot since his Ted’s funeral. He and suggests they go for a bite to eat. Emma is fascinated by him, and it’s clear he smitten with her. Faye, however, is not pleased with Emma for going on a date with Jon, reminding her that Craig gave up his career for them.

6. Chesney tells Joseph he’s prepared to let him move to Portugal with Linda. Joseph, however, is gutted. Linda explains that owing to an emergency, she’s flying back to Portugal tonight. Joseph asserts that he’ll go too, leaving Chesney and Gemma in shock.

7. They later wave goodbye to Joseph, but a confession from Hope leaves the parents desperate to stop him from leaving, as they jump in a taxi. Will they make it in time?

8. Mick tells Janine he will cancel the boxing match, leading Janine to turn to Kim for help with signing people up. Kim completes her task, promising that whoever beats Mick has free drinks for a year! Mick, horrified, asks Janine to ensure he fights the weakest person. But he soon has other things on his mind when he receives the divorce papers from Linda.

9. The Carters’ world is torn apart, as DCI Arthurs arrives, confirming that Tina’s body has been found in the Argee Bhajee. Shirley, devastated, tells Arthurs that Tina was taking money from her and that Gray said he saw her on the bus.

10. Frankie returns to the Square as the Carters process news of Tina’s demise.

11. Kat discovers that Mitch’s wages have gone missing. Her suspicions immediately turn to Tommy, and she subsequently embarrasses him in front of the bullies. Tommy, however, is adamant that he didn’t take the money, and the tension between he and his mum rises.

12. Suki is fuming to find out that Vinny has been paying Dotty’s rent and thus she evicts her again. Afterwards, she humiliates Vinny. Dotty, however, issues some stern words which leave Suki feeling guilty. She apologises to Vinny and even manages to surprise him!

13. Jean tries to support Harvey, who is nervous about signing the witness statement which would help to convict Aaron. Harvey, however, gets a concerning call from Aaron who begs him not to sign the statement. What will he do?

14. Nancy opens up to Zack about her parents’ divorce, and asks him to cook something for her. Afterwards, she leans in for a passionate kiss.

15. Charles visits Meena in prison and desperately tries to pressure her into a confession. Meena admits she killed Andrea, describing her crime in every painful detail. The vicar holds a support group for those affected by the killer’s actions. Meena, meanwhile, tries to persuade him to visit her again, but when he refuses, she bashes the phone against the wall, knowing that her plan to manipulate him has been foiled.

16. Rhona finally comes clean about Marcus to a stunned Marlon. Marlon, hurt, tells Paddy he’s unsure if he’ll ever be able to forgive Rhona. Rhona, however, insults Marlon’s ego and accuses him of victim shaming her. Marcus, meanwhile, pleads with him to not take his anger over Pierce out on Rhona. Marlon is struck deep by Marcus’ words. Rhona’s hellbent on making things right between her and Marlon and thus decides to propose to him!

17. Marcus decides to leave the village after Pierce’s will reading, but Ethan suggests they go one a date. Marcus rejects him, but Ethan isn’t one for giving up. He’s encouraged by Rhona and Marlon to pursue a relationship with Marcus, but will he be able to get Marcus to change his mind before he leaves?

18. Laurel fights tears as she realises that she’s going to have to look outside of the village in order to find a place that she can afford. Kim informs devastated Laurel that she’s found a buyer for Mulberry and that they have 30 days to vacate the property.

19. Kim asks Jai for his shares in HOP and in return says she’ll give him enough money to pay off his loan and put a deposit on Mulberry. What will he do?

20. Marlon negotiates a great deal with Mack to return to the Woolpack.

21. James resorts to an unlikely companion after Ste’s rejection. Later, his chain of recklessness continues as he decides to spend the night taking risks and bumps into a man called Rafael who takes a shining to him, but is it for the right reasons?

22. Ella insists on attending her scan without Nancy or Zara’s support. While Cleo accidentally reveals to Charlie that Ella is considering other options, Ella receives some heartbreaking news.

23. Mercedes makes a huge discovery, but she’s confident that Bobby’s version of events is the truth. Theresa pokes holes in her story and suggests getting outside help. Mercedes, meanwhile, finds a secret door in their house and Bobby makes a drastic decision. Afterwards, Bobby’s online friend is revealed.

24. Prince’s job is in jeopardy after a misunderstanding puts him in the firing line. John Paul, however, is the guilty culprit, so the question is: will John Paul come clean?

25.DeMarcus teaches Leah how to box. Leah, however, gets embarrassed about her financial situation in comparison to his. That is, until DeMarcus makes a heartfelt confession.