EastEnders: Jean tells Stacey to speak to the police

Jean Slater (played by Gillian Wright) has always been popular among fans, with her caring and positive nature providing some light relief in the show. But the EastEnders favourite, who has been in the BBC soap on and off since 2004, is worrying fans, who have predicted that she will soon die from cancer.

Jean was diagnosed with ovarian cancer in 2019, which saw her face a brutal battle with the illness before she got the all-clear.

But in Christmas 2020, she found a lump on her breast and has believed ever since that cancer had returned.

Rather than waiting for official test results, Jean decided she was once again fighting cancer.

Heart-breaking scenes in January then showed Jean making the decision to refuse treatment if she was diagnosed again. 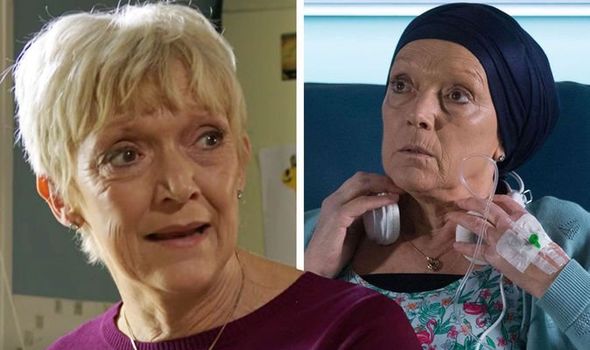 The last seen on the subject was an episode earlier this year where Jean recorded a video message to her family.

In the recording, she explains that she knows the cancer is back and will not undergo treatment this time. She also told them how much she loved them.

But since January, the issue hasn’t been mentioned again. This had led fans to speculate that Jean’s death could be sprung upon them in upcoming episodes.

Fans on Reddit have discussed the possibility that Jean’s illness could come up again and with months without treatment, they are concerned that she won’t make it.

One fan put out a prediction that after seeing her in recent episodes this week, it seems Jean’s “time is coming.”

“She [Jean] never had the biopsy as she walked out of the hospital before they did it, she has made her mind up and doesn’t want treatment because of how bad she felt before,” a commented read.

“Sadly it’s her right and the hospital won’t follow it up if she refuses treatment, so now it seems she assumes she has cancer but in reality has had no proof.”

And another Reddit user was devastated by the idea: “Jean is one of my favourite characters, and I really, really hope they don’t kill her off. Be such a shame if she goes.”

“Wasn’t expecting her to die, I just thought there’d be a follow up. She’s been shown becoming close with Sharon, I thought she would have mentioned it. Or even if we’d seen her checking up on herself or something. Just something, I guess,” someone else commented in relation to Jean’s storyline being absent from recent episodes.

The last fans saw of Jean was her trying to help her daughter Stacey Slater (Lacey Turner) in the aftermath of Ruby’s (Louisa Lytton) lies – which have seen Stacey being framed for pushing Ruby down the stairs, and causing her to lose her baby.

But viewers know that Ruby suffered a miscarriage before her confrontation with Stacey, and that although the two argued, Stacey didn’t push her.

And this evening, Jean was left devastated by the thought of Stacey serving time, and she desperately told Stacey “I can’t have you in prison again.”

Could her reaction be, in part, to do with the fact that she may not have much time left?

Jean’s family aren’t aware that she believes her cancer has returned, but if Jean still thinks she has cancer she probably wants to spend as much time with her daughter as she can.

Will Stacey’s situation force Jean to reveal the truth to her family? Or will Stacey possibly go to prison without knowing the truth?

Either way, fans are predicting the storyline to bring up some more devastating scenes in the future.

If your or anyone your know has been affected by this storyline, please see Macmillan’s Cancer Support website here for advice and support. https://www.macmillan.org.uk/

EastEnders continues on Monday on BBC One at 8pm.