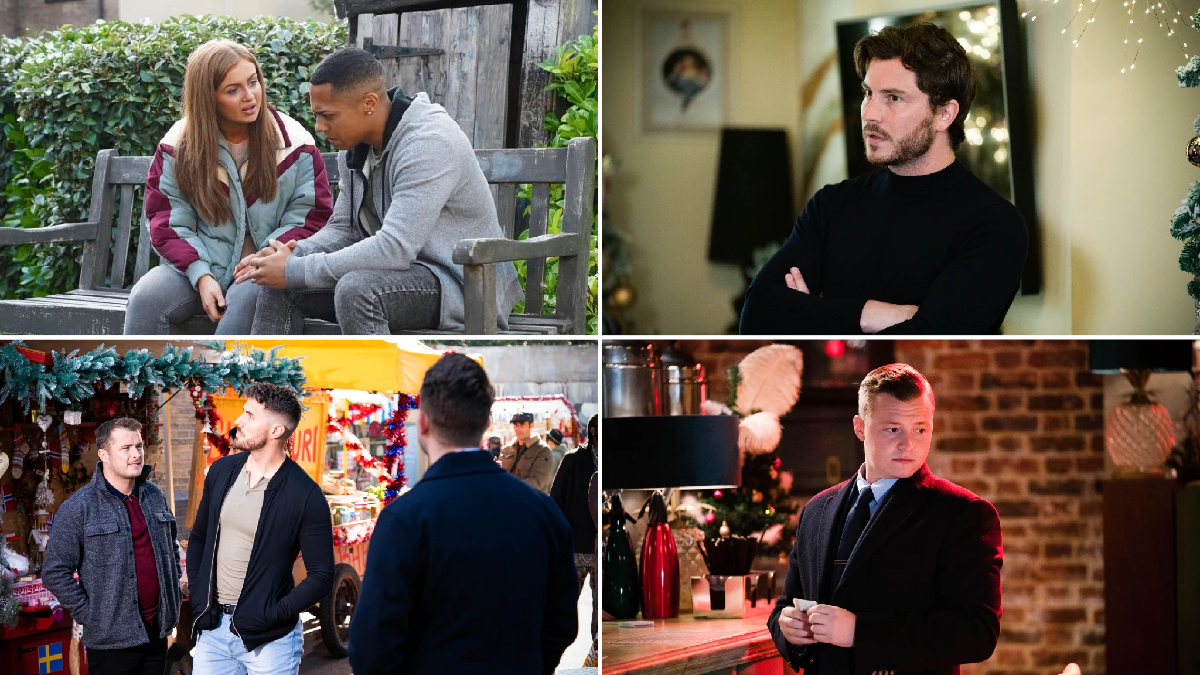 It’s a difficult week for Tiffany Butcher (Maisie Smith) in EastEnders as she sees the truth about Aaron Munroe (Charlie Wernham) – but is it too late to make amends with Keegan Baker (Zack Morris)?

Elsewhere, the temper of Gray Atkins (Toby-Alexander Smith) explodes once more and Whitney Dean is onto him.

Ben and Callum spot an attractive man at the market, but as they get to know each other, the topic of conversation takes a turn.

Kheerat encourages Ben to consider sending clients Gray’s way in return for a cut. Chelsea is shocked to arrive home to find a large man threatening Gray. Chelsea kicks the man out, but Gray angrily explains what was going on.

The police search the car lot, but struggle to find anything. Janine orders Billy to plant the stolen jewellery in Jay’s belongings.

Jay interrupts just as Billy is about to set him up. Billy covers that he’s getting rid of the necklace and later lies to Janine that he has carried out her instructions.

Under pressure from Aaron, Harvey asks Dana about her plans to convert to Islam. Dana confirms that she’s not doing so at the moment, but is leaving it open as a possibility for the future. Later, Aaron’s associate Neil accuses him of not doing enough for their “cause”.

Tiffany learns that Liam is going back to Germany tomorrow. Keegan approaches Tiffany and wants to talk, but when they end up arguing in the middle of the market, Aaron interrupts and leads Tiffany away.

Tiffany goes to answer Aaron’s phone when it rings while he’s not around. Aaron spots this, accuses Tiffany of invading his privacy and grabs her arm. Tiffany warns Aaron never to speak to her again.

The next day, Tiffany admits to Whitney that she still loves Keegan but is unsure how he really feels. Keegan expresses similar feelings to Karen. Whitney and Karen both urge Tiffany and Keegan to be honest with each other.

Ben doesn’t want to give Gray any further clients after the drama yesterday. Eve shows up with a client who needs representation and suggests this could be a regular arrangement, so Gray accepts and they start working together.

Although Gray bans Chelsea from being at the house while he has clients over, she ignores this by turning up when he’s in a meeting. This angers the client as well as Gray, but Chelsea responds by calling off the wedding.

Billy tries his best to put things right and persuade Honey to see the situation differently.

Chelsea is annoyed that Gray hasn’t apologised to her, so she remains adamant that the wedding won’t be going ahead. However, will things change when she sees a surprising text from the bank?

Later, Gray’s old boss Laura returns and gives him another warning. After Whitney sees Laura and Gray rowing, she decides to ask Laura why she fired Gray. Laura explains that Gray is dangerous and misogynistic, so Whitney and Chelsea should both stay away from him.

Neil watches Aaron, who insists his behaviour is part of a game plan to convince the Albert Square residents that he can be trusted.

Rocky has to pay Dotty’s drug dealer when she’s short of money, but Peter witnesses it. Rocky warns Dotty to get Sandy into rehab as soon as possible, but Sandy has other ideas by stealing all of the drugs from Dotty and doing a runner.

Janine senses that things are tense in Mick’s marriage to Linda.