It’s hard not to root for Camille on Netflix’s Emily in Paris.

The blonde beauty, played by French actress Camille Razat, was first introduced to audiences as Emily’s (Lily Collins) new friend in Paris and later, Gabriel’s (Lucas Bravo) girlfriend-turned-ex. The 20-something Parisian, who earns a living as a capable high-end art gallerist, became one of Emily’s closest pals as she began her new life in the French city, their friendship complicated by the fact that Emily and Gabriel secretly kissed behind Camille’s back and their mutual attraction to each other. With Camille in the dark about her beau’s messy rendezvous with her newest friend and her only flaw (and that’s a bit of a stretch) being her desire to help Gabriel achieve his dream of owning a Parisian eatery with her parents’ financial help, fans expressed their impassioned pleas that Camille frankly deserved better — sparking a social media movement on Twitter in support of the character. Just type in “justice for Camille” or “Camille deserves better.”

Though Razat is not a native Parisian (she’s from the South of France), the 26-year-old model-actress was aware of the criticisms voiced from Europeans, notably Parisians, and viewers alike about the French stereotypes and cliches sprinkled throughout the season, adamantly defending the series from its detractors. “I’m not surprised that Parisians don’t like the series. Really, I’m not surprised at all because they don’t really like to be mocked,” she observes. “It’s a cliche because it’s partly and mostly true.”

During a virtual chat over Google Meet on Wednesday, Razat addressed criticisms the show has received since its early October launch, why she believes Camille “deserves to be loved the way she loved people in the show,” the growing fan support for her character and how she thinks Camille will handle discovering the truth about Emily and Gabriel.

ET: Camille is one of my favorite characters on Emily in Paris. She’s so likable and it’s hard not to be in her corner. What did you connect with initially when you got to read more about her?

Camille Razat: When I read the script the first time… First she’s named like me, so it was like a big sign for me really. And I think I’m pretty much Camille in real life. So I didn’t have to act that much because even if I’m not perfect, we know that, but I always try to do the best for other people and for myself. Coming on the show, I always put people before me, I guess. So maybe that’s why she’s likable in the show. And [what] I really liked about her is she has this love triangle. We don’t know if she’s aware of this or not in the show, for me it’s not clear, but I played it as if she knew something was going on. So I loved the thought that she’s not binary.

Since you brought up the love triangle, it is one of the big situations she finds herself in, even though she isn’t quite aware of what might actually be going on between Emily and Gabriel. What is your personal take on the whole situation? 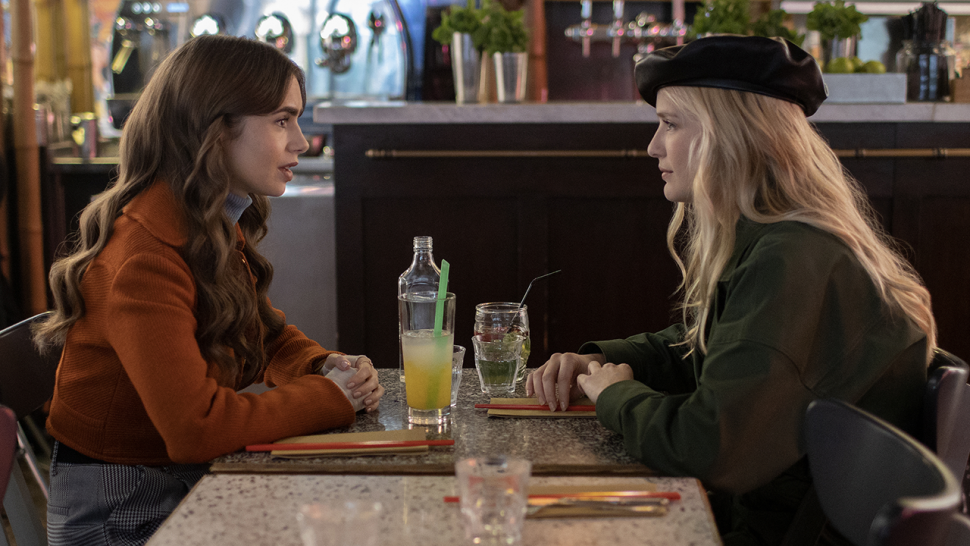 I don’t know if you’re aware but there’s a fan movement on social media where people are calling for justice for Camille. Are you aware of that and what is your response to that?

I think this new trend happens on Twitter mostly, right? I don’t have Twitter, so I don’t really follow the movement but yeah, what can I say? I am grateful to the fans that they think I deserve better and justice for me, but I don’t think there is a point where I need justice. (Laughs.) It’s just small things. In everybody’s life who happens to be cheating on, and sometimes that you have been cheating on someone too, doesn’t mean that you’re really necessarily a bad person, but yeah, I love that. I love that people take my character so seriously and say she deserves better and she deserves justice. I think it’s funny. It’s just love, so yeah. What can I say? I love it.

Camille and Emily’s friendship also seemed genuine and authentic. What excited you about portraying a positive representation of female friendship?

Lily Collins, I’m not saying that because she’s on the show, but she’s really, really genuinely a good girl. Like, she’s really a good person who’s really, truly generous. She’s not faking it. She’s an amazing actress and she’s generous when she’s playing with me. She’s not looking at herself. And that’s really the first quality for an actress or an actor, I think in my opinion, is listening to others. When I was playing with Lily, it was really easy because she’s listening to you genuinely, truly, and I am doing the same. So I think that’s why our friendship seems to be genuine as we’re real friends in life. You can’t not love her in real life. She’s adorable, I mean, for real.

Were there moments where you found yourself getting frustrated with how out of the loop Camille was with everything?

The script was so good as it is so I didn’t want to change anything to it. But for sure, it’s frustrating when you know you’ve been cheated on and you have to play the girl that doesn’t know. So yeah, kind of. I think Camille is a clever girl, and I think there are some moments I tried while I was playing as an actress, I tried to make the viewer see that maybe she’s feeling something about it. I mean, you can’t be that blind. It’s impossible! So maybe she knows that Emily’s a beautiful girl; she knows that for a fact. Maybe she knows for a fact that Gabriel is a good-looking guy too, and maybe they’ll spend, like, six years together, and maybe they’re both bored of the relationship… I’m just saying maybe, maybe she’s a little bit aware of what’s happening, but not totally. She doesn’t know that they kissed or he was cheating, but I think she can feel something.

The season ends on an unresolved cliffhanger where Camille calls Emily after finding out that Gabriel is actually staying in Paris at the restaurant. What do you think is going through her mind?

She might be a little angry at Gabriel obviously, because he doesn’t tell her that he’s staying. So that’s a bad, bad move. I think she will be going to Emily and needing her as a friend and she will be craving for affection. But I also think Camille’s a really strong woman. She doesn’t need anybody to stand for herself, we can see that in her job. I mean, at this age working in art at that level, it means that you’re good and you’re clever and you can stand for yourself. So I just think she will be really getting close to Emily, maybe ignoring Gabriel. And then we will see what happens. 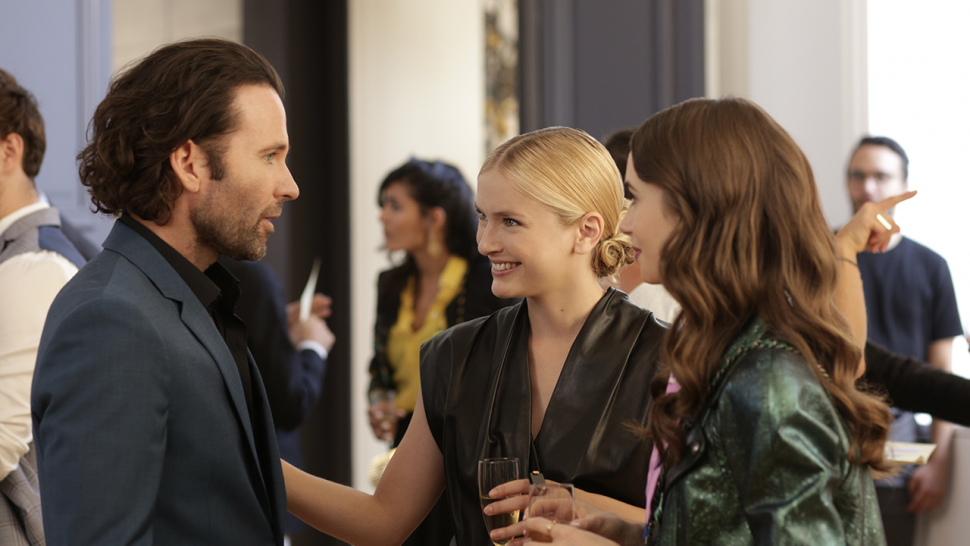 You got to film in so many amazing locations in Paris. Did you have a personal favorite and is there a place you’re hoping to film at if there is a season 2?

Lucas said the same thing, so I’m not being original, but obviously the L’Atelier des Lumières, with the Van Gogh exhibition. It’s a place really near to my home that I go really often, and just shooting in that place was amazing because when you get there in normal life, it’s always crowded. So you don’t get to see the art as you can see it when it’s empty while we were shooting. It was my favorite place really. And also my parents’ house, come on! I want to get back there. I want to stay there drinking champagne. That’s all I want to do.

The show has received a bit of a wave of criticism in regard to the French stereotypes and archetypes featured in the episodes. How do you respond to the critiques the show has gotten?

As a person, I don’t care about criticism. I think it’s good to have criticism because it’s a democracy, you know? But in a way, Parisians, they lack self-humor. I don’t know the word [in English]. I think that they think that we did the series to mock them, but it’s really not the case. We just wanted to do something young and fresh and a good moment you can spend with us. It was not about criticizing a country or culture or people. And I think that people are taking this too seriously about cliches, because it’s really just fun. So, what I have to say is just relax. Take it easy. It’s a show that’s here for you to enjoy, and if you don’t, just get to another series.

But at the same time, I’m not surprised that Parisians don’t like the series. Really, I’m not surprised at all because they don’t really like to be mocked. I’m not Parisian, I’m from the South of France, so I have the regions where I like to make fun of myself. That’s my humor. But yeah, it’s called a cliche. It’s a cliche because it’s partly and mostly true. So yeah, people think that they really feel like the tone is sometimes quite absurd, but that’s what we wanted. It’s not random. We wanted it to be kind of absurd sometimes and funny, but like comedy, comedy. And I think that people, if they [look at it with] an intellectual vision, it’s not the right thing to do. It’s just to have fun because in these times, everything is so tough. Everything is so dark. We need light and we need fun. That’s all I’m going to say.

Do you have any personal desires for season 2?

Emily in Paris is streaming now on Netflix. For more on the series, watch ET’s exclusive interviews with the cast.

Chrissy Teigen shares heartbreaking reason she posted intimate photos of losing son in emotional essay
We and our partners use cookies on this site to improve our service, perform analytics, personalize advertising, measure advertising performance, and remember website preferences.Ok