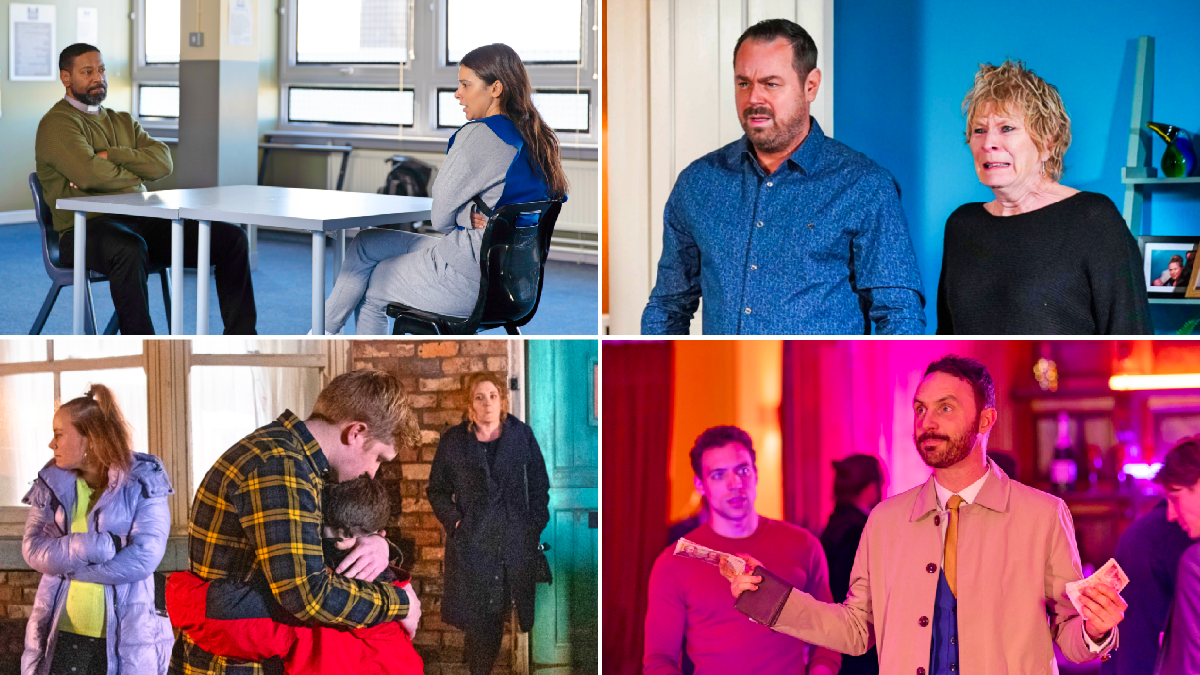 If you like your soaps with an extra helping of shocks and surprises, then you’re in for quite a treat, as the nation’s favourite serial dramas are lining up another unmissable week.

Emmerdale killer Meena Jutla might be behind bars, but make no mistake she’s still scheming, and her new plan involves none other the eponymous village’s resident vicar Charles Anderson.

The Carters, meanwhile, receive the worst news imaginable in EastEnders, as they discover that their beloved Tina is dead, after her body is found.

Strictly Come Dancing winner Rose Ayling-Ellis also makes her grand return to Walford, but Frankie Lewis’ joy will be short-lived in the wake of the tragic news.

Coronation Street sees Abi Franklin continue to spiral out of control after she takes drugs once more.

Speaking of spiralling out of control, James Nightingale’s recklessness continues in the wake of Marnie’s death in Hollyoaks, and upcoming scenes will see him take many more huge risks.

It’s set to be an unforgettable week in the land of soap, and here’s all the must-see moments you’ve got to look forward to.

Toyah finds Abi drinking vodka and urges her to go to a support group. Abi agrees, and later introduces Toyah to Dean. She claims that Dean is her sponsor and that he’s agreed to help her through her addiction. Toyah is pleased but as Dean hands Abi a bag of drugs, they share a laugh about gullible Toyah is.

Adam assures Sarah that Lydia is telling lies. Sarah, however, wants dates and times from Lydia of when she supposedly slept with Adam. Sarah comes to believe it’s all lies, until one more trick from Lydia convinces her otherwise. Adam calls at Lydia’s house asking to talk. Lydia plays the victim and shouts at Adam to leave her alone, making out she’s scared. What’s more, she’s trashed her house in a bid to set him up, claiming she’s already called the police.

Chesney is adamant that he’s only got Joseph’s best interests at heart, as he prepares to let him go, waving him and Linda off in their taxi. Fiz, meanwhile, urges Hope to tell Chesney what Joseph said to her. Hope does just that, telling Ches that Joseph didn’t want to go to Portugal but he felt like they couldn’t afford to keep him. Chesney realises he’s made the worst decision of his life, and thus wastes little time in setting off for the airport.

Mick tells Janine he’s planning on cancelling boxing match, leading Janine to turn to Kim for help with signing people up. Kim completes her task, promising that whoever beats Mick can have free drinks for a year! Mick, horrified, asks Janine to ensure he fights the weakest person. But Janine’s plan ultimately backfires. Mick, however, has other things on his mind when he receives the divorce papers from Linda.

The Carters’ world is torn apart, as DCI Arthurs arrives, confirming that Tina’s body has been found in the Argee Bhajee. Shirley, devastated, tells Arthurs that Tina was taking money from her and that Gray said he saw her on the bus.

Jean tries to support Harvey, who is nervous about signing the witness statement which would help to convict Aaron. Harvey, however, gets a concerning call from Aaron who begs him not to sign the statement. What will he do?

Charles visits Meena in prison and desperately tries to pressure her into a confession. Meena admits she killed Andrea, describing her crime in every painful detail. The vicar holds a support group for those affected by the killer’s actions. Meena, meanwhile, tries to persuade him to visit her again, but when he refuses, she bashes the phone against the wall, knowing that her plan to manipulate him has been foiled.

Rhona finally comes clean about Marcus to a stunned Marlon. Marlon, hurt, tells Paddy he’s unsure if he’ll ever be able to forgive Rhona. Rhona, however, insults Marlon’s ego and accuses him of victim shaming her. Marcus, meanwhile, pleads with him to not take his anger over Pierce out on Rhona. Afterwards, Rhona is hellbent on making things right between her and Marlon and thus she decides to propose to him!

Marcus decides to leave the village after Pierce’s will reading, but Ethan suggests they go one a date. Marcus rejects him, but Ethan isn’t one for giving up. He’s encouraged by Rhona and Marlon to pursue a relationship with Marcus, but will he be able to get the newcomer to change his mind before he leaves?

James’ chain of recklessness continues in the wake of Marnie’s death, as he decides to spend the night taking risks.

With Luis by his side, he bumps into a man called Rafael – who takes a shining to him. But is it for the right reasons? That is the question!

Just how much will James lose as he ends up in a casino?