Faith (played by Sally Dexter) made her grand return to Emmerdale last week after leaving the village over a year and a half ago following a dispute with son Cain Dingle (Jeff Hordley). The matriarch of the Dingle clan has certainly ruffled some feathers upon her return to the ITV soap, with the family divided over whether the battle-axe should be allowed to stay. However, it was the way she was going to make her exit that left fans confused as they noticed she had been drinking alcohol for the entirety of the episode.

The plot hole was uncovered towards the end of Monday’s instalment when Faith was getting ready to drive her hearse out of the village.

She was initially stopped in her tracks by daughter-in-law Moira Barton (Natalie J Robb), who told her to stay and face up to her issues with Cain.

Seeing her mother-in-law stood by the vehicle, the farmer said: “This is the point where you tell me I’ve read it wrong and you’re not leaving. Have you even said goodbye to Chas [Dingle] or to Cain?

“It’s for the best. I heard you all before in the pub,” Faith replied, referring to a discussion where the Dingle clan were considering turning their backs on the matriarch.

Moira hit back: “Listening in, were you? Have you ever really listened to your son?” to which the returnee said: “I know my own children.” 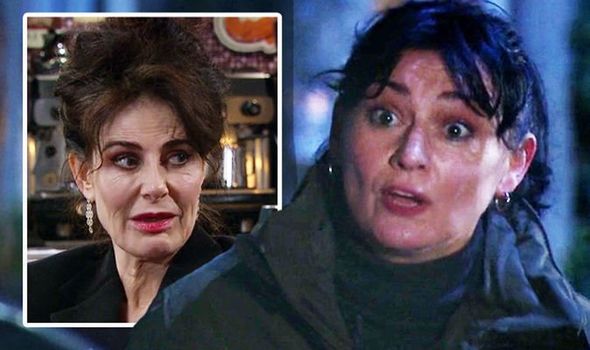 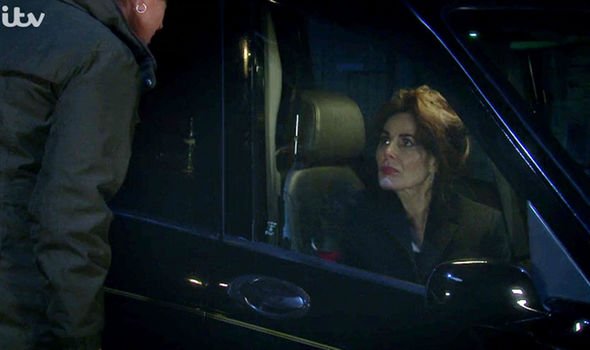 “Well, my marriage is on the line, did you hear that? Why do you think I voted how I did?” the farmer asked her mother-in-law.

“Why do you think I’m risking everything by even talking to you now? You can’t let him down. You promised.

“You said you were here to make things right. He won’t admit it but he needs that, he always has,” Moira continued as she pleaded with the Dingle matriarch.

Faith replied: “It’s too late,” but her daughter-in-law isn’t having any of it as she said: “Oh, come on you haven’t even tried. You’ve barely lasted a day.”

After it seemed the mother-of-two had truly given up, she told the farmer to “love” her son the way she couldn’t. 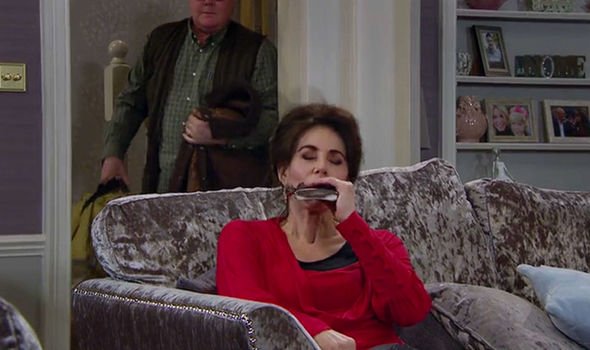 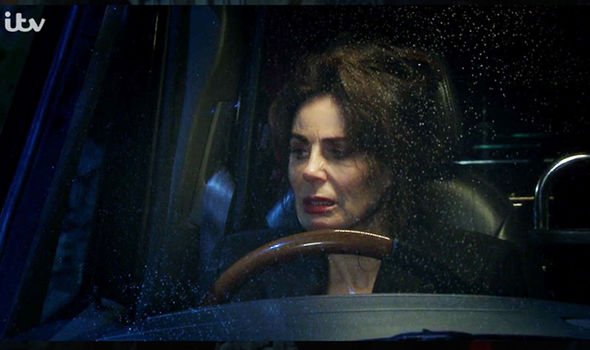 Surely she isn’t going to drive

A furious Moira declared: “No, no, no. You don’t get to say that. Yo don’t get to walk away because I know what this will do to him.

“You spent decades knowing leaving your children was wrong but you’re getting it wrong now,” she added, with Faith telling her Cain wanted her dead.

“No, Cain wants his mother to love him and I know you do, Faith, I can see it,” the farmer remarked as her mother-in-law got into the hearse.

Now talking to Faith through a window, Moira added: “Stay, you can do this. [This is your] last chance to save your son.

The mother-of-two was then seen pulling her seatbelt over her chest and starting the ignition, suggesting she was going to drive away from the village for good.

It’s yet to be seen if she has a change of heart or just how far away from the Dales she will get but fans were confused over the fact she even could get behind the wheel.

Having been sipping on a flask of alcohol all day, one viewer wrote on Twitter: “Surely she isn’t going to drive after drinking #emmerdale.”

Another concerned fan posted: “Faith will crash, surely after all the drink she had #Emmerdale.”

“Been drinking all day now she’s going to drive #Emmerdale,” a third shared on the social media site, indicating a huge plot hole in her exit plan.

It was revealed last month the iconic character would be making an unwelcome return to the village so it seems this won’t be the last viewers see of Faith.

Teasing the drama to come, producer Sophie Roper said: “I’m delighted to see the return of much-loved character Faith Dingle to the village.

“A character bursting with fun, Faith’s certainly set to ruffle a few feathers and will test the Dingle’s loyalties like never before. We’re absolutely thrilled to welcome Sally back to Emmerdale, an actor exuding vibrant charm.”