Escape to the Country: Sonali Shah apologises to guest after ‘moment’ with husband

Escape to the Country: Buyer hugs Sonali Shah during viewing

Sonali, 40, was on hand to help Hertfordshire couple Jan and Alan find a new home in the rural coastal county of Devon. The presenter explained to Escape to the Country viewers “buying a house isn’t as expensive as you think” in this part of England and she was certain to find the pair their dream home. It seems she exceeded expectations as Alan was blown away by one particular property and showed his gratitude to the BBC presenter.

The moment came as Sonali showed the couple the second property of the episode, after hearing what they wanted from their dream home.

Jan and Alan explained they wanted a property containing three bedrooms but would be happy to settle for two if they were big enough.

Alan also wanted a place he could turn into a workshop with Jan expressing an interest in somewhere with a nice garden she could work on.

They also expressed they wanted a property with a cottage aesthetic and a lovely kitchen they could enjoy entertaining in.

With a budget of £350,000, the presenter had some work to do but she was sure she had found the perfect home as she took the couple to their second viewing. 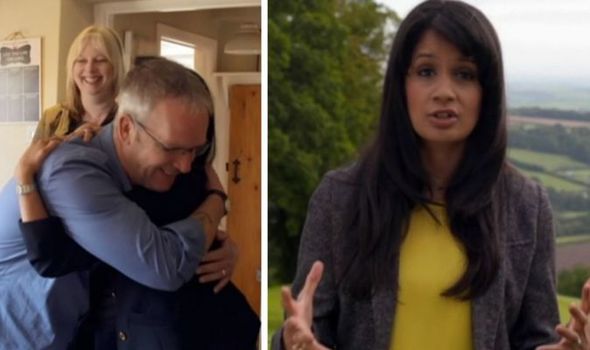 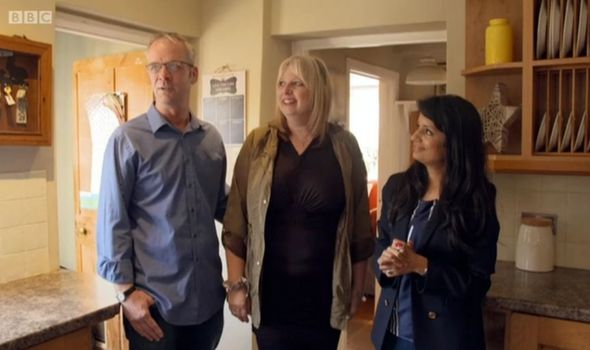 Property number two was located in the Devonshire village of Winkleigh and was positioned in the centre of the sociable setting.

From the outside, the establishment did not look like a cottage and this was because it was previously a shop that was converted into a residence in the 1970s.

As soon as they walked through the door, the couple were blown away by the extensive interior of the house.

With two reception lounges situated at the front of the house, Alan and Jan were blown away by the size of the property.

What lit up their eyes, even more, was when they saw the kitchen which contained a large stove oven. 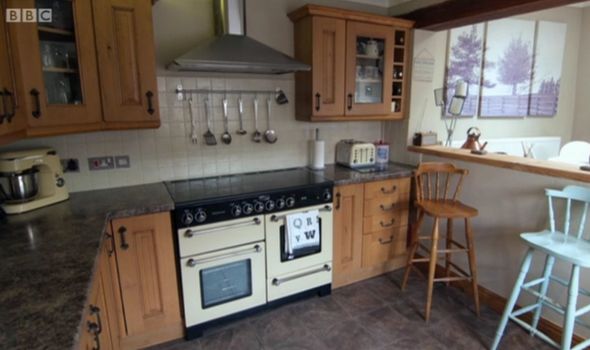 I love I got a hug

Clearly impressed, Alan reached out for a hug from Sonali, who humbly accepted the act of gratitude.

However, the presenter apologised to Jan: “Sorry, we’re just having a moment,” although the guest wasn’t too phased.

The conversation quickly moved on to the view the couple would be able to see if they were washing up at the sink.

“I love how you’re planning your life here, already,” Sonali remarked as she listened in to the couple picturing themselves living in the property.

After claiming the house was “ideal”, the presenter said to the couple: “I love I got a hug for that cooker.” 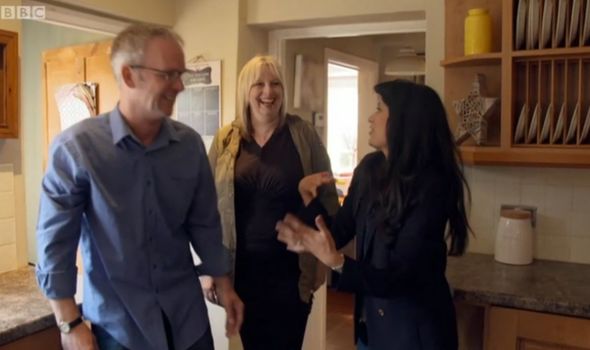 As well as the property having lots of bedrooms and a side annexe for guests, Sonali said it was a home “ready to move into”.

However, she was keen to show the couple the garden as she knew this would have been a make-or-break for Jan.

Not only did it have a patio with a built-in barbecue, but it also contained a lawn that Jan could work with to grow more flowers.

A shed was also located at the back of the garden and the presenter suggested Alan could turn it into a workshop.

Both husband and wife were pleased with the entire property and it seemed it would’ve been hard to pry their eyes away from it.

Once the viewing was complete, it was time to talk numbers and Alan was sure the property was way above their budget.

Sonali told them it was on the market for £325,000 and therefore, it was well within their reach to buy it.

“Can we move in now?” Alan asked the presenter, before adding: “I could see Jan and I living here very happily.”

Jan said: “We’re very enthusiastic about the house. Alan tends to throw his emotions in [when he likes something].

“Whereas I stand back and take time to decide on something,” she continued and adding she was full of admiration for the property.

By the end of the programme and having seen a mystery property, the couple came to a decision about their future.

They explained to Sonali they had booked a second viewing for property number two as they were keen to put an offer in.

Before the end credits rolled, the presenter explained Jan and Alan had put in an offer and it was accepted.

Unfortunately, they were beaten at the last minute by a cash buyer who went on to purchase the property outright.

Escape to the Country airs weekdays at 3pm on BBC One.