Chloé Zhao would like to make one thing clear: The action scenes in “Eternals” are hers.

In recent years, some have suggested that the ability to use previs — that is, previsualization — allows special effects artists to sort out action scenes in 3D animatics long before production, while directors focus on other aspects of the story. Zhao relied heavily on previs for “Eternals,” which follows a team of cosmic superheroes across many millennia and action scenes that traverse beaches and cityscapes alike. However, she said she was involved in the process from the start.

“From day one, Marvel said, ‘Here are the tools we use. We need your version. We don’t want three different movies we want your movie,’” Zhao said in a recent interview with IndieWire. “They would be there to help me because I’ve never used these tools.”

On paper, Zhao is not the most obvious candidate to take on large-scale CGI action scenes. The “Nomadland” director is known for poetic understatement and naturalistic performances, not the kind of explosive showdowns found in the latest installment of the Marvel Cinematic Universe.

However, Zhao said she was keen on figuring out a way to import the gliding camerawork found throughout her work into every aspect of the movie. “The camera is very grounded and exists in the real world even during the action sequences,” she said. “The way the camera moves is very consistent with intimate scenes of people walking through a field. … Previs became something for me to explore ideas with.”

Zhao shrugged off speculative reports about Marvel courting filmmakers by telling them that they wouldn’t have to worry about action. In 2018, Argentinean director Lucrecia Martel said in an interview that she passed on directing “Black Widow” after the studio told her that the action wasn’t her concern.

“What they told me in the meeting was ‘we need a female director because we need someone who is mostly concerned with the development of Scarlett Johansson’s character,’” Martel said at the time. “They also told me, ‘Don’t worry about the action scenes, we will take care of that. I was thinking, well, I would love to meet Scarlett Johansson but also, I would love to make the action sequences.’”

Zhao sounded unconvinced. “I would probably say that the myth is not quite true and I think I’m not the only filmmaker who would say that,” she said. “My God, for a year and a half, three times a week for a couple hours a day, I was sitting in front of a big screen making decisions for every detail of how visual effects could look in the real world.” 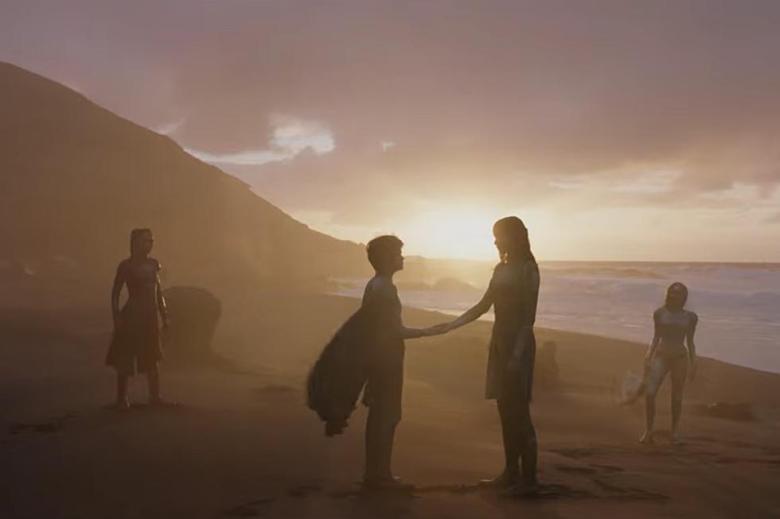 The experience brought her back to her original interest in animation. “I drew stick figures and storyboards manually for all the scenes, including all the visual effects scenes,” she said. “I boarded action scenes. I had incredible filmmakers and artists to help me realize these things.”

However, she added, plans often changed once she arrived on set. (“Eternals” was largely shot at on location, rather than soundstages.) “When you get there a couple of days before shooting, you need to look at the weather and the space. You need to be inspired by that location,” she said. “I wanted a logical way of moving the camera.”

Terrence Malick’s “Tree of Life” was a big influence on many scenes set in vast outdoor spaces, but Zhao said the visual style was equally informed by “2001: A Space Odyssey” and “Blade Runner 2049,” as well as Ridley Scott’s “Prometheus.” For one big fight scene in the Amazon, she scrutinized “The Revenant.” Yet Zhao was careful to distance herself from those reference points. “When I talk about these movies, it’s a way for me to pay tribute to all these incredible filmmakers who shaped the way I am,” she said. “We’re not trying to be like these filmmakers or even compare to these movies.”

Instead, she said was mostly focused on finding inroads for techniques she honed in her first three features, “Songs My Brother Taught Me,” “The Rider,” and “Nomadland,” all of which were predominantly populated by non-actors. “I didn’t ask my cast to watch other movies or tell them how to think about their characters,” she said. “I very much said, ‘Here are the edges, here is the sandbox, play inside and please show me who the characters are.’ Not that different from how I worked with Fran or Brady in my previous films.”

“Brady” is Brady Jandreau, the indigenous newcomer at the center of “The Rider,” and “Fran” is Frances McDormand. The actress spent the past year and a half campaigning for “Nomadland” to win Best Picture even as Zhao continued to put the finishing touches on “Eternals.” McDormand encouraged Zhao to take the opportunity for a brief break when she was offered the chance this fall to serve on the jury for the Venice Film Festival, where “Nomadland” had won the Golden Lion one year earlier. Bong Joon Ho served as jury president.

“Fran constantly told me that if you get this opportunity, go,” Zhao said. “It’s the best time to enjoy films. When you go with your own, it’s not enjoyable. It’s terrifying. On the jury, we were watching three films a day in different languages and genres.”

Ultimately, the jury selected the French abortion drama “Happening.” Zhao seemed disappointed that the movie wasn’t the country’s official Oscar submission, but stood by the jury’s choice. “’Happening’ is a film everybody should see,” she said. “It’s incredible.” But the main accomplishment was the festival itself, which she was still gushing over. “With director Bong, my gosh,” she said. “To sit together and talk about films everyday, and coming from a place of respect and appreciation for these films that were made with everything going on in the world — it was an incredible experience.”

Disney will release “Eternals” in theaters on Friday, November 5.