We’re into the third episode for Season 5 of Fear the Walking Dead and things are… well, let’s see, shall we?

The gang is out back down the zombie roadblocks someone set up, radioing back to Luciana (Danay Garcia) when the roadblock is down.  She’s marking positions on a map and it’s showing there’s a big perimeter around–something.

What that something is, we don’t know — at least not yet, but it’s there.  Morgan (Lennie James) is out on his own and Alicia (Alycia Debnam-Carey) is driving Luciana around because she still can’t use her right arm. 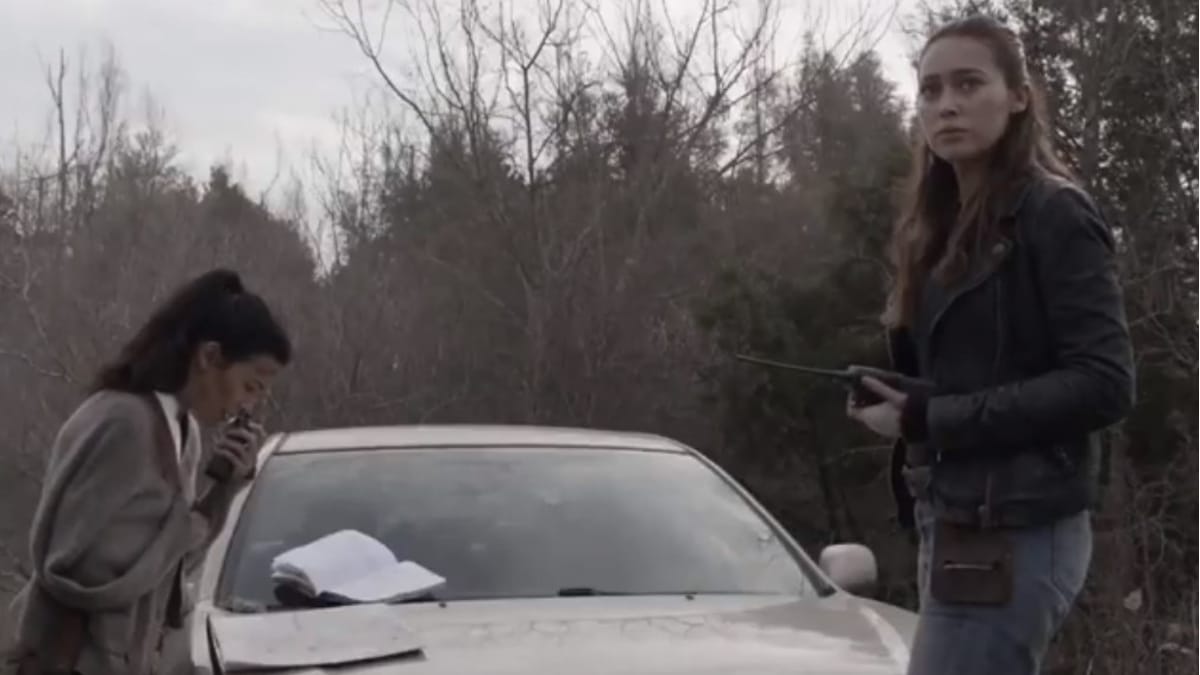 But as John (Garret Dillahunt) points out to June (Jenna Elfman), they need to find Al (Maggie Grace) quickly, because the longer it takes, the less of a chance they have.

He knew this was true as a cop back in the real world and it’s even truer now.  So it’s time to cut down this next roadblock…

Shootout on the highway

And this is when someone starts blasting away at June and John. Though whoever it is isn’t a good shot. They get in the car and blast through the roadblock, heading into The Forbidden Zone, for want of a better word.

See, the problem they have with someone shooting at them is that they don’t have a lot of weapons and ammo. The same goes for encountering whoever is inside this zone.

Just then John sees a sign on the side of the road and tells June their luck just changed for the better.

Welcome to the Gulch

That’s because they’ve just pulled into Humbug’s Gulch, which is meant to represent some Old West town that never really existed because there’s a real lack of dysentery and typhus floating about the joint.

John tells June he used to work at one over in Nacogdoches, doing trick shooting and that these are located all over the state (which means my hypothesis that they might be in Arkansas is way wrong).  It also means that since they’re all laid out the same, he knows where they can find the extra guns and ammo. 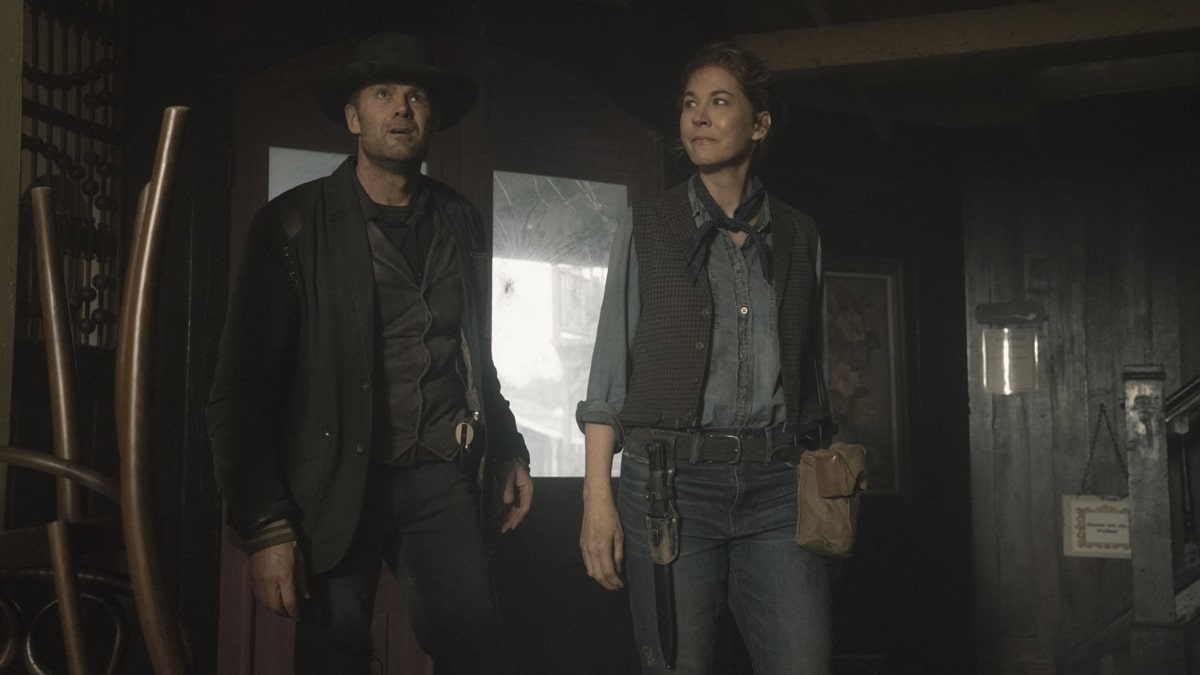 Sure enough, upstairs in the opera house, they find a locker with pistols, a rifle, and a shotgun, as well as ammo for all.

While John is loading the pistols–some require more than just putting rounds in the cylinders–June starts asking questions about what John did at these places, even asking him about a “San Antonio Split” and other things on a handout for things to do while here.

John doesn’t want to talk. He just wants to get their weapons prepped and lure the dead away from the door so they can get back on the road.

With the help of a wind-up player piano, they get out of the opera house and make their way to the car.

And that’s when some a**hole starts shooting at them again.

Said a**hole is really screwing things up.  He’s shot out a couple of the tires on the car, making it unusable and the gunfire is drawing the dead out of the opera house.

Oh, and there’s a sandstorm–didn’t I mention the sandstorm?  Yeah, there’s one blowing through the Gulch, reducing visibility and making it hard to breathe.

So with their simple plan having now turned into a total s**t show and June taking cover, there’s only one thing for John to do — return fire.

He sees this crazy person shooting at him and runs him down.  Only here’s not there–well, not in front of him.  The guy comes up behind John and puts a gun in his face.  And that’s when we see — it’s Dwight! 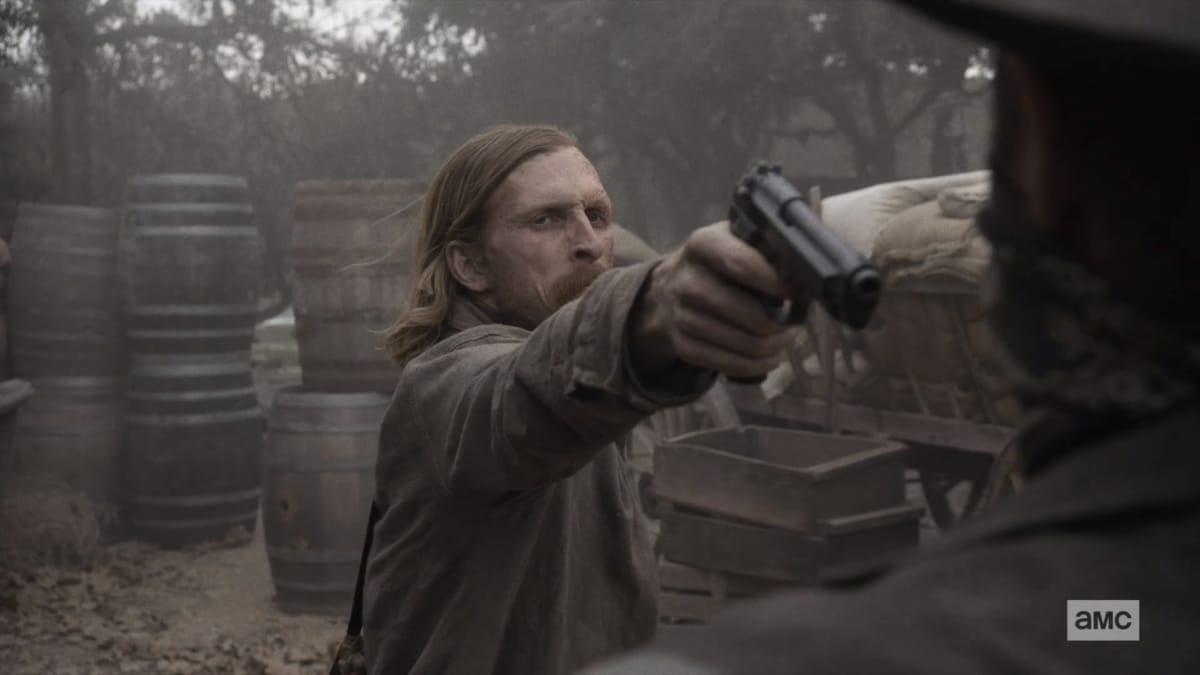 Yes, Dwight (Austin Amelio, whose name wasn’t shown until the end credits) from the Saviors has arrived in Texas and he’s pointing a gun in John’s face wanting to know what he did with “her” and “where is she?”

Of course, John has no idea what this idiot is blabbering about, so Dwight isn’t getting any answers–but he does get a rifle butt to the back of the head when June comes up from behind and whacks the s**t out of him.

Back in the opera house, they have Dwight tied up. John can tell the dude is running on empty and isn’t in good shape since he couldn’t shoot right. He was just doing the old “spray and pray” hoping to hit something.

Dwight finally wakes up and we learn he’s spent the better part of a year looking for his wife Sherry–who, you know if you watch The Walking Dead, he was supposed to kill–and her trail has led him to Texas.

He’s been trailing June and John because her last note led Dwight to the car they were driving.  Dwight thinks she’s dead. John’s like, hey, I thought June was dead but it didn’t keep me from looking for her.

And because he went through that same process, he knows about the dark place Dwight’s in right now.  So he doesn’t think he’s dangerous and unties him, letting him know that they’ll help him find her.

Why things never go according to plan

Dwight has a working car, so the plan is to sneak out an upstairs window and make their way across the rooftops to safety.  That lasts for all of about a minute before Dwight–who has some of the worst impulse control in the Walking Dead universe–jumps to the ground and runs for June and John’s car.  There’s a lot of shooting and while Dwight gets to the car, he’s drawn all the dead around him.

June and John are in the other car and start talking to Dwight over the radios.  Turns out there’s nothing in the car from Sherry and Dwight has hit a dead end.

He wants to know where the car was found and he’s told it was found at Camp Radioactive Zombies, but there wasn’t anyone there. He figures he’s reached the end of the road and it’s time to kill himself, as there’s nothing left for him.

But June figures it out.  She tells Dwight he’s probably feeling like he doesn’t deserve to find Sherry and there was a time when she felt that way about herself. That she kept running from John because the thing they’d had together for a short time was good and it was something she didn’t deserve.  But she knows better now and she’s glad they’re together again because love is important.

Dwight decides not to blow himself away but he made so much commotion that he’s now surrounded by the dead. He’s told not to worry. When the path is clear, run for it.

Then, June and John get out of the car and start shooting zombies, clearing that path. 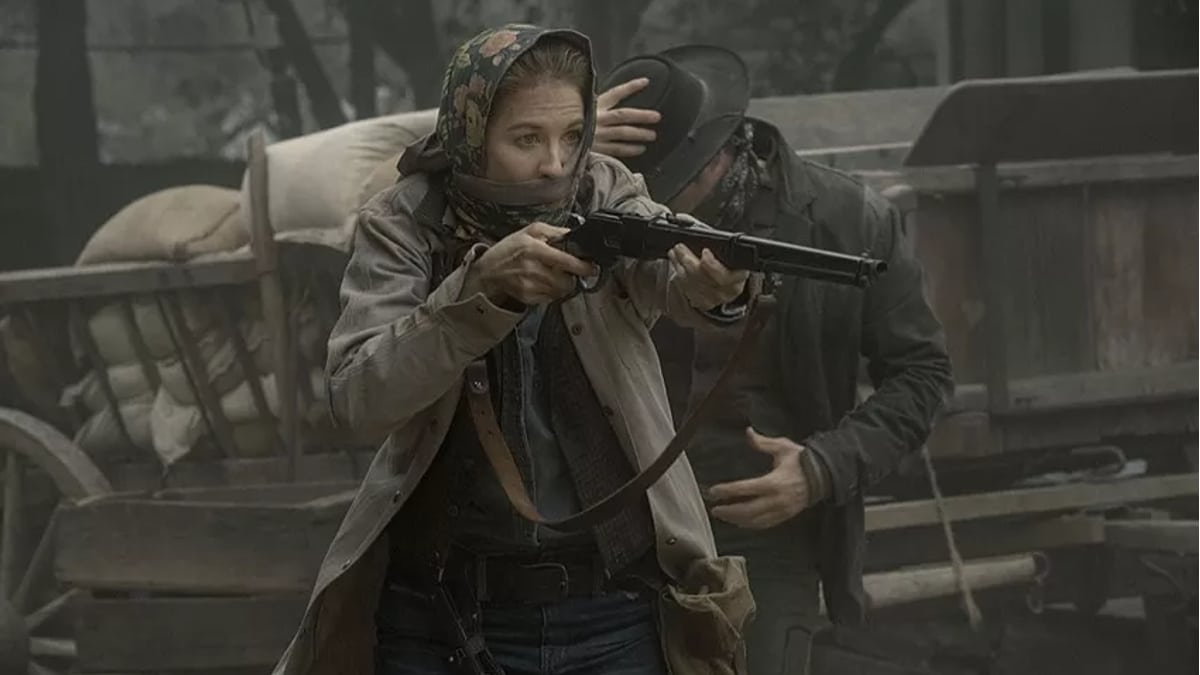 The path is clear and Dwight almost gets away, but a zombie he hacks–I’m sorry, a “walker”, a term he used earlier that John had never heard–falls and pins him to the ground.

While two more zombies advance, John tells Dwight to hold up the ax he’s carrying and John shoots the blade head-on, splitting the bullet and taking out both zombies.  He tells June, “That’s a San Antonio Split.”

After nightfall, John checks out the car they were driving and tells Dwight the message she left on the registration, that paper is from another car. He used to be a cop and he knows how to check VINs.  So the chances are good that Sherry’s out there and they’ll find her.

June and John share a moment together. He’s glad June said the things she did and, it turns out, John has wondered if he’s worthy of her love. Now that they’ve worked that out, it means these two are probably going to die horribly before the end of the season because we can’t have nice things. 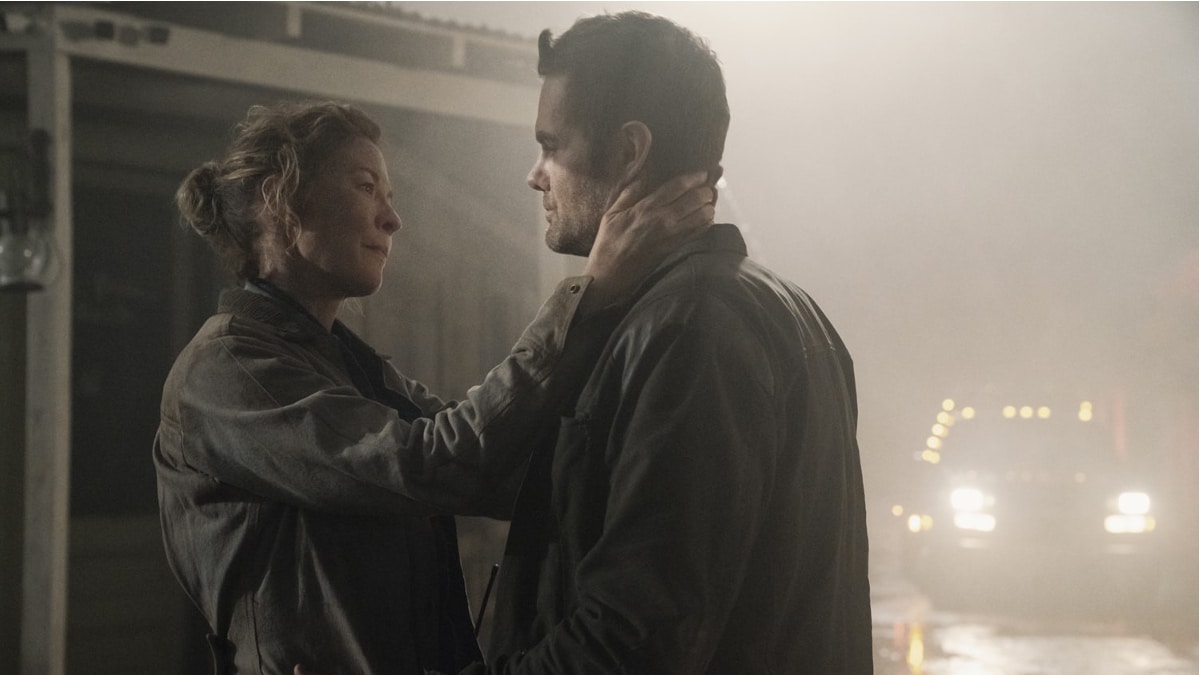 Alicia, Morgan, and Luciana show and Morgan and Dwight meet, both giving that “What the hell are you doing here?” look.

Dwight is worried Morgan won’t accept him, but Morgan knows how bad it had been for Dwight and tells him not to worry, that everyone’s looking to change.

And that’s when Alicia gets a call on the radio.

See, while they were out, she kept trying to do as Morgan said–which is to help people–and spent time trying to contact those crazy kids they met in the first episode.

She let them know she can probably feel what they’re feeling because she lost her mother and brother and the hurt’s still there.  So let us know where you are and we’ll come get you and help.

They tell her to met them “where we last met”, which is the truck stop, and back on the road they go.  It isn’t long before they encounter the van, which is covered in blood and entrails, and inside they find Dylan (Cooper Dodson), who is covered in blood.  It doesn’t look good for his brother and sister.

Dylan’s siblings at that moment are setting up another zombie roadblock.  While Annie (Bailey Gavulic) and Max (Ethan Suess) are concerned that Dylan will snap and squeal, they figure he’ll last long enough that they can find out who these people really are, who really took their friend–and then fix it so those meddling adults will leave them alone for good. 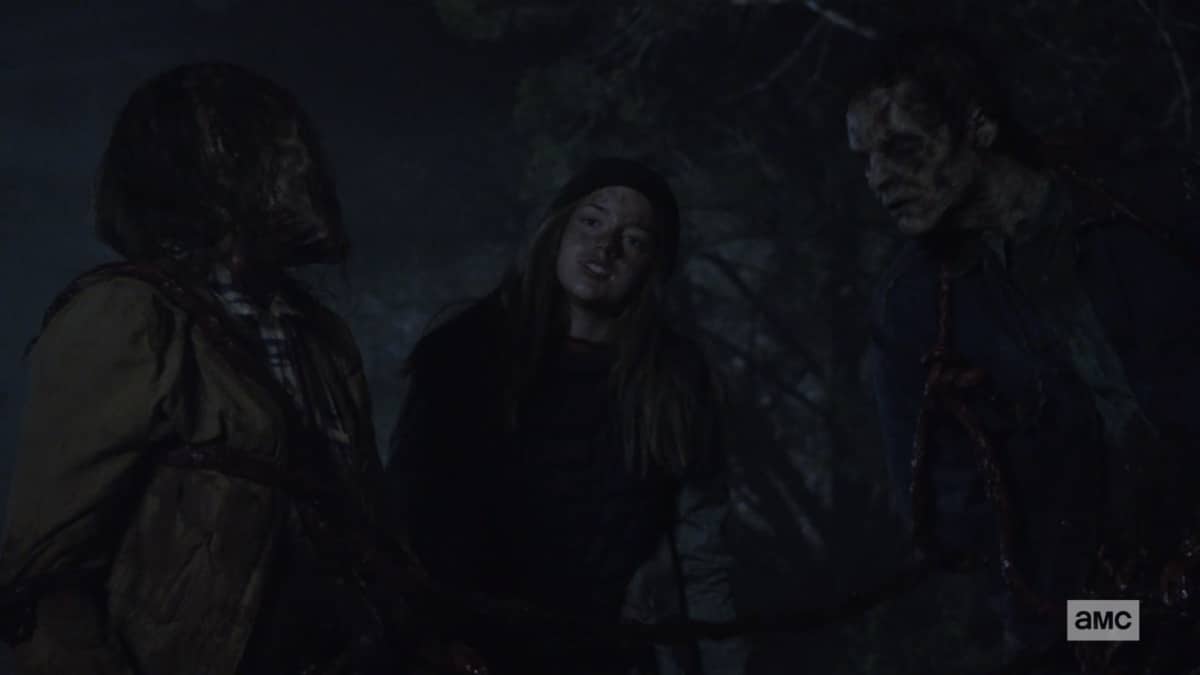 Fear the Walking Dead airs Sundays at 9/8c on AMC.

Do you have something interesting to say about this? Start or join a discussion on our forum!