‘Game of Thrones’: Weta Digital Came Up Big With the Deaths of Rhaegal and the Giant Wight

After winning its first Emmy last year for the zombie polar bear in “Game of Thrones’” penultimate Season 7, Weta Digital became integral to Season 8, contributing more than 600 VFX shots for the epic battles propelled by dragonfire and the large-scale destruction. They notably animated 30,000 zombie Wights and thousands of Dothrakis with simulated, flaming swords for Episode 3’s The Battle of Winterfell, and developed new tech for combining fire and water simulation for the ambush of Dany’s (Emilia Clarke) fleet in Episode 4 and her vengeful destruction of King’s Landing in Episode 5.

But the most spectacular Weta achievements involved the deaths of beloved dragon Rhaegal in Episode 4 and the giant wight by Lyanna’s (Bella Ramsey) dragonglass dagger in Episode 3. These would’ve impressed the legendary Ray Harryhausen. “Dragons were pretty well established [by Image Engine and Pixomondo], and we needed to bring them into our pipeline and make sure they were looking great with all their muscles and physicality work,” said Weta VFX supervisor Martin Hill.

“The big dragon shots for us were some of the design challenges around Rhaegal’s death. He gets hit by one of the scorpion bolts in the chest and, from the beginning, you’re not sure he’s gonna make it. So the previs was three separate death shots where he gets hit by the various bolts. But we consulted with [production VFX supervisor] Stefen Fangmeier and combined them into one sweeping camera shot around and our animation supervisor, Dave Clayton, came up with that beautiful orbiting move.” 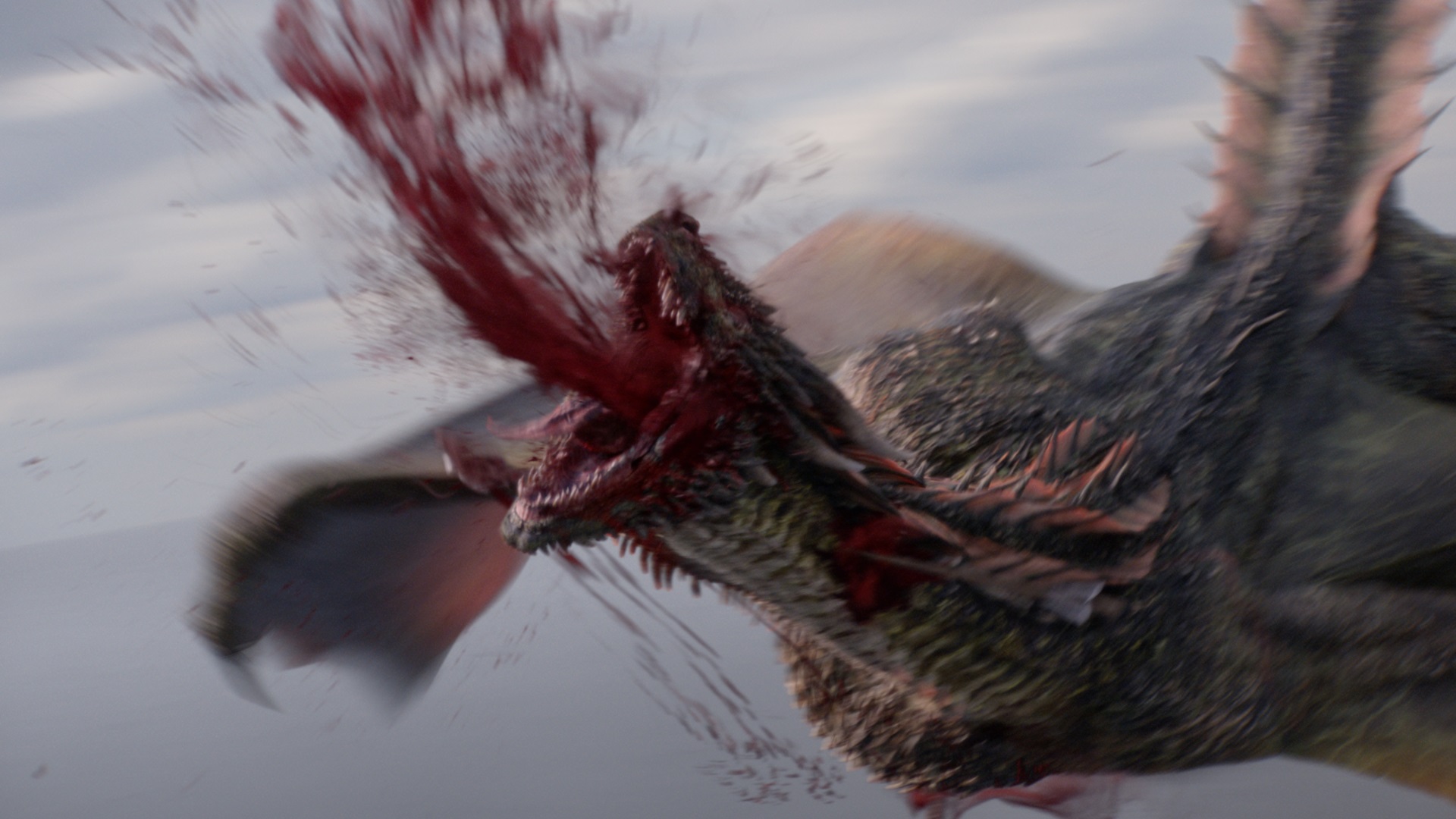 This elevated the shocking demise of Rhaegal into an agonizing, bloody ballet. He’s struck by three large bolts from Euron’s (Pilou Asbaek) Scorpion. “The bolts are so large and powerful that the third to pierce Rhaegal’s neck spells his doom, and he plunges into the water below,” added Hill. “So you really got a good look and felt the impact of the bolt through the neck as the killing blow.

“And to emphasize that further, we thought, as we’re coming past the head, it would be a great addition to have him scream out his last breath and all the blood in his system gets thrown out through his mouth in this big spray towards camera. It’s really one of those situations, where in dailies, we’re looking at sims and thinking how we can put more blood in here and add more, add more to really make it a large impact.”

And Weta appreciated the freedom to be bold, not only with the dynamic camera move and the impact of the bolts piercing Rhaegal, but also with the graphic blood simulation. “It was interesting,” Hill said. “There are a lot of films that we do where we have to pull back on the blood, not make it red, but with ‘Game of Thrones’ you can really go to town with it.” 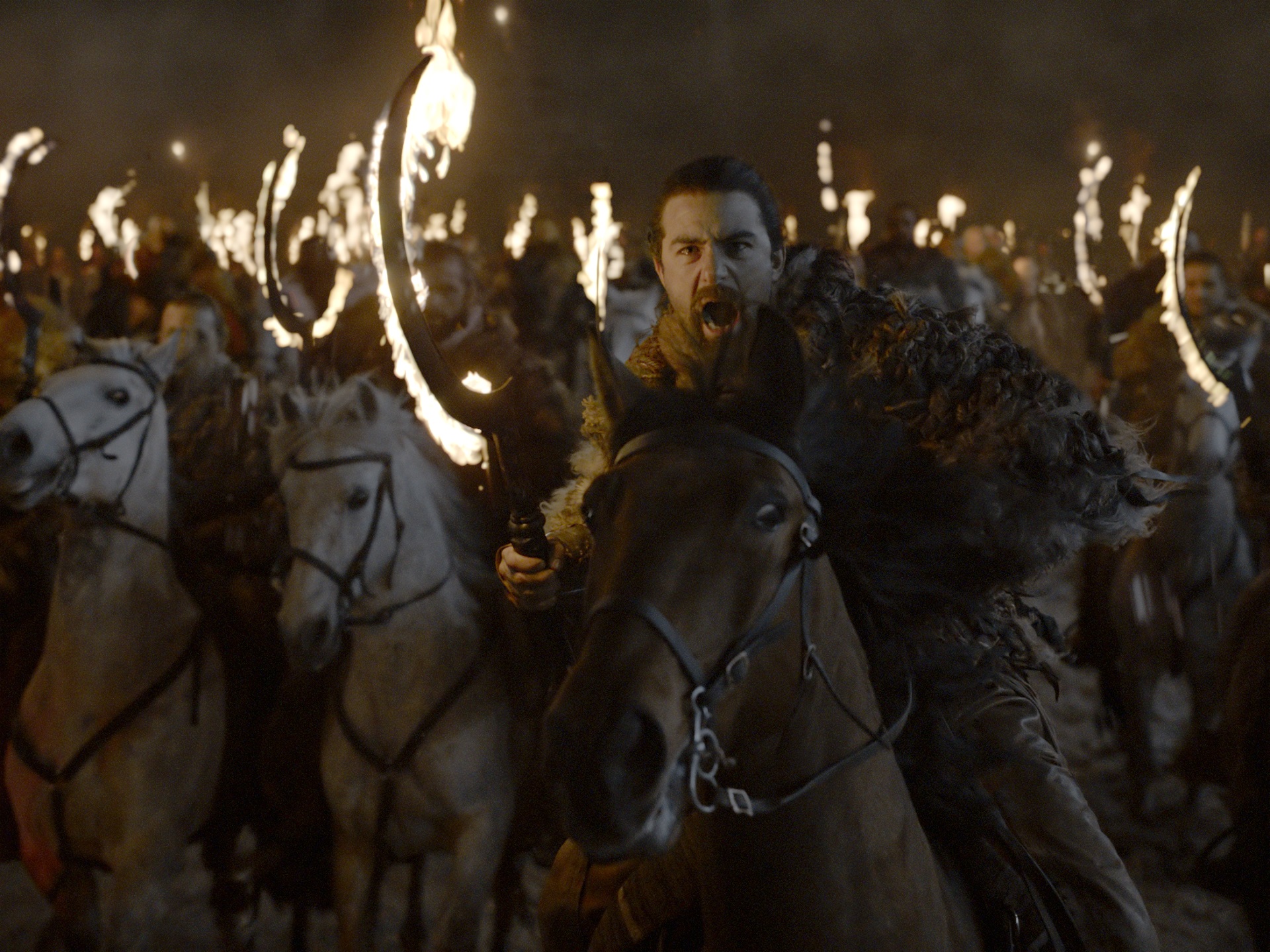 Meanwhile, the destruction of the 15-foot giant wight (called Crum internally by Weta) was one of the highlights of Episode 3’s hour-plus Battle of Winterfell. Like other Wights, the giant withers away, yet required more volumetric destruction because of its enormous size. They shot a heavily-costumed on-set actor (Ian White) with forced perspective, and Weta matched him with various scans, and then built layers of CG cloth, hair, skin, tissue, muscle, bone, and the internal organs. Then it became a process of reverse animation with everything crumbling and falling out.

“We dissolved the skin with a cracking system, which we also used for the bones and the internals as he fell apart,” Hill said. “We then used a targeted simulation for when his head falls and rolls to camera, and then the shots afterwards of getting the right amount of disintegration.”

Lyanna being crushed by the giant after the initial impact of the stabbing required a separate round of animation. Weta remodeled her body in CG along with Crum’s hand and added blood gushing out of her mouth. “He holds her and brings her up to his face and there was an idea that he’d crush her, but we thought it was more dramatic if we saw her armor being crushed,” Hill said. “It was getting the armor and animating Crum’s thumb to properly crush the armor like a tin can. It was brutal but quite fitting in the ‘Game of Thrones’ world.”