Like the moments preceding any trainwreck, things started off innocently and slowly on Sunday’s Insecure.

A lovey-dovey Nathan and Issa checked out a spacious two-bedroom bungalow together. Unfortunately, they were so busy kissing and dreaming about the future, the listing agent rented it to someone else while they were still standing there, and they rightfully cussed him out. Over at Molly’s job, Taurean came in early to be made partner at their law firm, and Molly was ecstatic for him.

The two were a little too ecstatic and affectionate in their hugging and staring, and when they maladroitly walked away, their coworkers Felicia and Stacy whispered about their undeniable sexual intimacy. Oh dang. Over at Lawrence’s place, he and Chad talked about Lawrence possibly putting down some roots and buying a house. But where is Lawrence working now? That would’ve been fun to find out.

Instead, Chad excitedly talked about Derek and Tiffany’s going-away party and the expensive briefcase he purchased for Derek with his girlfriend Leah’s help. That’s when Lawrence said he didn’t think he would be attending the get-together because Issa would be there and he didn’t want to deal with the awkwardness of running into her again. 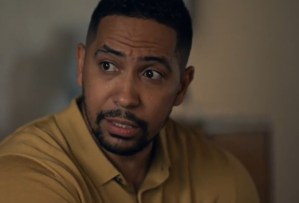 But Chad wasn’t trying to hear that. He told Lawrence he should attend because he hadn’t bothered to fight for Issa when she broke up with him, so things should be copacetic. When Lawrence asked Chad to clarify his comment, Chad said Lawrence always sits back and lets life “happen to him like he’s on the ‘Dock of the Bay.’” (Now, that’s one brilliant Otis Redding and San Francisco reference.)

While a slightly stunned Lawrence sat there and mentally masticated the verbal grenade Chad dropped on him, Chad quickly changed the subject and started ordering quiches on a mobile app. Classic Chad. Suddenly, the big day arrived with Issa and Nathan strolling into the party together. Tiffany’s parents’ house was stately and palatial (of course), and both were impressed.

When they approached Tiffany, Derek and Kelli at the party and made small talk about the move to Denver, Derek asked Nathan if he wanted a toaster, which served as the perfect segue for Issa to mention they’d been looking for a home and would be living together soon. The trio congratulated Issa and Nathan, and then Molly walked up hand-in-hand with Taurean, her new boo. 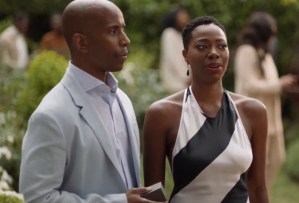 Taurean didn’t realize there would be kids attending the party and decided not to give Derek and Tiffany the gift he’d brought for them, which was a box of weed gummies. And it’s totally cool to change your mind about a gift, but Taurean’s about-face was so clumsy, he made Kelli, Derek and Tiffany stare in confusion. When Molly took him aside to see what was up, he told her, and the two ate a couple of gummies in celebration of his promotion.

That same candy made Molly laugh inappropriately (until Kelli slapped her), scream loudly upon seeing her ex Dro and then embarrass Dro about their past sexual relationship and his open marriage while introducing Dro to Taurean! The two lawyers also gorged themselves with finger food and ran for cover in a nearby pantry.

The best part about the gummy candy was Molly’s unfiltered honesty. Molly told him she was afraid he would tire of her like her past boyfriends had, but Taurean admitted he hated her when they first met, so it was all uphill. Besides, Taurean said, he really liked her now. Molly was so touched, they started kissing and getting it on in the pantry. Hot! 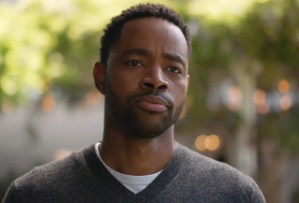 At least Molly was having a great night. Issa, who had a weird encounter with Condola, was not, and neither were Lawrence and Nathan. The two men had “casually” argued about which city had better barbecue — Los Angeles or Houston — and Nathan later complained to his boy Aric that Lawrence was messing with him. Nathan also got in a few digs, especially when he intentionally mentioned he couldn’t cut Ahmal’s hair because he and Issa were moving in together and looking for a place. Yikes. Did you see Lawrence’s face?

Not one to be outdone, Lawrence approached Issa and asked why she called him, and Issa said it was a mistake. Lawrence then asked Issa if she was happy because he loved her and wasn’t happy without her in his life. As Issa was telling Lawrence it wasn’t the time and place for that discussion (so she’s not happy?), Nathan walked up and asked what was going on. Issa tried to play it off, but Lawrence’s chest puffed up and he said they were having “a conversation.”

The two exchanged violent shoves, and Taurean had to break it up. Taurean walked away with Lawrence while Nathan snapped at Issa, pushed her away and said he needed a moment — as the whole party stopped and watched in wonder.

What did you think of this vicariously uncomfortable installment? And do you think Issa really is happy with Nathan? Drop your thoughts in the comments.