If you’ve noticed a lot of music documentaries hitting your favorite platforms, that groundswell is driven by record companies like Universal Music Group looking for ways to invigorate their catalogues. So it makes perfect sense that a musician’s son like Hollywood super-producer Frank Marshall (the “Jurassic Park,” “Bourne,” and “Indiana Jones” series) — who has long been Hollywood’s fave party DJ, worked on Martin Scorsese’s The Band documentary “The Last Waltz,” and plays a mean guitar — would move into the space.

Marshall has directed a few features over the years (“Arachnophobia,” “Congo”) and started producing non-fiction series and features (“The Gift: The Journey of Johnny Cash,” “Laurel Canyon,” “McCartney 3, 2, 1,” and “Sinatra: All or Nothing at All”) before moving into directing with “The Bee Gees: How Can You Mend a Broken Heart” and “Carole King & James Taylor: Just Call Out My Name.”

There’s no question Marshall can afford to do whatever he wants with his time. He still devotes his day job to shepherding the latest “Jurassic World” and “Indiana Jones” sequels, and feeds his documentary appetites in his spare time.

Over the decades, Marshall has forged any number of strong relationships in the music business. About six years ago, his close friend, Jody Gershon at UMG, introduced him to Steve Barnett, the new CEO of Capitol Records, where Marshall’s father had worked as a producer/arranger/conductor back in the ’50s. Marshall met Barnett at the top of the remodeled Capitol Records Tower, where he had whiled away many childhood hours, and the two threw around some ideas for documentaries.

Forthwith, Barnett cooked up a meeting with Bee Gees’ Barry Gibb, who hit it off with Marshall, who is about the same age. That yielded the hit 2020 Bee Gees documentary “How Can You Mend a Broken Heart” for HBO. For that film, Marshall hired the producers of Ron Howard’s music documentary, “The Beatles: Eight Days a Week — The Touring Years,” Nigel Sinclair’s White Horse Pictures, who showed him the ropes of finding the Holy Grail of music documentaries: unseen footage.

Documentarian Alex Gibney, who directed “The Armstrong Lie” for Marshall, watched him move from producer to director. “He’s a great producer,” said Gibney, “but it turns out he’s pretty good director. He always had a great love for music, and now he’s gotten the documentary bug. As filmmaking, it’s more free-form and improvisational. It’s freeing from the dictates of a rigid production schedule.”

“I had been dabbling in documentaries since 2010,” Marshall told IndieWire during a recent interview. “I did one of the first [ESPN] ’30 for 30’s — my other love is sports. I discovered how fun they are, and how free they are to make.” A non-fiction producer or director can juggle several documentaries at different stages of production and shoot here or there, as time permits, “because it’s more editorial, obviously. But it’s like a treasure hunt. You’re discovering things every day: we’re going in an archive or got a shoebox under the bed with some 8mm film.”

He needed these archive skills on “Jazz Fest,” which is a history of the New Orleans music festival, interspersed with lively archival and concert footage and old and new interviews. Marshall celebrates the film in a current timeframe. Back in 2018, Marshall was on the road in Denver with Jimmy Buffett, who he first met through fellow pilot Harrison Ford in Aspen in 1980 at a New Year’s Eve party. “We’re all back at the hotel,” said Marshall. “And he’s known Quint Davis, who’s the co-founder of Jazz Fest. Jimmy’s been there a lot.” 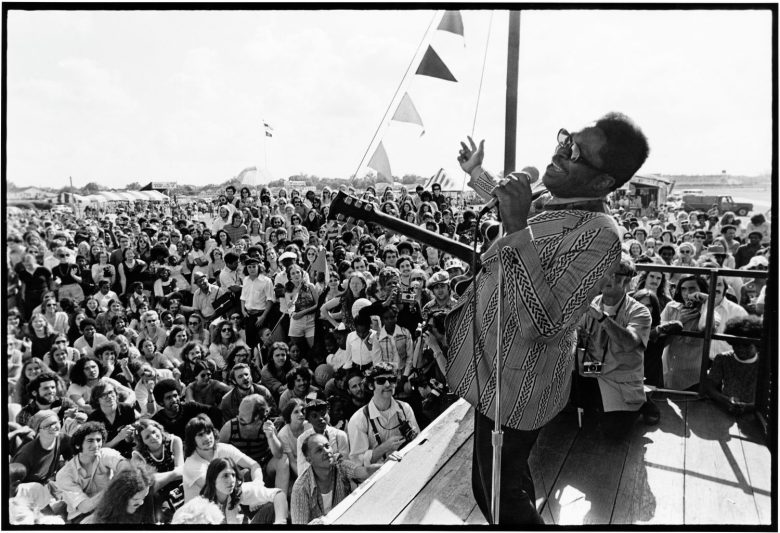 Buffett and Davis wanted to do something special for Jazz Fest’s upcoming 50th anniversary, so Marshall looked into what he could put together. “They had some archival things, like footage of [co-founder] George Wein and Hayley Jackson at the very first festival,” he said, along with the young maverick Quint Davis, learning on the job. His guidance was essential to the documentary.

Marshall interviewed Wein in 2019, two years before he passed, as well as musical patriarch Ellis Marsalis, Jr., who performed on the piano at Jazz Fest with his sons Branford, Wynton, Delfeayo and Jason just before he died in 2020.

Davis agreed that the film needed to include not just established stars like Bruce Springsteen, Katy Perry, B.B. King, and Wynton Marsalis, but up-and-comers like Tank and the Bangas and Boyfriend. “So we did a blend of old and new,” said Marshall. “This festival isn’t just old boomers revisiting their favorite music, it’s vibrant. The festival encompasses and embraces everything: all the different kinds of music, culture, food. It’s all there. But you can’t shoot all of it. We had three camera crews. It was a challenge of logistics and scheduling.”

At a festival that is already overwhelming in its scale with multiple performances and venues over ten days, “you can’t possibly see everything or hear everything,” said Marshall. “But you can experience everything: it was madness and glory happening all around you. There’s like 100,000 people there on a big day. This was such a joyful experience. And it was my first.”

The two directors divvied up shooting a couple of songs for each of their favorite performers, with three crews running six to eight hi-def cameras, drones, and three IMAX cameras, adding up to about 30 people. Marshall wanted dibs on Sonny Landreth, “because I love the blues,” he said. “And when you see him play slide guitar, there’s nothing like it. So we chose the music and the acts we wanted to see. And then a couple of them, like Earth, Wind and Fire; Jimmy Buffett; and Pitbull, we brought all the cameras together, because we wanted to cover everything.”

The team shot for eight days, six for the festival footage and two back at the hotel for interviews, where it was quiet. The movie includes two festival high points: Springsteen singing “My City of Ruins” to the hurricane-battered New Orleans audience, and the festivals’ perennial closer, Aaron Neville, crooning a soulful “Amazing Grace.” “It was powerful,” said Marshall. “And, it was hope. That’s what I want the movie to be. I want it to be hopeful that we can get through these disasters and pandemics and whatever else is thrown at us. With music.”

Marshall loved hanging in the editing room with Martin Singer, who blended the old and new into a potent gumbo, enhanced by the ace sound team at Skywalker. “I wish we could have done the entire performance of each of the songs,” said Marshall. “I do want it to be musical, but the challenge was weaving in and out the interviews with the particular group or artist and and then how to keep the pace going. So it didn’t get boring or too historical. And you still got the full flavor and feel of the music.”

Sony Pictures Classics picked up the film for theatrical distribution after Marshall screened the movie for them in late 2020. “We kept pushing the release date back,” said Marshall. “It was supposed to come out in January 2022 and now there’s 40 films lined up on the runway waiting to come out. I didn’t want it to stream. Eventually it’ll stream, but this is a movie that needed to be seen and heard on a big screen with an audience. We’ve postponed the release date three or four times now. We were supposed to be in Palm Springs. We had to cancel that. And then I got to see it at SXSW. So people were dancing in the aisles.”

Being together, both while making and watching the film, is essential to Marshall. He hated not being able to visit the sets during the pandemic. “I love to be on the set,” he said. “I love to make the movie. And I haven’t been able to do that for two years. I never got to ‘Jurassic.’ I never got to London. In 2020, you couldn’t travel. But even on ‘Indiana Jones,’ when I was there, it wasn’t any fun. Because you have a mask on. You can’t joke around. And then you’re problem-solving from the office. Probably by the end of the year, we’ll be back making movies the way we used to. And then I’ll be happy.”

As for the future of movies, Marshall is confident in a robust future: “Everybody’s discovered that we need movies in the theaters first,” he said. “Moviegoers are anxious to get back into the theaters. There’s no better way to enjoy this movie, for example, than in a movie theater.”