Ranvir Singh and Charlotte Hawkins interviewed Tom Bower on Good Morning Britain today and discussed the possibility of Meghan Markle running for President of the United States of America sometime in the future. Kicking off the conversation, Ranvir wanted to know whether or not the former Duchess of Sussex had a realistic chance of standing.

“Meghan Markle is dipping her toe into politics slowly but surely,” Ranvir began. “And whether this idea of her ultimate ambition to run for President, is a realistic ambition for her?”

Tom replied: “Well, I think she is clearly someone who is very interested in politics and I do think she would like to influence the world.

“I think that she is well placed with friendships with [Barack] Obama and ex-President [Bill] Clinton, so she would be well place to get onto the democratic ticket in California – there are 53 representatives there, most of them democrats and she could run for one of them.

“I think she’s got the right basis for it because she’s ambitious and she has a lot to say,” he added. 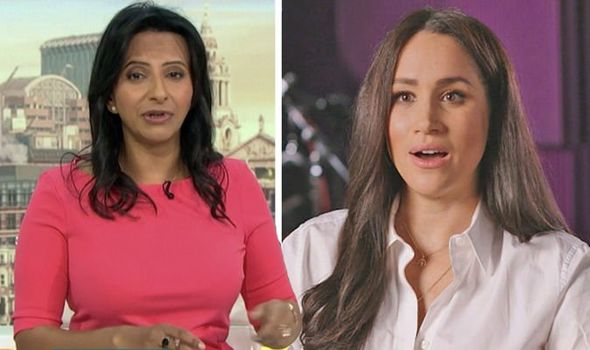 “I think her problems are, first of all her sensitivity to criticism and other things.

“But in the end, I think what she’s managed to do with the Oprah Winfrey interview which trashed the royal family, but gave her a global profile, she is now known across the world at the expense of the royal family.

“And that is the first to a political career and she’s done that very successfully,” Tom commented.

Ranvir then said Donald Trump was a president who was ”sensitive” and “brittle” and questioned Tom on whether this would really be a “barrier” for Meghan.

“He overcame it so she will have to,” Tom replied.

He went onto say she would need to prove she is capable of conjuring “policies on China, trade, immigration” but she had enough “money” and was in the “right place in California” and as a “woman looking for a role in the world” perhaps it was to “change the world”.

“All she has got to do is distance herself from the royal family more,” Tom continued. “She might need to drop the title of Duchess as that doesn’t sit well with Americans.”

It comes after rumours have been circulating about Meghan running for President in 2024.

A close friend to the former senior royal told Vanity Fair: “One of the reasons she was so keen not to give up her American citizenship was so she had the option to go into politics.

“I think if Meghan and Harry ever gave up their titles she would seriously consider running for president.”

But another “well-placed source” commented: “While there’s no denying she is interested and engaged in politics as a topic, she harbors no ambition to enter a career in politics herself.”