Jeny Batten as Ursula on Disenchantment Part 2: What is a forest selkie and who plays her? 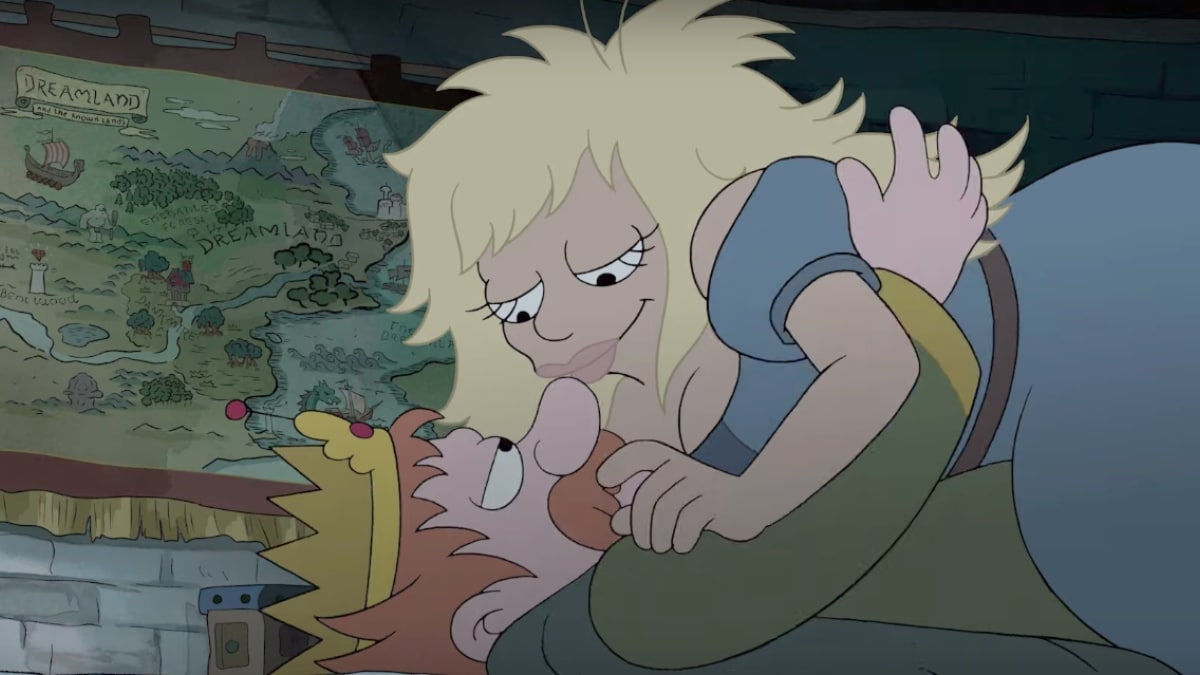 Spoiler warning for Disenchantment Part 2. In the second outing of the show, King Zøg finds himself lonely in Dreamland after having his wife betray him a second time and getting a divorce from Queen Oona due to that. That’s when he finds himself seeking the love of someone but has trouble finding it in royal blood.

He discovers a strange woman/mythical creature named Ursula in the woods called a forest selkie and the two hit it off immediately. The episode has fans wondering, what is a forest selkie?

Here is everything to know about forest selkies and the actress, Jeny Batten, who plays Ursula on Disenchantment.

What is a forest selkie from Disenchantment?

Not much can be said about a forest selkie because it seems to only be invented for the show. That said, a selkie is a real folklore creature in “Irish, Scottish, Icelandic, and Scandinavian mythology,” according to Celtic Rings.

The creature is quite similar to Ursula’s from Disenchantment, with some differences. A selkie in Celtic mythology is actually of the sea and when in water takes the form of a seal. The selkie maintains the look of a seal even on land, as long as it has the skin. Once it sheds its skin, then it becomes the form of a human — just like on Disenchantment, only Ursula becomes a woman when she sheds her bearskin.

There are other parallels in the show as well about the relationship between selkies and humans. Ancient Origins describes the control a human can have over a selkie once they possess their skin and by doing so, most stories portray this as being a forced marriage between selkie and human.

And as seen in the Disenchantment episode, King Zøg considers hiding Ursula’s bearskin for his own selfish motives before giving in to his own heart and letting her return to the forest.

Who is Jeny Batten, the voice actress who plays Ursula the forest selkie on Disenchantment?

The Simpsons creator Matt Groening is no stranger to reusing voice talents on his animated projects and Disenchantment is no different. The voice actress who plays Ursula is Jeny Batten, who has frequently been heard throughout both seasons of the show. Most notably, she is a recurring character named Kissy the Elf, who has a bad habit of leading on Elfo and others.

She has voiced other roles in brief voice appearances such as Girl in Play, Bathing Beauty, and Maiden #1. Batten also serves as acting producer for Disenchantment and has helped write two episodes of the animated series.

Beyond the fantasy world of Matt Groening, she only has a few recognizable roles on her resume. The biggest one of these roles is an appearance on the sitcom Rules of Engagement, which starred David Spade and Patrick Warburton.

That said, Groening seems to be giving Batten more room to showcase her talent in impactful roles in the series. Here’s hoping we hear more of her amazing voice work in the future seasons of Disenchantment.