Today was a dueling tale of two Presidencies with the incoming and outgoing Chief Executives setting the tone for their administrations and one pardoned turkey.

“Together, these public servants will restore America globally, its global leadership and its moral leadership,” President-elect Joe Biden said Tuesday as he officially introduced his primary foreign policy team with Vice President-elect Kamala Harris by his side. “It’s a team that will keep our country and our people safe and secure. And it’s a team that reflects the fact that America is back”.

“I have always believed in the nobility of public service and these Americans embody it,” stated Harris in a speech of her own. “I can say with confidence, that they are, to a person, the right women and men for these critical positions.”

On the other hand, besides a brief statement earlier today on the Stock Market shattering records in reaction to the Biden transition officially starting, Donald Trump spent his morning meekly bantering over what turkey to pardon for what will be his final Thanksgiving as President. On a day that sees the coronavirus pandemic raging across the nation this holiday with greater than even ferocity, the traditional light-hearted ceremonial turkey event seemed even more surreal than usual. 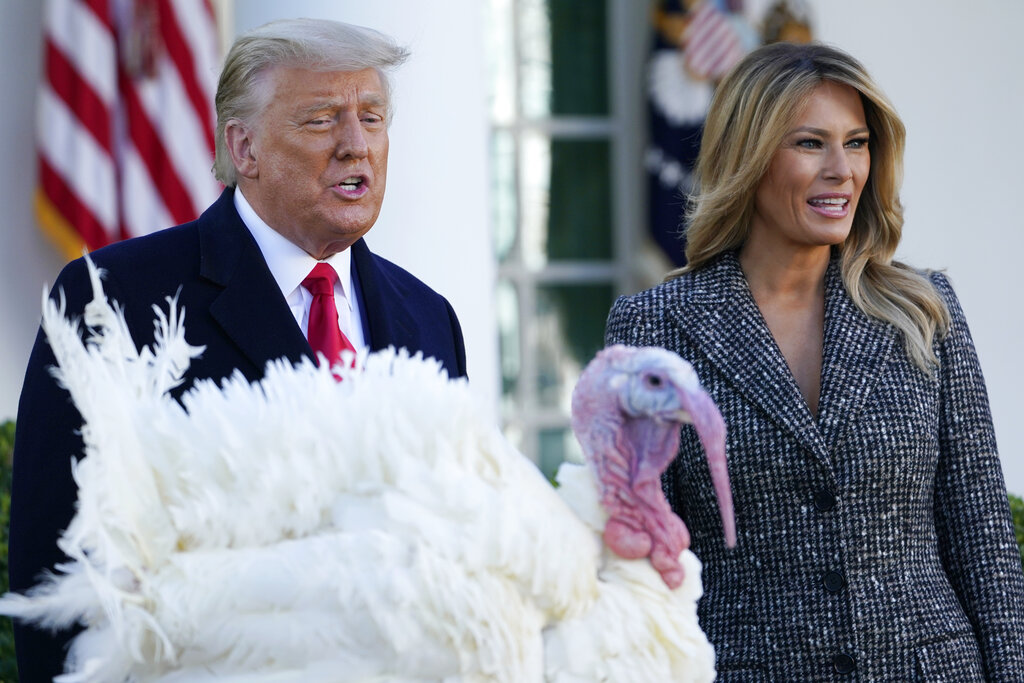 “That is a lucky bird”, an unmasked Trump said in granting “Corn” the turkey a reprieve this holiday. Wishing everyone a Happy Thanksgiving from the Rose Garden, the lame duck was gone in a matter of seconds with barely a word on the COVID-19 crisis except to call it the China virus, thank healthcare workers and blurt out “thanks for the vaccines.”

As a reporter yelled out “will you be issuing a pardon for yourself?” Trump also didn’t say anything on whether or not he would formally concede to Biden – even though reality has clearly kicked in.

In a rare move acquiescing to the reality of the coronavirus, the Trumps will be staying at the White House this Thanksgiving. CNN, MSNBC and Fox News all covered the turkey pardon, which you would have missed if you took a sec to check your mail on your phone.

Meanwhile previously in Wilmington, Delaware, in remarks that were carried live on MSNBC, FNC, CNN as well as ABC and NBC, Biden took more than a few swipes at Trump’s concluding reign of error this morning. As has been the case frequently since the former Vice President was declared the winner of the 2020 election on November 7, Biden took no questions from the socially distanced media assemble – but he sure tweeted a summation of the carefully crafted event.

Making no direct reference to the former Celebrity Apprentice host, the President-elect also did spoke of the official sign-off yesterday of General Services Administrator Emily Murphy on the transition – three weeks after the actual election.

“I am pleased to have received ascertainment from GSA, to carry out a smooth and peaceful transition of power so our team can prepare to meet the challenges at hand, to control the pandemic, build back better, and protect the safety and security of the American people,” Biden said in his just over 12-minute remarks. “And to the United States Senate, I hope these outstanding nominees receive a prompt hearing, and that we can work across the aisle in good faith — move forward as a country.”

Whether that Senate will remain under GOP control or have a tie-breaking new regime in the Democrats, will depend on the results of the two runoff races in Georgia on January 5.

In that vein, a day after their names were unveiled by the now official transition, the 46th POTUS-to-be brought out onstage a group that have both served with him for years and in the administration of Barack Obama.

Biden’s former National Security Advisor from his VP days, Tony Blinken has been nominated as Secretary of State and, in a literally and figurative rebuke of Trump’s policies, Alejandro Mayorkas will be the first Latino and the first immigrant to lead the Department of Homeland Security. “After years of chaos, dysfunction, and absolute cruelty at DHS, I am proud to nominate an experienced leader who has been hailed by both Democrats and Republicans,” Biden noted of Mayorkas.

Former CIA Deputy Director Avril Haines has been put forth as the next Director of National Intelligence, the first woman in that position. Foreign Service veteran Ambassador Linda Thomas-Greenfield will take America’s set at the U.N. and Jake Sullivan, another former VP Biden National Security Advisor, will lead the National Security Council under President Biden. Calling him one of his “best friends,” Biden has appointed former Secretary of State and 2004 Presidential candidate John Kerry to the newly created cabinet level position of Special Presidential Envoy for Climate.

“President Joe Biden will trust in God and he will also trust in science to guide our work on Earth to protect God’s creation,” Catholic Kerry said of his old pal and new boss, in another dig at Trump..

Neither Biden nor Harris made any mention of Janet Yellen on Tuesday.

Wanting the message of the day to be foreign policy and national security, the reported news that the ex-Federal Reserve Chair had been tapped to be the next Treasury Secretary was to be for another news cycle – perhaps before Thanksgiving, or not.