Kenya Moore Spills on 'RHOA': From Her Separation to 'Stripper-gate'

“This is what I don’t like about my position on the show,” the Real Housewives of Atlanta star confesses to ET over video chat from her home in Georgia. “If I’m an honest voice, and I call people out, then somehow I’m a villain. But if it were me and I got caught, shtupping the stripper, you know, that came to the bachelorette party, I would have been dragged from here to California, you know what I mean?”

Kenya is referencing some much-hyped drama set to play out on season 13 of the Bravo hit. Cynthia Bailey’s bachelorette getaway reportedly devolved into a sex party, with cast mates allegedly hooking up with a stripper the women hired to entertain the bride-to-be. Most of the cast (and even the stripper) has denied anything salacious went down, but Kenya declares, “I heard a lot — and other people heard a lot, very specific things. Very specific things and very specific voices.”

“I don’t think that it’s fair that people will call that pot-stirring,” she says, referencing her asking questions about what she thinks she heard. “We are a cast, and we are in a cast house, and if something happens like that in a cast house while you are working, then it should be discussed. You can’t do that at McDonald’s! You can’t go in the bathroom at McDonald’s and have sex with someone and think it’s OK because hey, you know, you were in the closet. No. You’re at work.”

Kenya calls this fresh batch of RHOA episodes “juicy” in every sense of the word, joking that her co-stars brought major “WAP” energy to the show this year. It’s a year full of change for the cast, between navigating the coronavirus pandemic and the call for racial justice, to the exits of cast members NeNe Leakes and Eva Marcille. The change in dynamics brought some unexpected friendships Kenya’s way, including with one-time foe, Marlo Hampton.

“I think that I am always — and have always — been a very forgiving person,” Kenya says of reconciling with Marlo, “but you have to work to get that forgiveness, meaning apologize and then, changed behavior. That’s all I’ve ever really asked of someone who is sincere, and we had a moment where we had a very sincere and honest conversation after, obviously, dueling it out all [last] season and, you know, I have to say, it’s very — It’s one of the highlights of the entire season.”

Fans shouldn’t hold their breath for similar growth between Kenya and Porsha Williams, though. The on-and-off frenemies are very much off in season 13, and Kenya says the ball is in Porsha’s court.

“For three years, I considered her friend,” Kenya notes. “I was very supportive. I remember going to her baby shower, reaching out to her — even when she had her spin-off, I was tweeting about it. I was sharing her joy with her and I actually had love for her. So, for her to turn on me when NeNe came back — I think the fans and everyone saw that.”

“[The] things that she’s doing to me, especially this season, is just, it’s just really disgusting,” she adds. “When people don’t want to be friends with you because they feel threatened, or they feel a certain way that they don’t want you to be bigger than them… I think that is really what comes into play, and that’s a page out of NeNe’s book, honestly — and she’s been taking a lot of pages out of Nene’s book lately, and not in a good way.”

“The attitude, the showing up three hours late to the set, the demanding of certain things happen [and] footage being taken out because she doesn’t like the way that she looks,” Kenya rattles off, “you know, that’s kind of NeNe behavior. So, unfortunately, yeah, we have a little NeNe, Jr. on our set.” 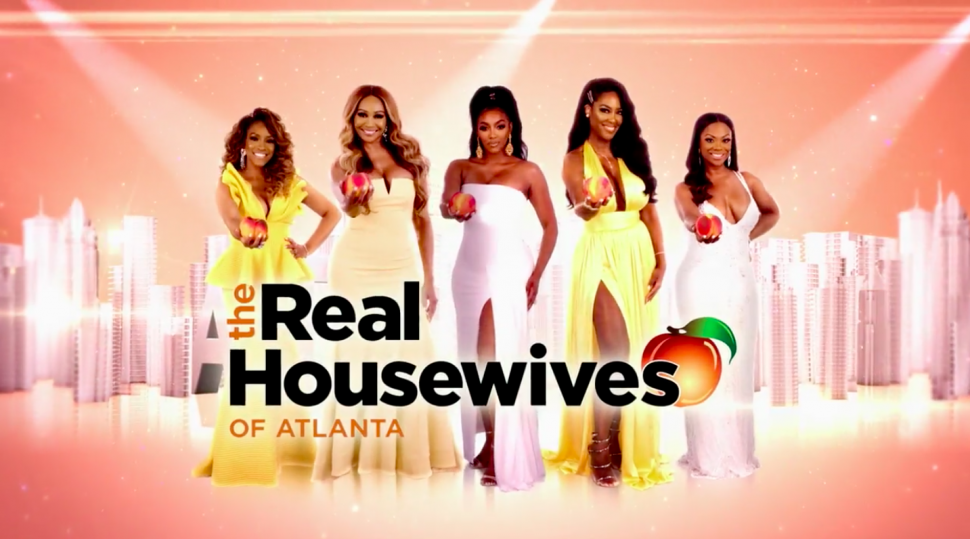 “LaToya is amazing,” Kenya gushes. “She’s refreshing. She’s a little spitfire. She’s sexy. She’s just energetic. She has a unique energy, and I absolutely adore what she brings to the show. We also had another friend of the show, Falynn [Guobadia], who is an absolutely stunning, fabulous wife. Very wealthy. Her husband adores her. I really hope to see more of her. If not this season, next season for sure she should be holding a peach.”

Kenya skirts around saying anything about Drew, which suggests she doesn’t exactly get along with the actress-turned-reality star. What Kenya will offer is that Drew reminds her of season 8 Housewife Kim Fields, the former child actress who only lasted one season on the show.

“I loved Kim Fields — even though I didn’t treat her like I loved her — I loved her as the icon that she is, but on the show, being the actress, I believe that it just wasn’t genuine,” she shares. “Like, she wasn’t telling her authentic story, and … I kind of get the same vibe from Drew.”

Kenya qualifies that statement by saying that Drew is “a little more thirsty than Kim.”

“Kim wasn’t thirsty,” she continues. “You know, Drew is just parched, honey. She is doing everything she can.”

On the flipside of the group dynamics is Kenya’s home life, which was already complicated before the added pressures of lockdown came into play. She and her husband of three years, Marc Daly, separated in late 2019, the aftermath of which plays out in season 13.

“It’s not going to be easy for me,” she admits of watching the downfall of her marriage play out on TV. “It’s never easy for me when you are vulnerable and you put yourself out there. But I’m not only putting myself out there, I’m putting my husband, my daughter and my family, because all of those emotions and instances are sort of intertwined.”

Kenya and Marc’s relationship is complicated at this time, to say the least. He’s spent most of quaran-times in New York, while she’s been living in Atlanta with the couple’s 2-year-old daughter, Brooklyn. The three recently came together for Brooklyn’s birthday, Kenya sharing happy family photos on Instagram.

“We’re still separated, and I have gone through the gamut of emotions from being happy, and happy to move on and to see what my life is going to be like in the next chapter, and then I go from that to being kind of sad,” she confesses. “Looking at Brooklyn, looking and gazing into her father’s eyes and seeing the love and knowing what an amazing family we had — and could we still have it. So, for me, the best way to describe it is that I feel turmoil a lot through the season, because I’m being pulled in different directions and just until recently things really shifted, as you saw from the birthday party.”

“I say shifted in a different way, because I don’t know where my heart really is right now,” she admits. “For me, that’s not like me. I’m a girl who always knows what I want and to be placed in a position where it’s, like, you had moved on and to now think that maybe, am I doing the right thing? Should I allow this person to have another chance? Not just for the sake of a child, because I don’t think you should stay together for the sake of a child, but … the sanctity of marriage is important to me, and those vows are important to me.”

On RHOA’s season premiere last week, co-stars Cynthia Bailey and Kandi Burruss questioned why Kenya would want to stay with a man who seemingly doesn’t make her happy. Since then, though, she says she’s seen some growth from Marc.

“I didn’t feel like he was fighting for me, and I had been resolved to just say, you know what? I’m not going to make myself miserable if someone doesn’t want me, because I am the prize and if they don’t recognize that, it’s just time for me to move on and maybe on to something new, different or even better,” she says.

Last season, the women observed that Kenya had an alter-ego when around Marc, “Ken,” a more reserved and soft-spoken individual who was submissive to her husband. Today, Kenya says Ken no longer exists.

“I am in a very different place in my life,” she promises. “I will not bow down to a man. I will not beg for love and attention and those things kind of come from, as I’ve learned through the season and we reveal, things that happened to me when I was a child, in my childhood and what I needed and what I didn’t get and how that manifests itself in my relationships. So, it’s a really interesting journey if you follow along.”

Kenya describes the last year as a self-love journey. In September, she revealed her exact weight to her Instagram followers, 183 pounds, a number 30 pounds higher than what she’s used to seeing on the scale.

“We all have been through it,” Kenya says of quarantine stress. “It doesn’t mean that I don’t feel that I am incapable of being the bright spirit that I am in the beautiful person I am on the inside, but we all have our ideal weight and we say, ‘Oh my gosh! 10 pounds?!’ Then 20, then 25, then 30 and you’re like, you feel a mess. I literally am 30 pounds heavier than three weeks after I had my child. That is a lot of weight. So, I think sharing can help people. That’s just what I think. It’s nothing to be ashamed of, because you can lose it, you know? And I think by sharing it just helps people that might be in the same situation as you.”

“Once you confirm that, then I think that it’s a possibility that Hollywood might go, you know what? She can’t play the hot girl anymore. She can’t play this part anymore,” she says. “So, that would be my only real concern.”

“Where I am spiritually, emotionally, I am loving turning that number next year,” she adds. “I feel like I can conquer the world — there is nothing that I cannot do — and if that means turning 50 … then, please, can I turn 50 tomorrow?”

The Real Housewives of Atlanta airs Sundays at 8 p.m. ET/PT on Bravo.