Kim Kardashian didn’t let anyone escape her jokes as she made her hosting debut on Saturday Night Live, taking aim at her sisters, estranged husband Kanye West and OJ Simpson.

The 40-year-old took to the SNL stage in style, donning a pink body-suit as she began her opening monologue.

She used the opportunity to mock her divorce from rapper Kanye, as well as her sisters’ plastic surgery rumours and even targeted Caitlyn Jenner’s bid to be a politician.

‘I’m excited to be here tonight to show you guys that I’m so much more than just a pretty face… and good hair and great makeup and amazing boobs and a perfect butt,’ she began.

‘Basically, I’m just so much more than that reference photo my sisters showed their plastic surgeons.’

The reality star then roasted her mum’s boyfriend Corey Gamble, suggesting that he is a ‘gold digger’ before turning her attention to her own love life, quipping: ‘I’ve been very blessed in this life, and I’m grateful for everything. All the ups, all the downs. I married the best rapper of all time. 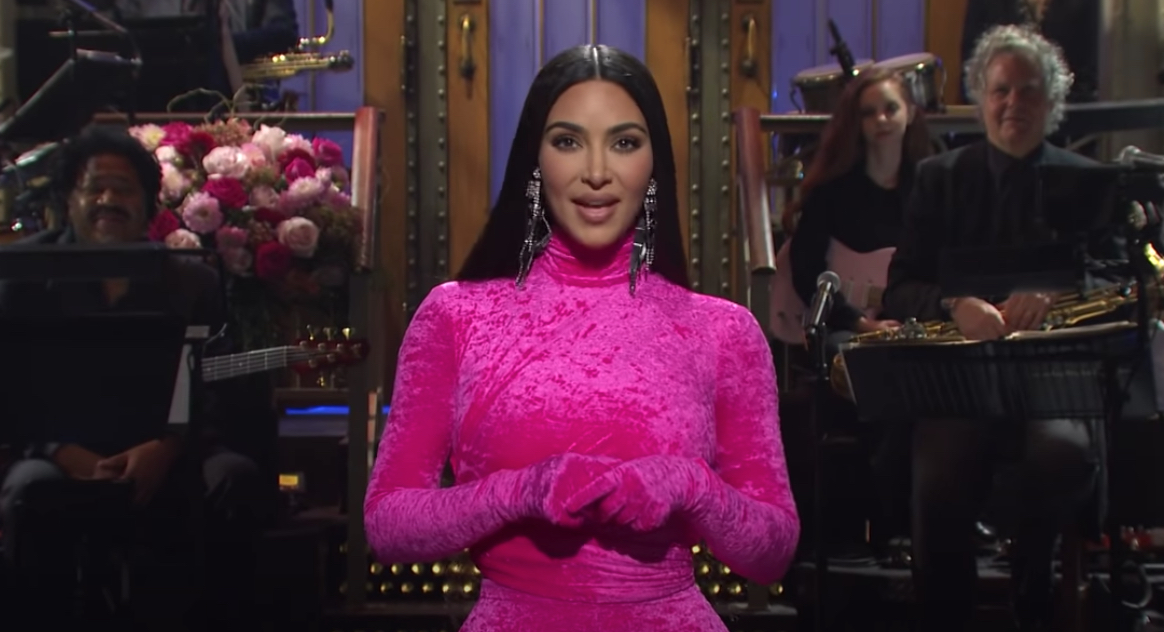 ‘Not only that, he’s also the richest Black man in America. A talented legit genius who gave me four incredible kids. So when I divorced him, you have to know it came down to just one thing… his personality.’

Kim also made reference to following in her father’s footsteps with her law career, before discussing his close bond with OJ Simpson, who she recalled was the ‘first Black person I ever met’.

Referring to the former athlete’s murder trial, when he was accused of murdering Nicole Brown Simpson, she continued: ‘My father was – and still is – such an inspiration to me and I credit him with really opening up my eyes to racial injustice.

‘It’s because of him that I met my first Black person. Want to take a stab in the dark at who it was? I know it’s sort of weird to remember the first Black person you met but OJ does leave a mark. Or several. Or none at all! I still don’t know…’

Kim turned the attention to herself by alluding to her sex tape with Ray J, before suggesting for a second that she would be running for President of the United States in the next election.

‘I know we’re divided as a country but I’d love America to come together, which is why I’m here to announce that I’m running for…. I’m just kidding, guys,’ she added.

‘I’m not running for President, we can’t have three failed politicians in one family.’

Kim became the first member of the Kardashian family to host the iconic show, with the announcement of her role dividing some fans.

However, she was reportedly helped behind the scenes by Kanye, who has previously helmed the show.

Insiders claimed that the All Of The Lights musician has guided her on ‘her performance, her opening monologue, even her costumes for the show’.

Well, it was definitely a doozy.

The former couple announced their divorce earlier this year, after six years of marriage – but are thought to have remained close for the sake of their four children, North, Saint, Chicago and Psalm.