The Keeping Up With The Kardashians star, 42, showed off her glamourous look ina series of mirror snaps. 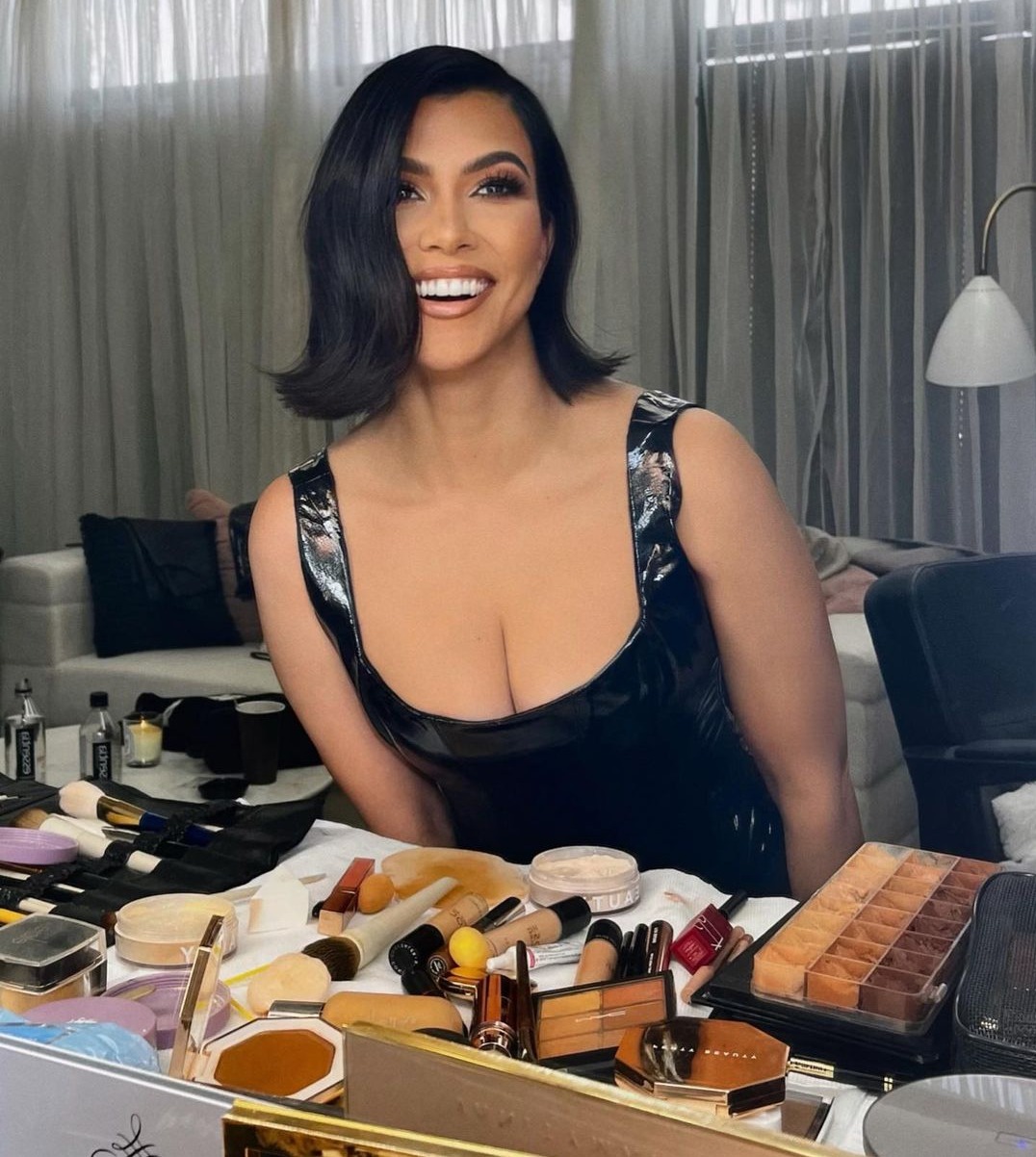 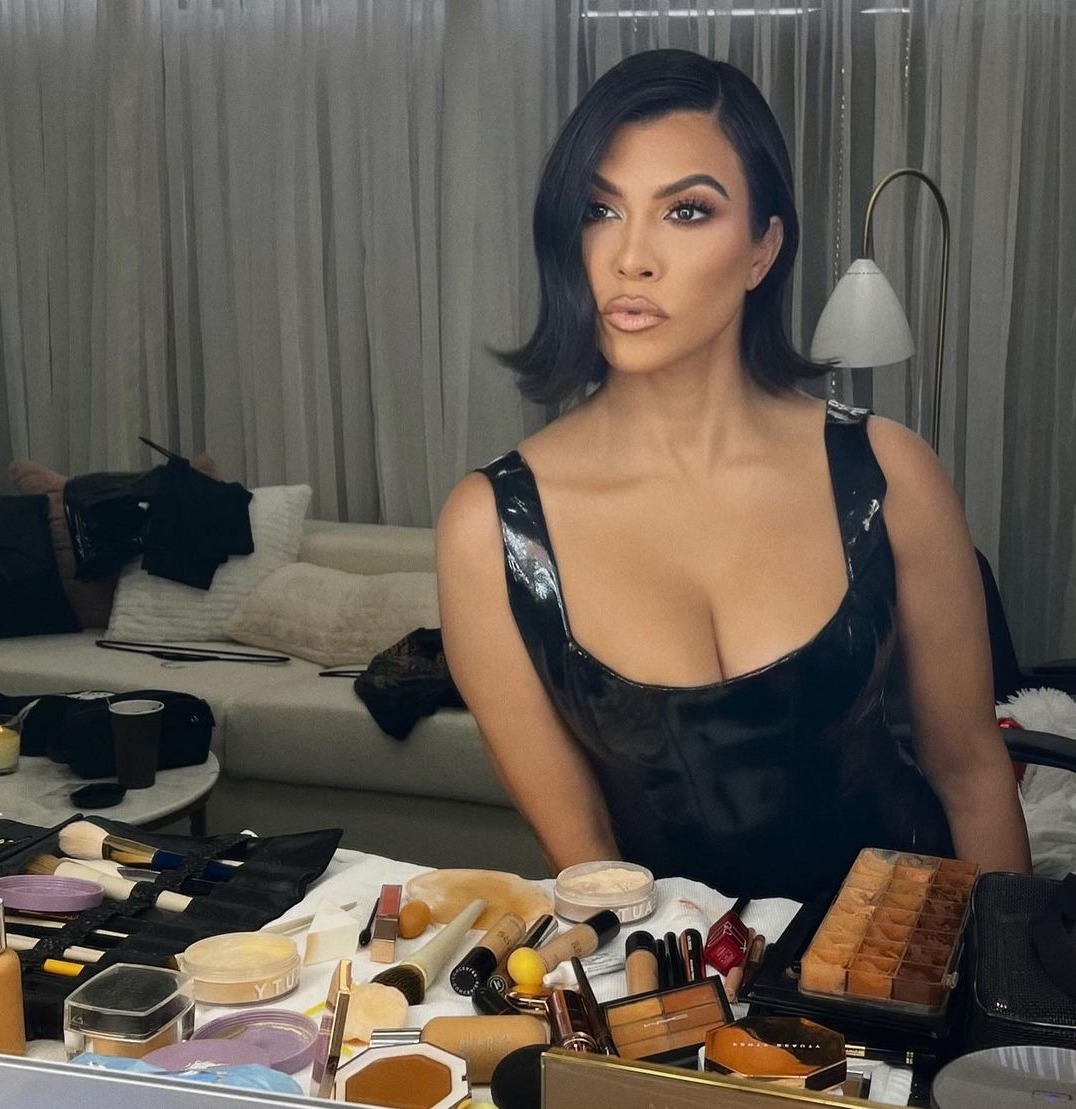 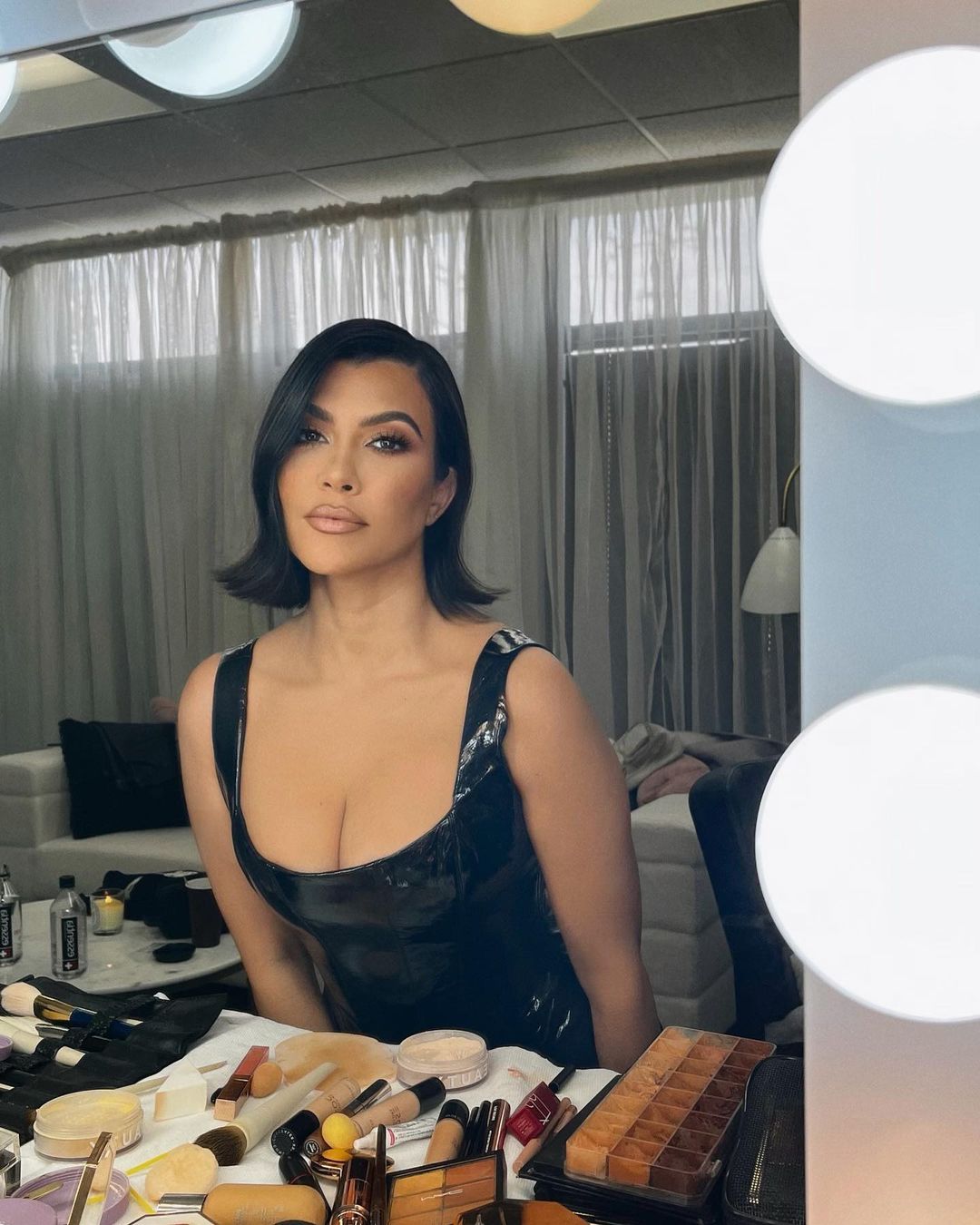 The mom-of-three, who got engaged to Blink-182 drummer Travis Barker last weekend after eight months of dating, flashed a big smile in a candid photo.

In another image, she gave fans a demonstration on how to nail the perfect pout.

Showing off her trim physique in the PVC ensemble, Kourtney posed up a storm in the racy number.

Looking chic with her jet black wavy bob, the model opted for heavy eye makeup, bronzer and a caramel lipstick.

It comes after Kourtney shared a picture of engraved handcuffs to her Instagram story after repeated bragging about kinky sex with her fiancé Travis.

The newly engaged star took to Instagram to hint at her wild personal life.

In the snap, a pair of handcuffs were resting on white bed sheets.

There were engravings in French on the handcuffs in a small typewriter font.

Another read "printemps été 2022" and a third "riches enfants déprimés."

She shared the exciting news on The Ellen DeGeneres Show earlier this week after cameras rolled on Kourtney and Travis Barker's engagement.

Khloe told Ellen the new show is expected to debut on the streaming network at the end of January or early in February.

She shared: "That's the beauty of Hulu. We're streaming, and we get to have a much quicker turnaround than previously. And we're really excited.

"They're here now in the back shooting with us, and we're so happy to be up and rolling again."

Last week, Kourtney posted a plethora of new pics to her Instagram account from the moments before and after she said yes – with some fans believing she's pregnant.

She captioned the post: "I woke up all night thinking it was a dream."

The never-before-seen photos are a collection of Travis, 45, and his bride-to-be cuddling, holding hands on the beach, and sharing smiles.

Kylie shared a heart emoji, while the Blink-182 drummer left his own special message: "Forever with you is a dream come true."

Meanwhile, fans continue to speculate that there may be a bigger reason behind the sudden engagement.

🔵 Read our Kardashian live blog for the latest updates

While a source recently claimed Kourtney is ready to have a baby with her new fiance, many followers believe it's mission accomplished.

Some have called out various hints Kourtney may be pregnant, as they've noticed the TV personality has been wearing loose clothes, given up eating meat and fish, and stopped drinking alcohol.

Kourtney also happened to add fuel to the rumors when she and Megan Fox, 35, referred to their boyfriends, Travis and Machine Gun Kelly, 32, as their “future baby daddies" while attending the MTV Video Music Awards.

Kourtney is no stranger to being a mom as she shares sons Mason, 11, and Reign, six, and daughter Penelope, nine, with her ex Scott Disick.

As for Travis, he shares kids Alabama, 15, and Landon, 17, with his ex-wife Shanna Moakler.

A family friend told People: "Kourtney is of course ecstatic. She can't wait to marry Travis. She would also love to have a baby with him." 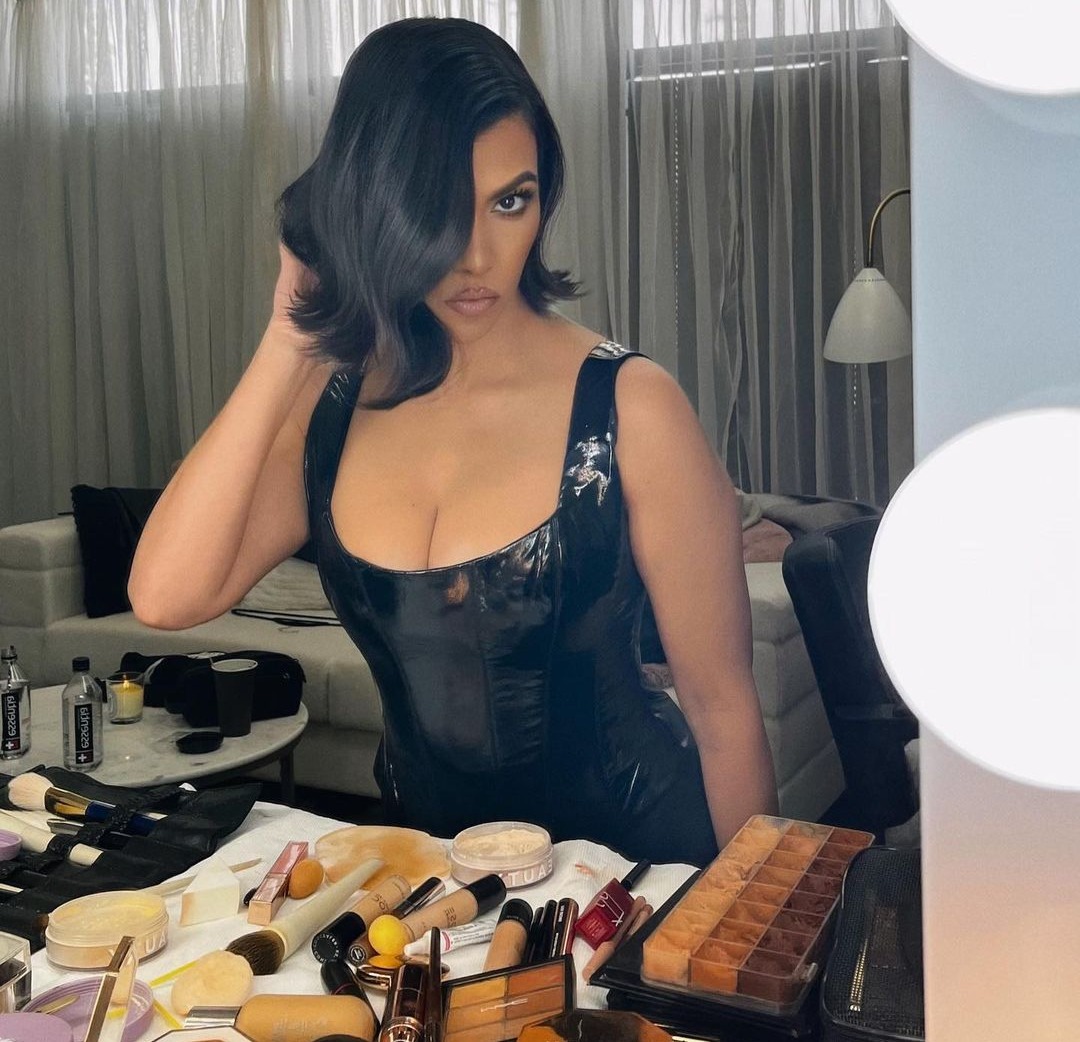 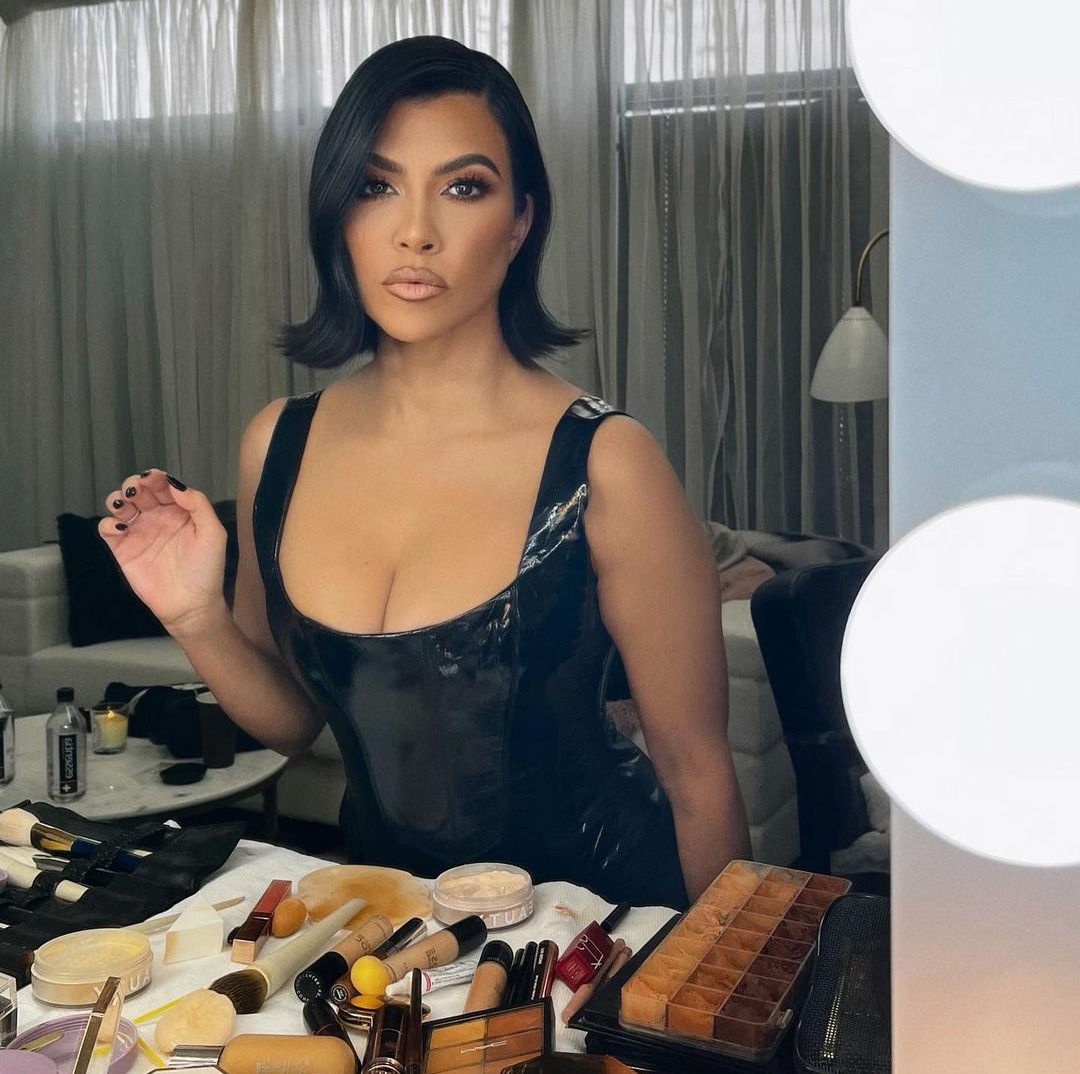 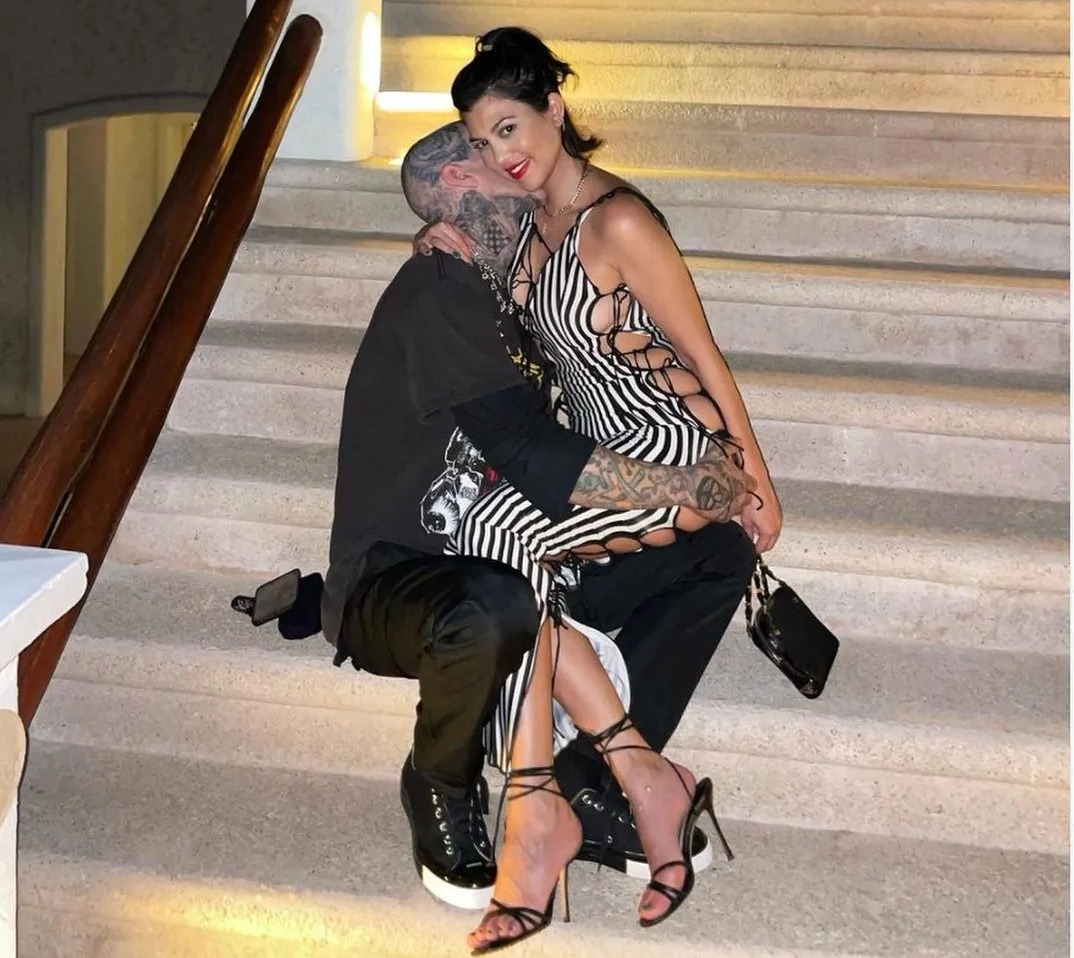