Loved up Coronation Street superfans get engaged outside the Rovers 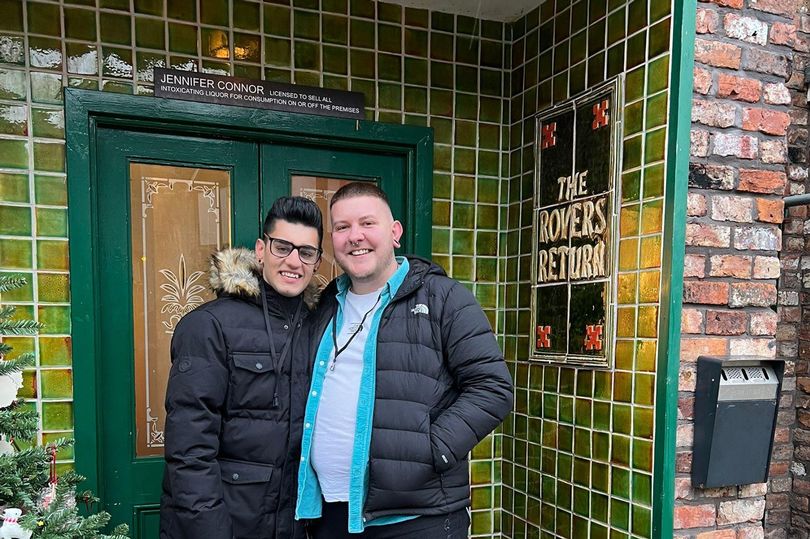 Proposals are a common occurrence on Coronation Street, but they’re usually between the characters who live there.

However, two loved up superfans recently got engaged when they visited the cobbles.

29-year-old Adam Lantham from Northwich popped the question to his partner, Bailey Lister, 19, outside the Rovers Return.

The proposal was aided by staff of the Coronation Street Tour, who took photos and video of the occasion.

The pair, who live together in Blackpool, are avid superfans of the ITV soap, with Adam admitting that he has not missed an episode in years.

Speaking to Manchester Evening News, he explained that his original plan to propose up the Blackpool Tower didn’t seem romantic enough.

‘I was a kid when I first started watching Corrie and I’ve not missed an episode for years. Even if we are not in, it’s always recorded on Sky.

‘It took about two-and-a-half months of planning, getting the rings and trying to keep it a secret.

‘It was a hard lie to tell but thankfully he said yes. It was definitely a relief because the nerves had kicked in by then.’

According to Adam, it was an easy decision to propose outside the Rovers.

‘There have been some famous proposals in there so I thought it was the best place on the set to do it.

‘It was nice to be there and see it in person. We just had loads of fun and we were so looked after and welcomed.’

During the tour, the pair were also able to meet Jack James Ryan, who plays Jacob Hay in the soap.