The BBC Breakfast pair were discussing the articles in today’s newspapers that may have caught their eye prior to going on air. While Naga went for the spine-tingling news that a previously-thought extinct spider had been rediscovered, Charlie opted to share with BBC viewers the latest fashion trends. But when he himself chimed in with his own thoughts on fashion, proceeding took a turn.

“You know that I keep a very sharp eye on fashion trends, it’s very much my thing,” Charlie sarcastically began his BBC Breakfast report.

“And a lot of people will be interested in this one. Here’s the thing going into the next season, Autumn/Winter?”

Naga then corrected Charlie, making I clear the next fashion season would be Spring/Summer.

Charlie continued: “Spring next year, if you’re thinking about it already, go – I think it’s gentlemen as well, I don’t know – blazers and a baseball cap. 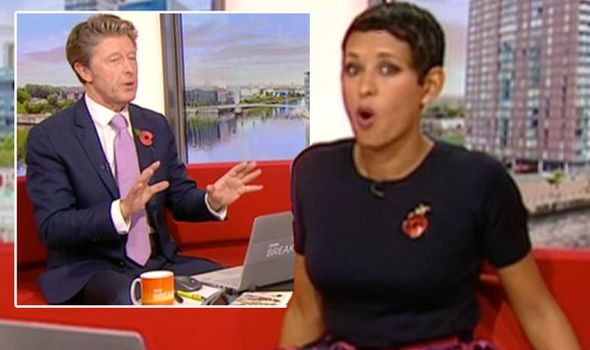 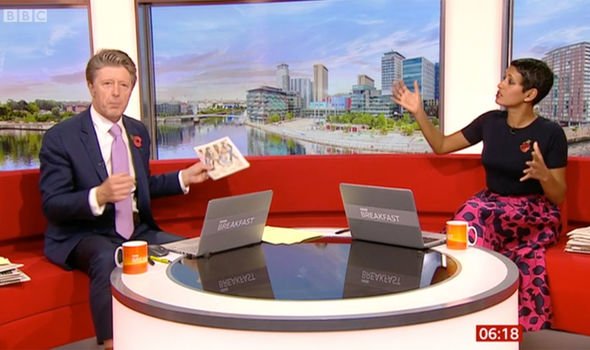 “Baseball cap and blazers, that’s the thing to go for.

“By all accounts, one of the outfits here, it’s called ‘Ladies Who Lunch’,” Charlie continued as held the newspaper article aloft.

“A yellow lemon Boucle jacket with gold buttons paired with distressed blue jeans and then the baseball cap on top that’s the thing.”

By this point, something off-camera had caught Naga’s eye as she began to scan the studio. 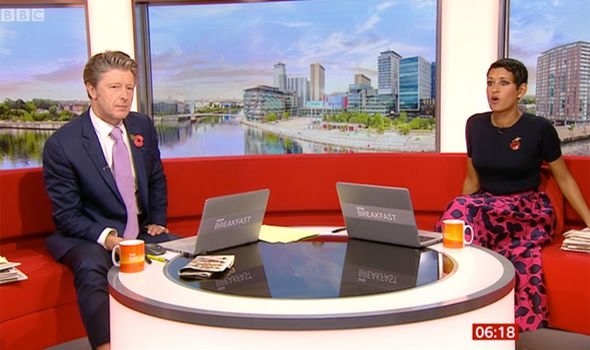 And keen to let viewers know what she was looking at, the BBC Breakfast host cut into Charlie’s newspaper analysis bringing it to a temporary halt.

“Can I just say, right,” Naga interjected. “Our cameraman and our floor manager are literally crying with laughter at you describing this,

“And you thinking this is what we should discuss this morning,” she added, beginning to laugh herself.

Charlie defended his choice of newspaper report, saying: “I’m just putting it out there.”

Naga then put forward the debate on how old one should be to wear a baseball cap, something her BBC Breakfast co-host had a firm stance on.

“I know age should have no factor in what fashion you go for,” Charlie began. “But there’s a certain when a baseball cap…mmmm.

“Do you know what I mean? I just do think that,” Charlie reiterated to a stunned Naga.

Charlie refused to put a specific age out there to back up his claims as Naga chimed: “Loads of people love wearing them.”

“Good,” Charlie said. “And they’ll be bang on fashion, pop a blazer on.

“Lemon yellow, very good. 19 minutes past six,” he concluded, swiftly trying not to cause more debate.

Naga clearly saw the funny side of Charlie’s thoughts as she let out a smile before cutting to the film review.

BBC Breakfast continues daily at 6am on BBC One.