If you thought Monet Tejada’s concern forZeke always seemed a little intense for an aunt-nephew relationship, well, now you know why.

In Sunday’s episode of Power Book II: Ghost, we learned that Monet (played by Mary J. Blige) is really Zeke’s mother. And his father is Dante, aka Mecca, aka Monet’s former love (played by Daniel Sunjata) who first showed up in the Season 2 premiere.

It appears that Monet never told Dante about the pregnancy, though he figured it out and has been paying Zeke’s legal bills ever since Davis MacLean agreed to represent the NBA hopeful. And for what it’s worth, Dante didn’t seem angry about being left out of the loop for such a long time. 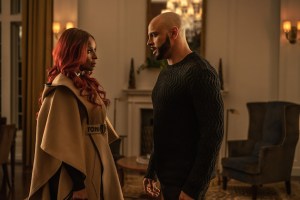 “We need to fight for Zeke now,” he told Monet near the end of the episode. “Let me do that, by your side. We’ll save our son together.”

Monet looked conflicted — but that didn’t stop her from kissing Dante when he leaned in, did it?

At the season’s start, showrunner Courtney Kemp described Monet and Dante’s history this way: “Let’s just say they had a relationship when they were teenagers, and he went off and now has become an international man of mystery, and has come back into her life at a really inopportune moment… it’s never a good time!”

Were you surprised to find out that Dante/Mecca is Zeke’s dad? Did you think maybe he was Cane’s, instead? Hit the comments and let us now all of your thoughts!