Jen Shah earned her Housewives merit badges in The Real Housewives of Salt Lake City’s debut season: She broke a glass, got involved in an unexpected feud (about “hospital smell,” of all things), introduced catchphrases and, maybe most importantly, survived her first reunion.

“My gosh, I’m making a Shah Squad reunion badge, because we need something to commemorate that day,” Jen half-jokes to ET over video chat, just days after returning home to Utah from New York City, where the RHOSLC cast shot their reunion sit-down with Housewives head honcho Andy Cohen.

“My first reunion was… it was very long, OK?” she cracks, with a laugh. “Owning multiple businesses for years, you go through depositions, hearings, that’s just a natural thing as a business owner. The reunion — I’m here to tell everybody — the reunion was worse than, like, a nine-hour deposition.”

Jen admits she expected the reunion to be “easy-peasy” for herself, thinking she’d laid everything out on the line during the season. She says she was wrong.

“Yeah, that really doesn’t matter and they still rehash everything at the reunion,” she notes. “I think everyone got the hot seat for a bit, ya know? In true reunion style. … It was interesting, all being there and seeing Mary [Cosby] and Meredith [Marks] and Whitney [Rose] and, just everybody, you know, everyone in one place. Like, no one can run and hide from anything.”

Jen says some unexpected allegations of “backstabbing” come to light at the reunion, among other things.

“There’s definitely some curveballs and some things that even I was surprised about at the reunion,” she adds. “If you thought season 1 was unexpected and explosive? You guys, wait for the reunion.”

Fans are eager to see what goes down between Jen and Mary at the reunion, as it’s been weeks of episodes since the two have been in the same room. The season started with the pair falling out (over that whole “hospital smell” thing), half making nice, only to fall out again. Then, Bravo released the first images of the women at the reunion, and Jen and Mary were side by side in the all-cast photo. 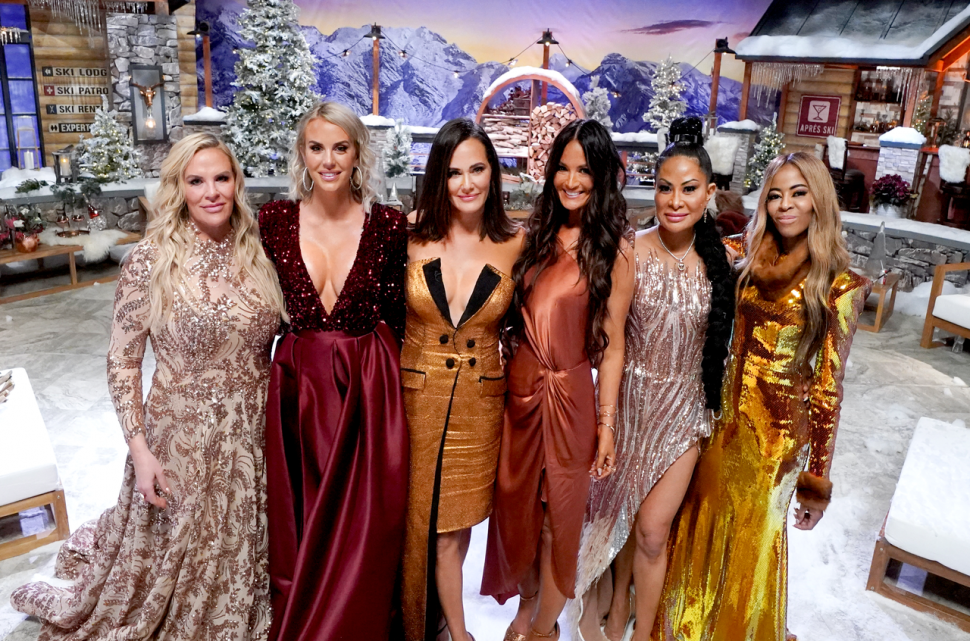 One of Jen’s major issues with Mary has been that she doesn’t always own what she said… or remember what she said. There’s also the whole ordeal of Mary claiming that co-stars Meredith Marks and Lisa Barlow are afraid of Jen, which both women denied to Jen after Whitney played messenger and revealed the apparent lie to the group.

“There are some answers at the reunions,” Jen offers, before divulging whether it’s true or not. For what it’s worth, co-star Heather Gay told ET last week that she believes there’s some truth to it.

“I think the truth is always somewhere in between,” Heather said. “I think you would have to be some sort of masochist to not live afraid of Jen’s reactions. It’s not a character flaw to be terrified.”

Those reactions — from the glass throw to multiple dramatic exits, water splashing and more — have led some viewers to call Jen’s authenticity into question. Is she really this dramatic, or is she playing things up for the cameras?

“What you’re seeing on TV, that is 100 percent Jen Shah,” the mom of two promises. “It’s really funny because the people that know me, it doesn’t faze them. You see my husband and my kids are not fazed. This is just how I’ve always been — and the other thing people will bring up, I’ve seen online where people will say, ‘Oh my gosh, she acts so much different around her husband!’ No, I don’t act differently around my husband.”

Jen hopes the audience understands they’re seeing bits and pieces of her, and of course the explosive moments are what stand out on TV. She’s not running that hot all day, every day.

“I’m a businesswoman,” she notes. “Obviously you [aren’t] successful for 20 years, or build an empire, throwing glasses and being just crazy.” 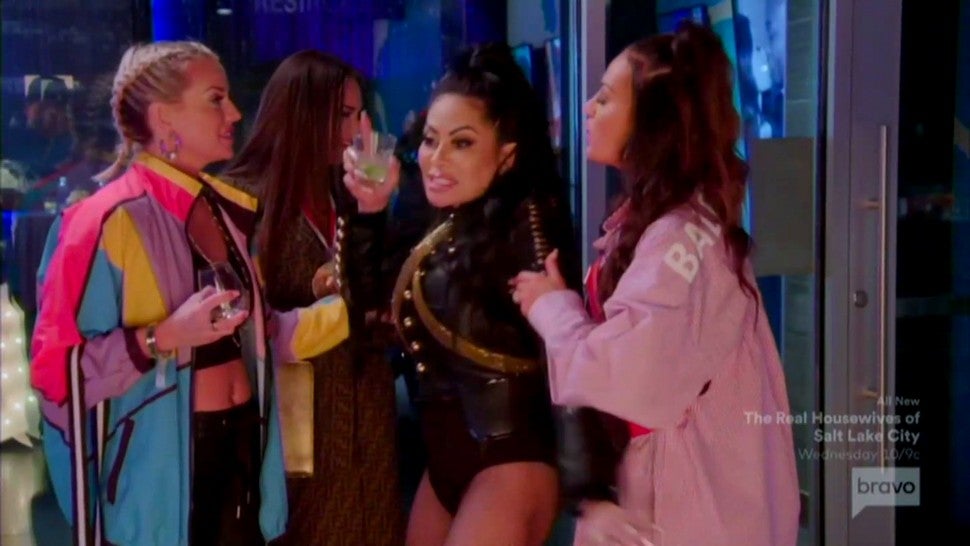 Jen’s quick to point out that every time she’s gone off, it’s been over a touchy subject, namely her family. The 47-year-old says she has and will continue to own everything and anything about her life. She admits that the “Shah Chalet,” her home on the show, was just a rental for the ski/filming season (“That’s very common in Utah,” she offers of the ski-half of that season equation), and promises that her digital marketing company staff does more than just plan her personal parties (she also promises that her employees have titles beyond “assistant,” even though that’s the only one seen on the show).

Jen’s career recently faced some online scrutiny, after reports surfaced that she was once involved with Trump University, a real estate training program founded by Donald Trump that has been dubbed a “massive scam,” facing allegations of fraud and a couple of class-action lawsuits. The Real Housewives of Beverly Hills alum Dana Wilkey claimed to have uncovered Jen’s connection to Trump U on Instagram, citing an old LinkedIn account for the RHOSLC star that listed her work for a company called Prosper, which had loose ties to the program.

“I worked there for maybe seven, eight years, and then I left there and I went out on my own and started my own company,” she explains. “I left there in, I want to say 2010, 2011. In 2016, I guess, there was an article that they had done a curriculum workbook for Trump University or something, I don’t know if it was used. It was mentioned in articles, so then people saw my old LinkedIn from 2006 and were like, ‘Oh my gosh!’ and that’s how they put it together. They were like, Jen Shaw, Trump University and I’m like OK, the reason why I had that old LinkedIn, by the way, is because when I left the company, I had a three-year non-compete, so I just had to leave the link. I couldn’t touch anything or whatever. So that’s why it was there and then I forgot about it and I didn’t really care, so that’s why it was there, but it has since been deleted so nobody gets any weird ideas.”

Jen, an ardent Joe Biden supporter, hopes that clears things up for enquiring minds. She says she wishes some of her co-stars were just as upfront with their truths as she is hers.

“Like Meredith,” she’s quick to offer up. “I know she wasn’t being as authentic or real. She’s definitely trying to brand herself and her family in a specific way, which is fine, but Meredith is actually a lot of fun when the cameras were off, you know? Like, she can be very fun.”

For example, Jen says she was shocked to see a fun night in with Meredith and her kids, Brooks and Chloe, turned into drama. After Jen made some slightly raunchy jokes and allegedly flashed her private area while doing high kicks, Brooks asked Meredith to un-invite Jen from a sleepover the pair had planned for a day later, saying Jen and her vagina made him uncomfortable. Meredith promised there was “more to the story” on social media after viewers accused Brooks of making something out of nothing, but that “more” has yet to materialize.

“There is more to the story, but it only makes my point even more,” she then adds. “Vagina-gate” will be resolved at the reunion. 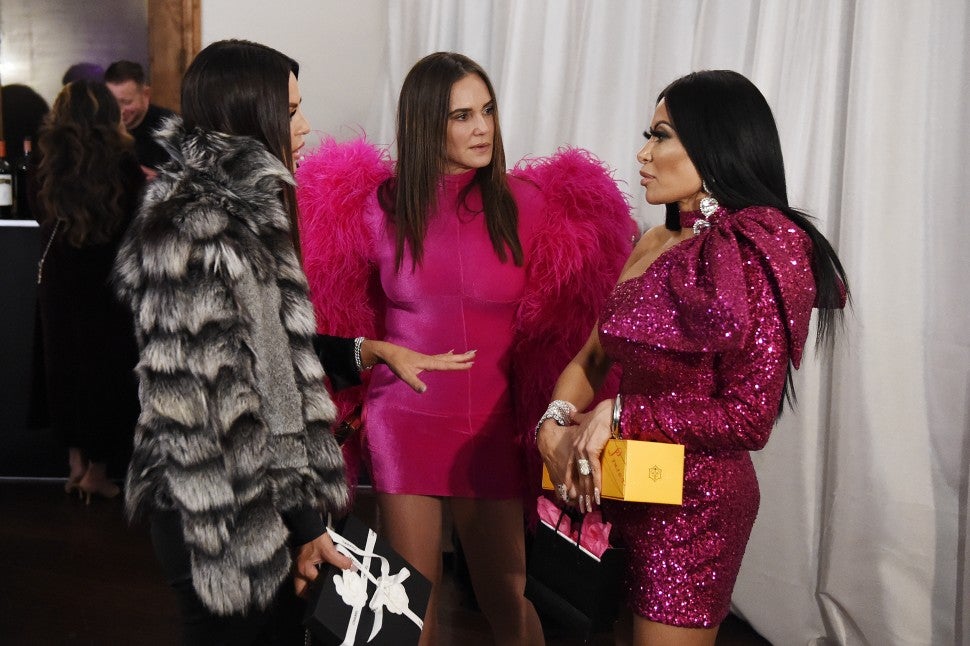 While Jen doesn’t regret that night with Meredith, she does regret getting involved in the rumor mill of Meredith’s marriage. Meredith and her husband, Seth, were semi-privately working through a separation (and later reconciliation), a fact Jen says she was privy to long before filming. She offhandedly made a comment about not understanding Meredith’s marital situation some six months before cameras went up on RHOSLC, and that information boomeranged back to haunt her.

“I care about her and her family,” Jen clarifies. “When you have a good friend — and at the time, I didn’t know Meredith that well, right? I just met [her] and I just happened to be somewhere where I was like, hey, this is kind of weird… I didn’t know her. My really good friend then calls me the next day: ‘Hey, how was it?’ It was great. I don’t know, there’s this one weird thing. This was mentioned months, months, months before filming. I didn’t even know if we were going to be filming … [and] that conversation then made its way into TV land, and the ladies were talking about it and then it gets blamed on me — which I do take the blame for. I shouldn’t have engaged at all in any conversation.”

Jen had that conversation about Meredith and Seth with Whitney, who described Jen as a “pot-stirrer” ahead of the season. But Jen says any pot-stirring she did was unintentional.

Jen says she ends the season on “the Jen Shah apology train,” making amends with her castmates from any wrongs she committed in their eyes.

“Regardless of whether or not I felt the need to apologize, or was not in the wrong, what I realized is, these ladies and my friends don’t have the same background or upbringing that I do,” Jen explains. “They don’t treat things the same. … I need to understand that and meet them halfway and see why you perhaps didn’t understand this, so I’ll do better. It’s like in a marriage, right? You need to figure out how things work. You know?”

Speaking of marriages, Jen says facing her own martial struggles on TV has “absolutely” strengthened her relationship with her husband of more than two decades, Sharrieff Shah. On the latest episode, she broke down in tears to Sharrieff, explaining all the pent-up resentment she was feeling toward him for more than a year. It all dated back to her own father’s death; Sharrieff was unable to help her with his end-of-life care and missed the funeral due to a work obligation. 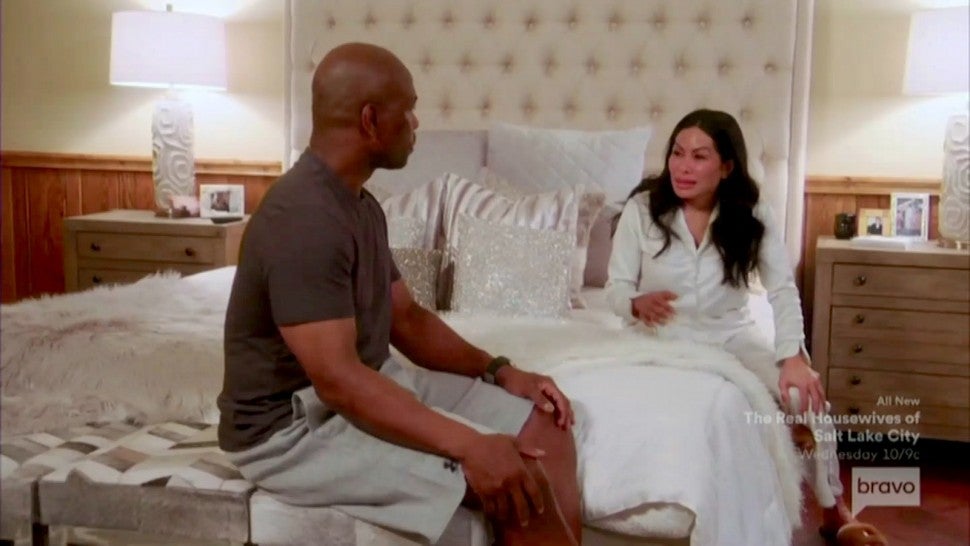 “I didn’t really know until he started talking to me, too, and was like, ‘I feel like you’re angry at me,'” she confesses. “I waited to tell him because I tried to be strong for a long time and just fix it on my own. … I held it in for almost a year, is he going to get mad that I didn’t tell him before? He’s very caring and understanding and he knew how difficult it was to process it.”

Jen says, through therapy, she’s learned some of her lash-out moments were a direct result of not processing the grief surrounding her dad’s death. She thanks the show for “forcing” her to face that grief and come out the other side of it.

“If you don’t process it, deal with it, you’re going to have a Jen Shah on your hands, splashing water and throwing glasses,” she notes.

With new learnings about herself, Jen is ready to take on a second season on Housewives. While Bravo has yet to formally greenlight a sophomore run, it seems safe to assume the SLC ladies will be back, sooner rather than later (Andy Cohen confirmed as much on Tuesday night’s Watch What Happens Live). Before then, though, there are a few episodes left of season 1, including a girls’ trip to Las Vegas (sans Jen’s frenemy, Mary Cosby).

“It’s the most explosive girls’ trip I’ve ever gone on,” Jen says, letting out a big sigh and hinting that the drama of season 1 won’t be left there.