Weird comment comes during an even weirder hearing in Michigan 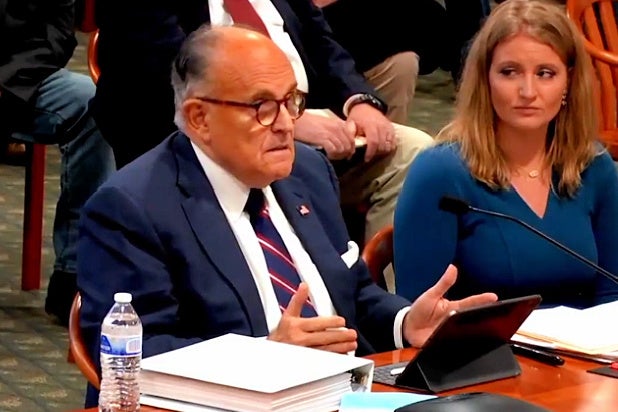 During a wild, sometimes humiliating hearing in Michigan on Wednesday — part of the Donald Trump campaign’s antidemocratic attempts to overturn the 2020 election despite the fact that he lost badly to Joe Biden — Trump’s personal lawyer, Rudy Giuliani, had some peculiar thoughts about what is going on in the country.

The quote came after an extended rant in which Giuliani exemplified decency by demanding that Michigan state legislators ignore every single other part of the state government that has repeatedly certified Joe Biden’s victory, and the will of the state’s citizens, and simply declare Trump the winner despite the fact that he lost. Then, the man formerly known as “America’s mayor” just started whining about how mean people are.

“There’s no way that this wasn’t stolen,” Giuliani falsely claimed before adding that he thinks the people attempting to assist Trump’s efforts to undo Biden’s clear victory have “courage, to stand up to what the Democrats are doing to them.”

“And it’s not just the wild and crazy left wing Democrats who do it. They do it as a way of bullying us,” Rudy continued. “You can see their behavior in this hearing. I can see the difference in behavior on two sides. Maybe sometimes we’re too nice. Maybe sometimes we’re too decent. Maybe we shouldn’t change, but one thing we should have is have the ability to defend ourselves, and not let our people get kicked around the way those Republicans were kicked around.”

Now, to be clear, literally no violence against Republicans has been reported during this whole election debacle, not even after Trump began his campaign to disregard  the clear will of the majority of Americans. And watching the full video of the hearing, it’s difficult to identify any moment where anyone is “bullying” to Giuliani or his witnesses.

But, something that didn’t get brought up is the fact that many public servants have been subjected to repeated death threats and other threats of physical harm by people supporting Donald Trump. And Trump himself has even started publicly insulting Republican governors who have certified Biden’s victories in their states.

Because clearly, he’s too nice.

Watch a clip of Rudy’s remarks below, and the full hearing, if you can tolerate it, here.