Secrets from Chernobyl that may never be told

Chernobyl may have taken place in 1986, but something about it is clearly feeling very 2019.

A couple of weeks ago, Harvard historian Serhii Plokhy's gripping bestseller, Chernobyl: History of a Tragedy, won the coveted Pushkin House Book Prize, having already been awarded the Baillie Gifford Prize for Non-fiction. Meanwhile, the UKTV series Abandoned Engineering will be visiting Pripyat – once a showpiece city meant to represent the future of the Soviet Union, which was abandoned after the explosion at Chernobyl – as one of its featured "ghost towns". 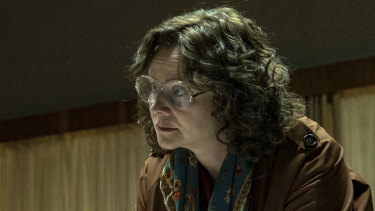 Emily Watson as Ulana Khomyuk, a fictional character in the HBO dramatisation of the 1986 nuclear disaster in the Soviet Union. Credit:Fox Showcase

Plokhy's riveting account of human error and state duplicity is rightly being hailed as a classic. Meanwhile, HBO's brilliantly horrendous series, Chernobyl, has been declared the highest-rated television show of all time by IMDb.com (Internet Movie Database). Over in Russia, a "patriotic" version of the incident featuring American spies has been shot by television channel NTV, and a film about the Ukrainian disaster will be released next year. For once, in this age of television overload, it feels as if everyone is talking about the same thing – and labouring under the assumption that they understand nuclear physics.

Where experts usually recoil in horror from this sort of dramatisation, Plokhy counts himself an admirer of the recent Chernobyl series, which is still available to watch on [Foxtel]. "

Although, as a historian, I can tell that it has quite a few inaccuracies and misrepresentations of the actual circumstances, the miniseries has been received very positively not only by the Western audience but also by the former Chernobyl engineers, workers and liquidators, whom I met in Kyiv in the last few weeks. This is quite an achievement."

The heroism was real – beautiful and wonderful, as well as horrifying and ugly

So why is this Cold War catastrophe having such a zeitgeist moment? Plokhy is not surprised by our preoccupation with the subject, given our environmental and geopolitical anxieties. 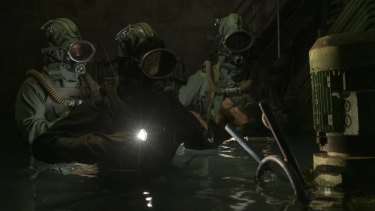 Chernobyl’s ‘divers’ as it was depicted by HBO.

"This is a glimpse into a possible future and a warning to the entire civilisation: one day it can disappear if we do not stop the spread of nuclear weapons, or establish strong, international control over the way how the nuclear industry works. It turned out that Chernobyl was more than just an accident. Fukushima demonstrated that such accidents can happen in the future. We are in the middle of a big debate regarding whether nuclear energy can stop climate change, or whether it is a Trojan horse that could destroy the environment we are trying to save."

Plokhy, 62, is now a Harvard professor, regarding himself as a Ukrainian-American. However, he was born in Russia, grew up in Ukraine, and – on April 26 1986 – was a young academic living in Dnipropetrovsk, now Dnipro, 300 miles downstream from the damaged reactor. People always ask what he remembers of that day and, of course, the answer is nothing: in the USSR, news leaked significantly more slowly than the radiation. 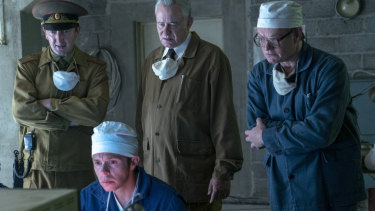 The HBO dramatisation of the 1986 nuclear disaster illustrates what happens to societies corrupted by the institutionalisation of lies and destruction of trust.Credit:Fox Showcase

Later, as the account emerged, Plokhy shared the collective incredulity: "Soviet reactors didn't explode – we felt this must have come from an aeroplane crash or outer space."

Then came panic, as the rumour mill created by the system's strategic silences swung into action. At one point, he was told that, in 48 hours, the water supply would be contaminated and his city dead. This failed to come to pass. However, years later, doctors informed him that his thyroid showed signs of having been inflamed – a symptom of radiation exposure.

The official death toll stands at 31, unchanged since 1987; more realistic estimates put it between 4,000 and 90,000. Plokhy declines to come up with a figure, maintaining that the impact on psychological health was far more substantial and thus millions were – and are – affected.

Plokhy tells me that when he started researching his book, he was heartbroken by the accounts of self-sacrifice and needed to develop a thicker skin.

"I had friends who went to the exclusion zone. The heroism was real – beautiful and wonderful, as well as horrifying and ugly".

However, the emotion evident beneath the surface of his history is what gives it its moral force. He tells us not what we must think about nuclear power, but that we must think – and that dystopian fantasies become real at the touch of a button.

*Chernobyl is streaming on Foxtel's On Demand. Abandoned Engineering screens on Foxtel's History channel at Thursdays at 7.30pm AEST from July 25.