Sharks aren't scary – they're cute, have emotions like us and even glow in the dark, says Steve Backshall

Well, yes. But a new natural history series aims to show the fearsome fish can also be romantic, curious — and even CUTE. 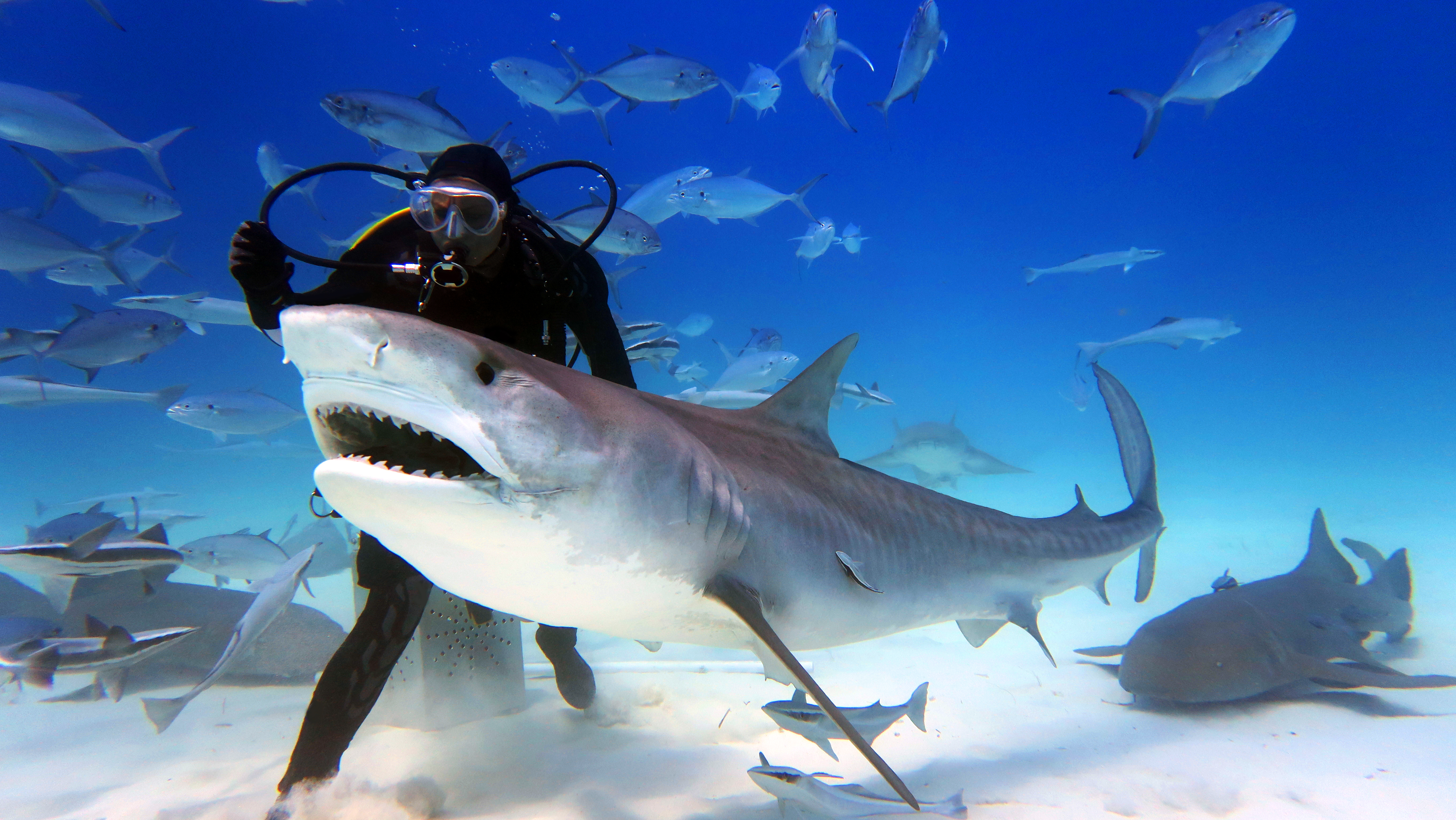 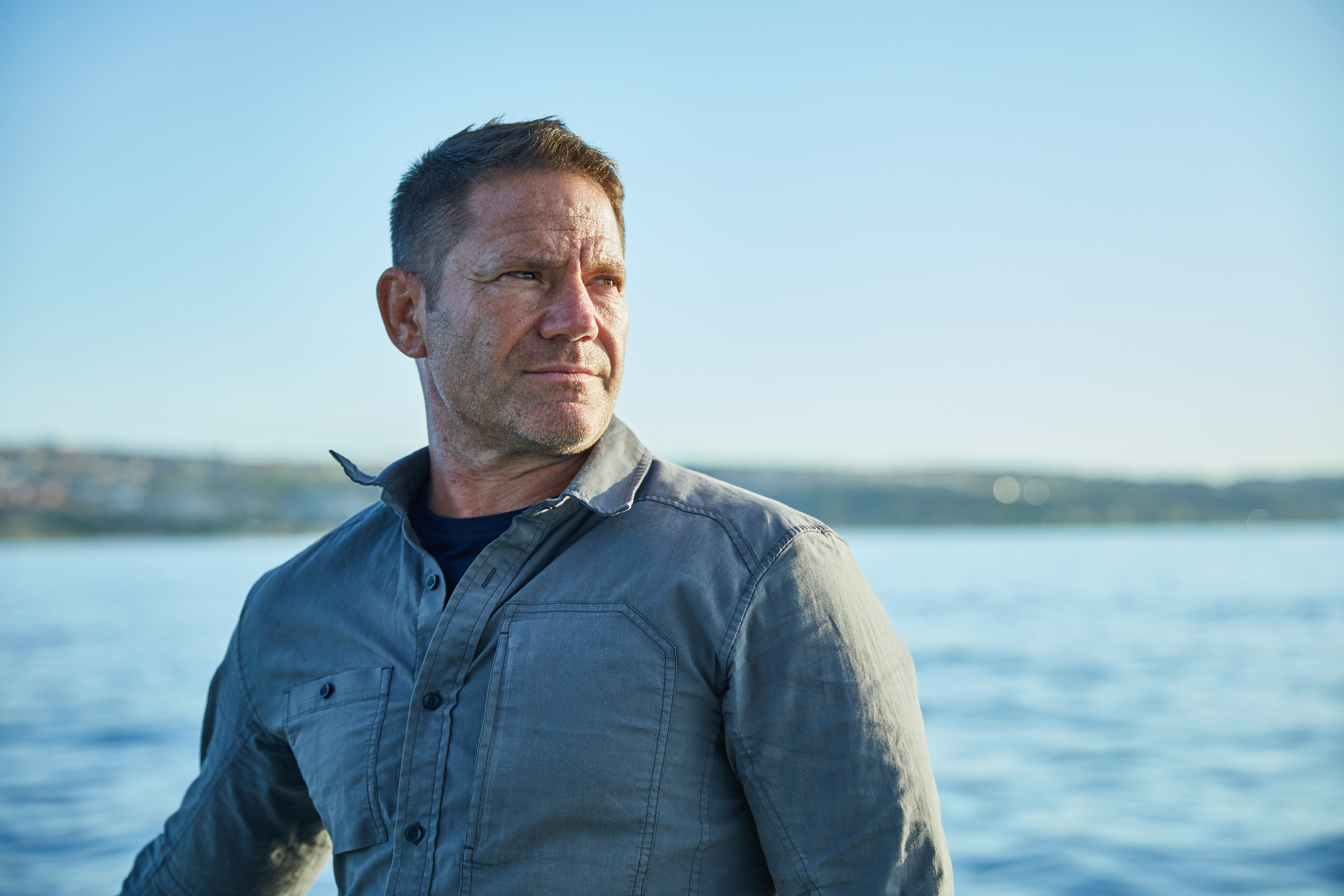 Shark With Steve Backshall filmed different species of the beasts all over the world and the result is a spectacular three-part series showing the animals up closer than they have ever been seen before.

The TV team uncovered all sorts of surprising behaviour, including the epaulette shark that can leave the water and walk on land, glow-in-the-dark sharks and a nursery full of sweet-looking baby lemon sharks that huddle up to each other for protection.

Viewers also see the Greenland shark, that can live for 400 years.

Steve, famous for his cult series Deadly 60, where he tracked down the world’s most dangerous animals, says he hopes to show sharks aren’t that scary — while also admitting that he was terrified the first time he encountered one.

The 48-year-old said: “I’ve done more than 1,000 dives with sharks now. But the very first was completely by accident when I was about ten years old, and it scared the living daylights out of me.

“Because sharks are these great big fish with huge sharp teeth that will eat you as soon as look at you, right?

“It was a black tip reef shark in Malaysia, I was snorkelling and I absolutely wet my pants. I climbed on to a rock and sat there for two hours until I got totally sunburned and had to get back in the water and make my way to the shore.

“I know now it was a totally harmless species, and without question didn’t mean me any harm.

“But being in deep, dark water is a universal fear that everybody has — knowing that somewhere around you is a perfect apex predator that’s evolved over millions of years to be the top of the tree, and that’s inherently frightening.

“I’ve learned now to get past those fears and reach a position of knowledge where I can go out into deep blue water and swim with a great white without a cage.

“It’s taken time but it’s led to my love affair with sharks.”

But he insists that is not the whole story.

“Jaws was, and still is for a lot of people, massive,” he says. “And there have been many films since, like the Sharknado movies. The fact is, that’s just not how it is.

You’re more likely to be killed in an accident with a champagne cork or a lawn mower.

“Every time I swim with sharks, whether it be here in the UK or in the warm waters of the Caribbean, I learn something new.

“I find it so revolutionary that you can be in the water alongside a giant apex predator and it will completely ignore you and have the smartness to assess that you are not a part of the menu and swim around you to get to a fish on the other side.”

Not that Steve recommends that just anybody jumps into water with a shark.

He says it has taken years of experience to learn their body language and know when it is safe and when to get out the water.

Every time I swim with sharks, whether it be here in the UK or in the warm waters of the Caribbean, I learn something new

“In all interactions with wild animals the number one thing is that you must not be scared,” he says.

“That sounds counter-intuitive but you never enter into any kind of interaction with a wild animal if you’re frightened because animals sense fear and they can be triggered by it, switched on by it.

“You do not want to be in the water with a shark and have your heart racing and your breathing going crazy.

“You could turn a totally safe situation into a dangerous one by your own attitude.”

In one astonishing scene, Steve swims alongside white-tip sharks and helps free them from fishing hooks caught in their mouths, which were causing pain and difficulty feeding.

The sharks swim up to him and bash against the camera he is using, yet he says they were not being aggressive, just curious.

He adds: “There was one female who was obviously struggling to feed because of the hook That was not coming out by itself. It would have been there until the shark died.

“It was quite a lot of effort to get it out. Every time I came in close and got hold of the line she pulled her head away.

“Imagine having a hook embedded in the side of your face, and I’m sure a shark’s teeth and jaws are super-sensitive, far more than our own.

“So me grabbing hold of the line and pulling on it must have been agonising.

“When I finally got it free, that was quite an emotional moment.”

Steve says sharks have become smart at finding fishing boats and following them for scraps, but they frequently end up tangled in the fishing equipment.

He estimates that 30 per cent of critically endangered sharks are trailing fishing lines and hooks.

Steve adds: “Imagine if a tiger or a giraffe was walking around with a hook in its mouth.

“If that was happening with terrestrial species, people would be absolutely up in arms.

“Sharks are just as precious and far more endangered. Yet we accept it.”

Another conservation problem facing the world that needs immediate attention is, according to Steve, the dumping of plastics in our ocean, as highlighted by the David Attenborough-fronted BBC series Blue Planet II in 2017.

Research shows that plastic broken down in our waters leads to sharks swallowing tiny micro-plastic beads, which can damage their health and reproduction.

In one of the most distressing moments of the series, Steve and his team visited Thilafushi in the Maldives, in the Indian Ocean, known as “Trash Island”.

You’ve got all of these beautiful, pristine islands where luxury tourists are spending a lot to enjoy perfection and just around the corner there’s all this rubbish being sloughed straight into the ocean

An estimated eight million pieces of plastic enter our oceans every day, and this island is a particular problem because all the single-use plastics from the region’s many luxury holiday resorts end up there.

Steve says: “You’ve got all of these beautiful, pristine islands where luxury tourists are spending a lot to enjoy perfection and just around the corner there’s all this rubbish being sloughed straight into the ocean.

“Visibly, it’s hideous, but the knock-on effect is even worse.

“Sharks can live to be over 100 years of age, and are so important to us. They live in systems that are being flooded with our broken-down bits of nappies and telephone receivers. It’s absolutely disgusting.

"It’s one of the most pressing of our concerns, and also one that we have an opportunity to do something about.

“A lot of conservation problems are big, scary and complex, like climate change, and it’s very tricky for the media to find ways to address them.

“But with sharks, it’s relatively simple. And there are definitely ways that we can help.

“It’s really, really important for us to be talking about this.”

THE TRUTH ABOUT SHARKS

STEVE and his team travelled the globe studying and swimming with sharks and unearthed some remarkable stories surrounding them. . .

Off South Africa the team captured the sardine run, arguably second only to Africa’s great wildebeest migration as the largest biomass migration in the world.

Each year, billions of sardines spawn in the cool waters of the Agulhas Bank and move north along the east coast of the country, where they attract top predators including spinner sharks.

Despite the shark’s reputation as a fearsome predator, cameras captured endearing footage of baby lemon sharks in the Bahamas, where juveniles live together in a nursery, hanging out in gangs, learning from each other and staying away from predators while they mature.

Near Mexico’s Socorro Island, the team filmed white tip sharks mating, which is believed to be the first time it has been captured on camera.

The team filmed new behaviour of basking sharks in Scotland as they swam side by side for days, which is a tantalising glimpse into their very mysterious lives.

Experts believe this could be some form of courtship.

In the Californian kelp forests off the US west coast, the team witnessed fascinating swell shark behaviour.

In order to attract a mate in the dark depths of the ocean, the shark glows green, a behaviour known as biofluorescence.

The epaulette shark, which lives off Heron Island, Australia, has an amazing ability to “walk” across reefs using its fins.

This means that during low tide they can access pools left vacant by larger predators which fled as the tide dropped.

Steve visited the Natural History Museum in London to see a specimen of a highly rare Greenland shark, which can be found at depths of 2,600metres.

Its blood acts as a kind of anti-freeze to keep it alive at such low temperatures.

The specimen was found beached at Embleton Bay, Northumberland in 2013 and is believed to be the world’s first complete preserved specimen.

Hundreds of whale sharks gather in the Yucatan Peninsula, Mexico each year to take advantage of a rare feeding opportunity.

The team were able to film it due to the pandemic – as there were no cruise ships to cause distractions. 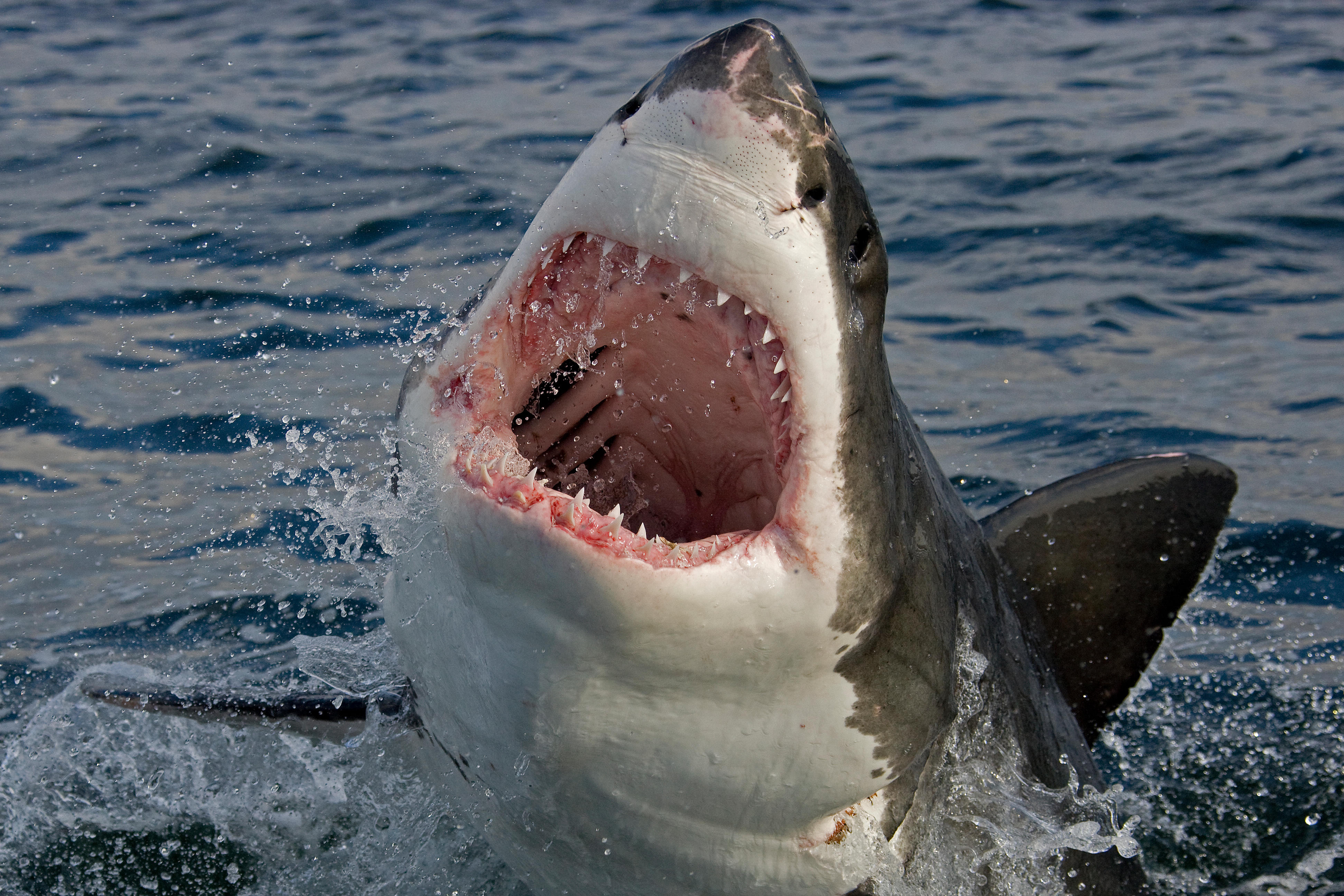 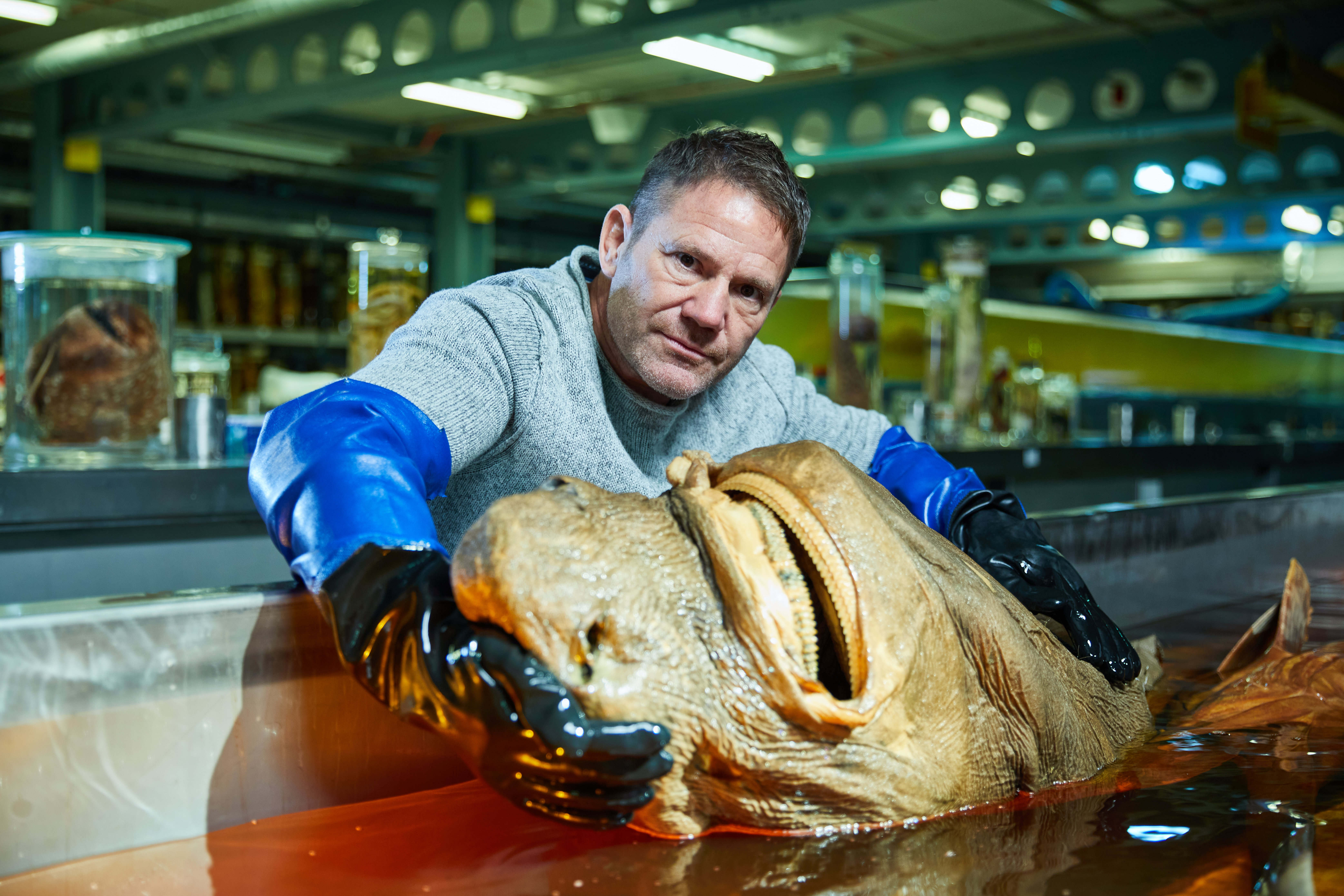 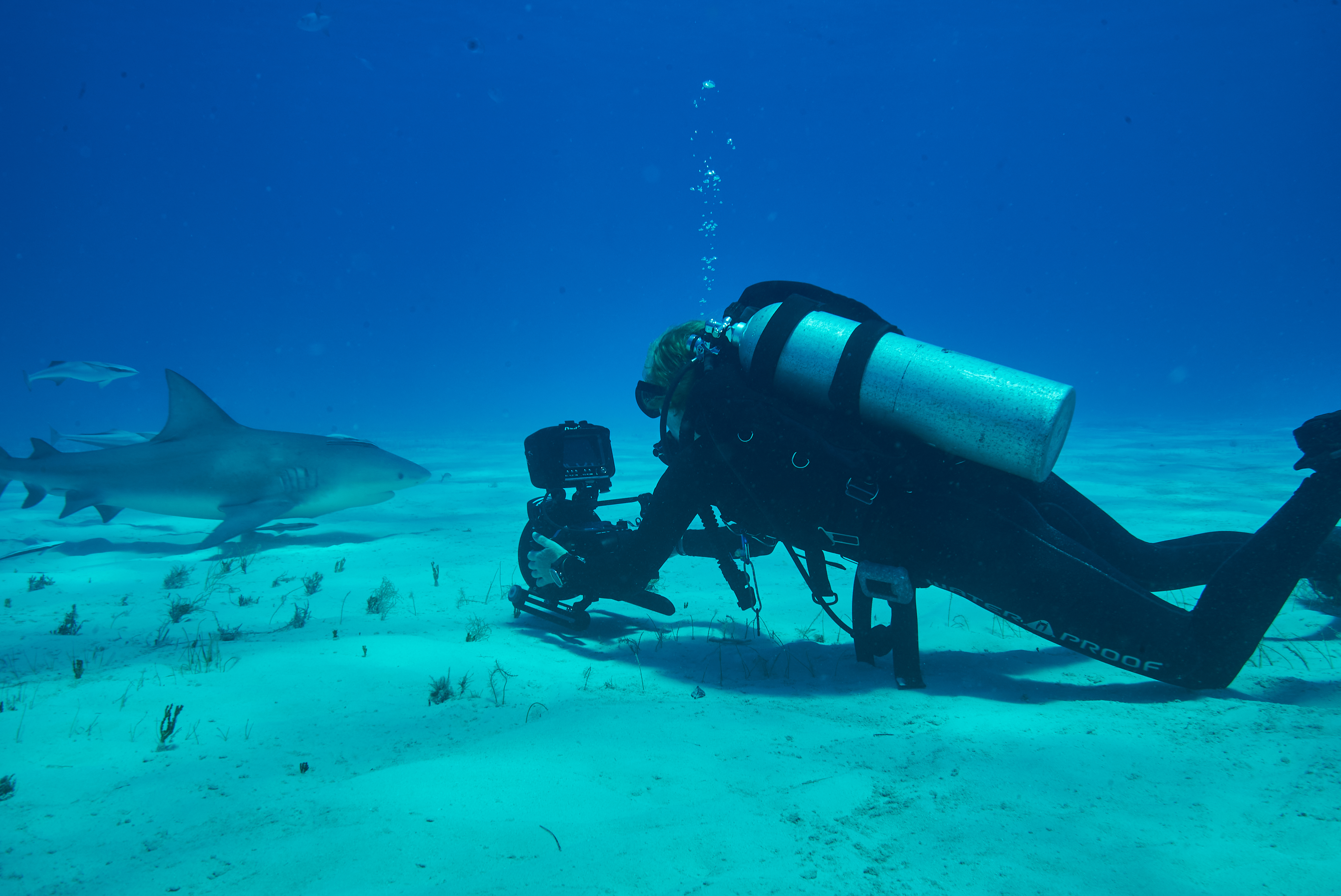