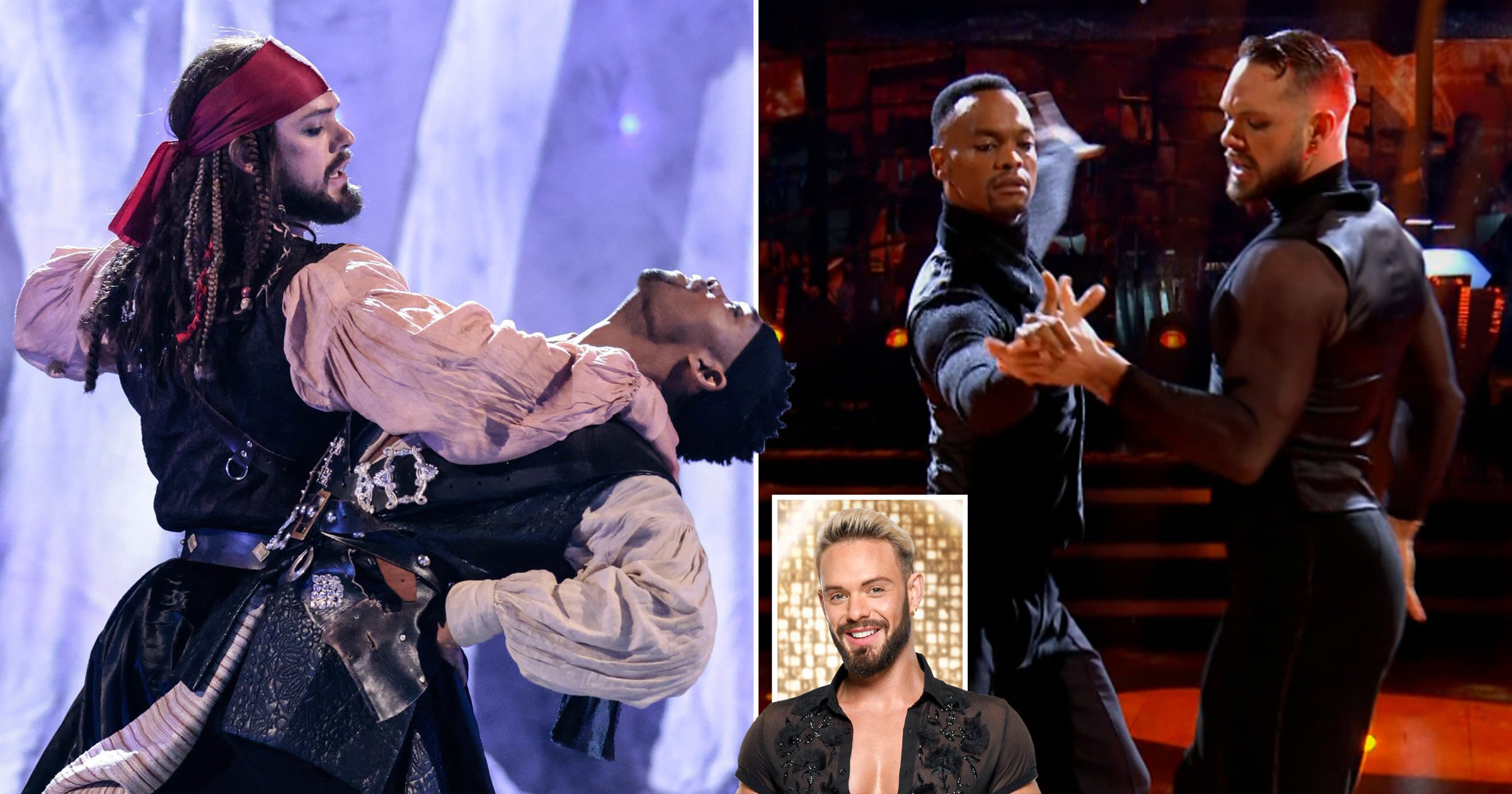 Strictly Come Dancing’s John Whaite is a busy man in the run up to the show’s quarter finals, as he juggles his day job – including appearances on Steph’s Packed Lunch – with training, rumours of approaches for West End roles and even a festive sandwich campaign.

However, he keeps his feet firmly on the ground even during an exceptionally busy – and showbiz – December.

The former winner of The Great British Bake Off topped the leader board on Saturday, alongside his professional partner Johannes Radebe, with a spellbinding Argentine Tango – but despite this he remains modest in the face of being picked as one of judge Craig Revel Horwood’s predictions to make the final.

Speaking exclusively to Metro.co.uk, John revealed that, while his seal of approval is ‘lovely’, it won’t distract him and Johannes from continuing to put the hours in in the training room.

‘That’s very, very humbling for Craig to have said that,’ John admitted. ‘I adore Craig. I think he’s brilliant, absolutely hilarious actually, he’s such a great guy. I’m very, very honoured to have that – but that’s the kind of thing that I just have to not think about it, I have to say, “Thank you, that’s lovely”, but the only thing that’s going to get us there is our hard work and dedication, and the only way we can control that is by enjoying ourselves and learning the dance to the best of our ability.’

Looking back on how much he’s learned during the competition, he added: ‘If you get too fixated on thinking about the small details and the competition, then it takes the enjoyment out of it. I just want to live my best life on that dancefloor and grow as a person, which I have done from day one when I was little rabbit in the headlights! I’m really proud of how far I’ve come as a person during Strictly – it’s been like eleven weeks of intense therapy!’

Describing his professional relationship with 34-year-old Johannes as ‘very formidable’ due to their matching work ethic, he shares it’s also allowed them to develop ‘a great friendship as a result of that’.

For Saturday’s quarter final show, John and Johannes are tackling a Salsa, which involves ‘a lot of loose hips and loose limbs’, which John is enjoying.

He also teases a ‘breath-taking’ moment for Strictly fans to look forward to as he and Johannes work to add in ‘some interesting lifts again’.

‘Even though we are two 6ft 2 blokes, we are ready to show the world that we can still have that dynamic to lift each other. And we’re doing something quite remarkable in this one, which I think is going to take a few people’s breath away. I can’t tell you what it is, but it’s exciting!’

The 32-year-old has previously spoken about dealing with the voice of doubt, and how it affected him during Musicals Week, and revealed that he’s ‘still battling with that voice every day’.

However, he praises partner Johannes as ‘a great support and a great teacher’ as well as ‘one of the kindest human beings I’ve ever met’.

During their Argentine Tango, he was able to ‘bat them [the voices] away’, which saw the couple finish the show with the highest score.

‘Before we went on, I said to Johannes, “Let’s do this. Sod it, let’s just go for it.” And when we danced it on the dancefloor, we’d never done it with that much intensity and passion. The choreographers who choreographed the dance for us, when we came off stage they were in floods of tears because they just couldn’t believe what we achieved. They were so proud, and I was so grateful to them for trusting us with their art form.’

He continued: ‘Every Monday Johannes and I say let’s go into the dance training room with an open heart and an open mind. And we forget what’s been before, we forget wherever we are in the competition, we forget about all of that, because we just want to focus on enjoying the dance, because the only thing that we can control in this process is our input and our enjoyment of it. I think if you get too hung up on the competition, if you get too hung up on votes and all of that, you’re putting your focus in the wrong direction.’

Talk turns to the more frustrating side of Strictly when fans and trolls air their grievances online with – and sometimes even directly to – certain people still competing on the show.

‘If you’re tired and you get a lot of hateful messages – usually we can brush them off and say, “Not today, Satan.” But sometimes people hate you in a moment of vulnerability when you’re feeling a bit under the weather. I think it’s important that we all just say to each other, “Come on, we’ve got this, we’re in this together.” It’s a competition, yes, but we’re in this together, we’re pals, and I’ll always defend and stick up for anyone who’s been bullied.’

The cookbook author – who has spoken out against trolls previously – has his own way of dealing with online hate.

‘What I often do when people send me hateful messages on Instagram is I just reply to them with the number for the Samaritans, because I find that people who feel the need to attack other people have deep-rooted problems of their own. And so I send them the number for the Samaritans and I wish that they find the peace that they need in their lives.’

He added: ‘It’s very tempting to try and come back with an absolutely hilarious witticism but I just think it’s unnecessary, it’s just layering hate on hate on hate on hate. And I just find it’s easier to wish them well, offer them a little bit of help, and then block them. Move on.’

On a lighter note, John was delighted to receive a message of support from Dame Mary Berry on last week’s Strictly show.

‘It was very, very warming actually because I absolutely adore Dame Mary Berry and I have done since I worked with her on Bake Off 10 years ago. And I think it’s also important to never forget where you’ve come from. If it weren’t for Bake Off, if it weren’t for that 23-year-old lad who tried to spike Paul Hollywood’s rum baba with salt, I wouldn’t be having the time of my life on the Strictly dancefloor!

‘I love looking back at Bake Off with great affection and gratitude to the BBC and the production company for letting me be a part of that, because it really has given me an opportunity to have the career that I’ve had. Don’t get me wrong, I’m worked bloody hard since doing Bake Off! We all have to work hard you know – I come from a family of small business owners and it’s in my blood to be adaptable and I’m proud of that, I’m proud of the fact I’m a working-class famer’s son from Wigan –but I’ve worked hard to get where I am today.’

Turning to all things Christmas, John has teamed up with American Express to create a festive small shop sandwich recipe especially for small business owners to add to their menus, encouraging people to shop locally this year.

On his inspiration for the sandwich’s ingredients, John mentions the ‘very special butty’ he and his partner Paul make each year from the turkey and traditional leftovers in his mum’s fridge.

With the inclusion of parsnip crisps alongside brie and other Christmas trimmings, he’s also given a nod to his Northern heritage.

‘I love crisp butties! I’m from Wigan and we eat – well I eat – a lot, a lot of crisp butties, so I wanted to put some crisps on there. I thought I may as well make it a bit posher and I’ve done parsnip crips,  because everybody loves a crunch on their butty.’

He also revealed that gravy was his number one priority, having been inspired by TV show Friends.

‘Monica made that sandwich, the famous Thanksgiving sandwich for Ross, where she put a piece of gravy-soaked bread in the sandwich. We thought we’d maybe be a bit more refined and have gravy on the side for dipping.’

His plans for his own holiday menu are rather more unconventional, however.

‘This year, I’m going to be departing from tradition and I think we’re going to have either a pizza or a Chinese takeaway on Christmas Day. We’re going to a cabin in Scotland just so that we can wind down after the madness of Strictly, and just get our feet back on the ground. I’m really keen on taking pictures of the night sky, so Scotland’s the perfect place to do that, and we often go to Scotland or Canada in the wintertime to be able to do that.’

He shared: ‘When I’m not doing the glamourous, showbiz side of my career, I’m actually quite a quiet, introspective person, quite mindful and quiet, and so I’m really looking forward to turning my phone off over Christmas and just being with my boyfriend and our dog for a couple weeks in the Scottish wilderness.’

John Whaite has teamed up with American Express to create a festive Shop Small Sandwich recipe especially for small businesses.