Juliette Porter has shared plenty of ups and downs regarding her love life during her time on MTV’s “Siesta Key.” She’s navigated some tumultuous experiences, and her various relationships have prompted plenty of juicy headlines. But what some of her fans may not realize is that she used to date a former “The Bachelorette” contestant.

Back in Season 1 of “Siesta Key,” Juliette was in a dramatic love triangle with Alex Kompothecras and Madisson Hausburg. The dynamic between Juliette and Alex was often contentious, with Alex facing cheating allegations during the romance. Even after the two broke up, they had a tough time staying away from one another. As Us Magazine noted, the two hooked up again at the end of Season 3, even though he was involved with Alyssa Salerno. “He was begging. I did not go searching for that,” Juliette claimed. Despite recently having his first child with Alyssa, he admitted of his connection to Juliette, “We both care about each other, it’s pretty obvious. I’m not the type of guy that’s, like, gonna close the door. I always leave it cracked.”

While Juliette and Alex may always be drawn to one another in some sense, she started dating Sam Logan in late 2019. The two had been friends for some time, and things eventually turned romantic. That relationship has been going strong, and she’s seemingly even managed to remain relatively friendly with her former “The Bachelorette” beau. Keep reading to find out who he is. 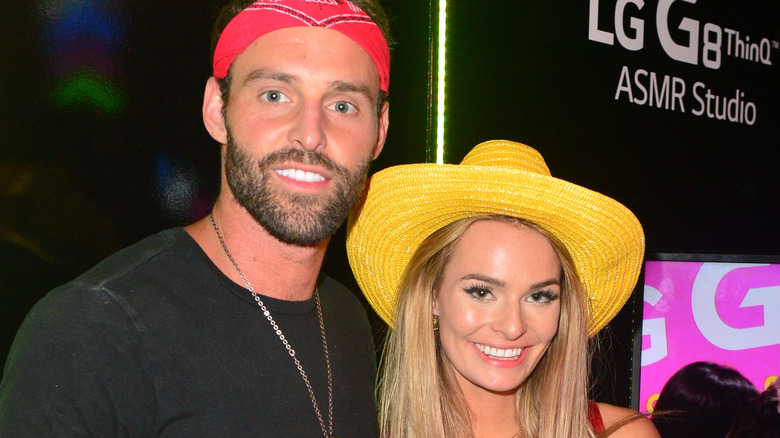 When reality television fans first met Robby Hayes, it was in Season 12 of “The Bachelorette” with JoJo Fletcher, detailed E! News. Robby made it to the final rose ceremony, but he was dumped in favor of Jordan Rodgers. Robby then went on “Bachelor in Paradise,” where he ended up in a short romance with Amanda Stanton (per Glamour).

The following year, Robby met Juliette at the Stagecoach Music Festival, detailed Feeling the Vibe. They continued to hang out after Stagecoach, but it didn’t take long for things to fizzle. A source told E! News that Robby and Juliette “lived different lifestyles” and “decided to split because it just wasn’t fun anymore.”

The short relationship was incorporated into Season 3 of “Siesta Key,” including Juliette’s on-camera breakup with Robby. “I regret breaking up with Robby on camera and, like, not telling him at all it was coming,” she told Us Magazine. “He had no idea. It was so sad,” she added. Chatting with Too Fab in 2020, Robby said, “It was a mature relationship with an immature breakup.” Juliette added, “we’re here now and we’re still friends” after the split. While Juliette’s continued to showcase her romantic life on “Siesta Key,” Robby seems content to keep his relationships private these days.