The Longshot Oscar Nomination: How Bhutan’s ‘Lunana: A Yak in the Classroom’ Made the Cut

Every year, an international feature without the backing of a top distributor or massive marketing lands an Oscar nomination. Last year it was Tunisian entry “The Man Who Sold His Skin”; Samuel Goldwyn Films acquired it after it made the Oscar shortlist; this time, Samuel Goldwyn’s bought “Lunana: A Yak in the Classroom” before the nominations. It marks the first Oscar nomination for the tiny, long-isolated Buddhist country of Bhutan, which became the world’s last country to open to television and the internet in 1999.

The film traveled the festival circuit after its 2019 premiere at the London Film Festival, winning awards and slowly building a profile. Bhutan was so proud of Pawo Choyning Dorji’s feature debut that the country submitted the movie twice. The Academy initially disqualified it because the country had neither an official selection committee nor an Oscar track record: Bhutan hadn’t submitted a film for 23 years.

When photographer-turned-director Dorji tried to fill out the submission form, he told me on Zoom, it listed neither Bhutan nor its official language, Dzongkha. The Academy had to update the website before the stressed filmmaker (barely) met the deadline.

The logistics of shooting the film at the world’s most remote school, high in the Himalayas without electricity or network connections, were daunting. Dorji struggled for years to determine if the movie he had in mind was even possible.

“I kept pushing myself further and further away from civilization,” he said. “I hiked, I tracked into the eastern valleys of Bhutan, deep into the Himalayas, three, four days in.” (Many encounters, such as the yak herder with no shoes, made it into the film.) Dorji saw the reach of globalization and modernization, no matter how remote. In 2018, after three years of scouting, the filmmaker decided: “I’ll have to go to Lunana. There is no way I can make this anywhere else,” he said.

“Lunana: A Yak in the Classroom”

After a year and a half in pre-production, with some $200,000 in backing from Huanxi Media Group, Dorji loaded up 65 mules with solar panels, batteries, headlights, cameras, and sound gear for the eight-day trek up the mountains. Also traveling was his film’s star, rookie musician-turned-actor Sherab Dorji, whom he discovered in a bar. He portrays a reluctant teacher from the city who’s assigned to the remote post and miserable without his mobile phone. His ambition is to make his name as a musician in Australia.

In the mountains, a winsome yak herder not only teaches him a Bhutanese traditional folk song about the cycle of life, but also helps him out by lending him a yak to live with him and provide him with dung, the source of much-needed heat in the chilly one-room schoolhouse.

Dorji and his cinematographer cousin Jigme Tenzing didn’t know whether the technology would work. Both were mentored by Bhutan filmmaker Khyentse Norbu, who gave them advice right through the editing process. Dorji prepared the crew for the possibility that they would not be able to shoot the film under these austere conditions.

They made it work by taking advantage of the stunning setting, recruiting local villagers to play versions of themselves. They planted the camera in the classroom and let the children fly. When the children brush their teeth for the first time, the camera captured their reactions. 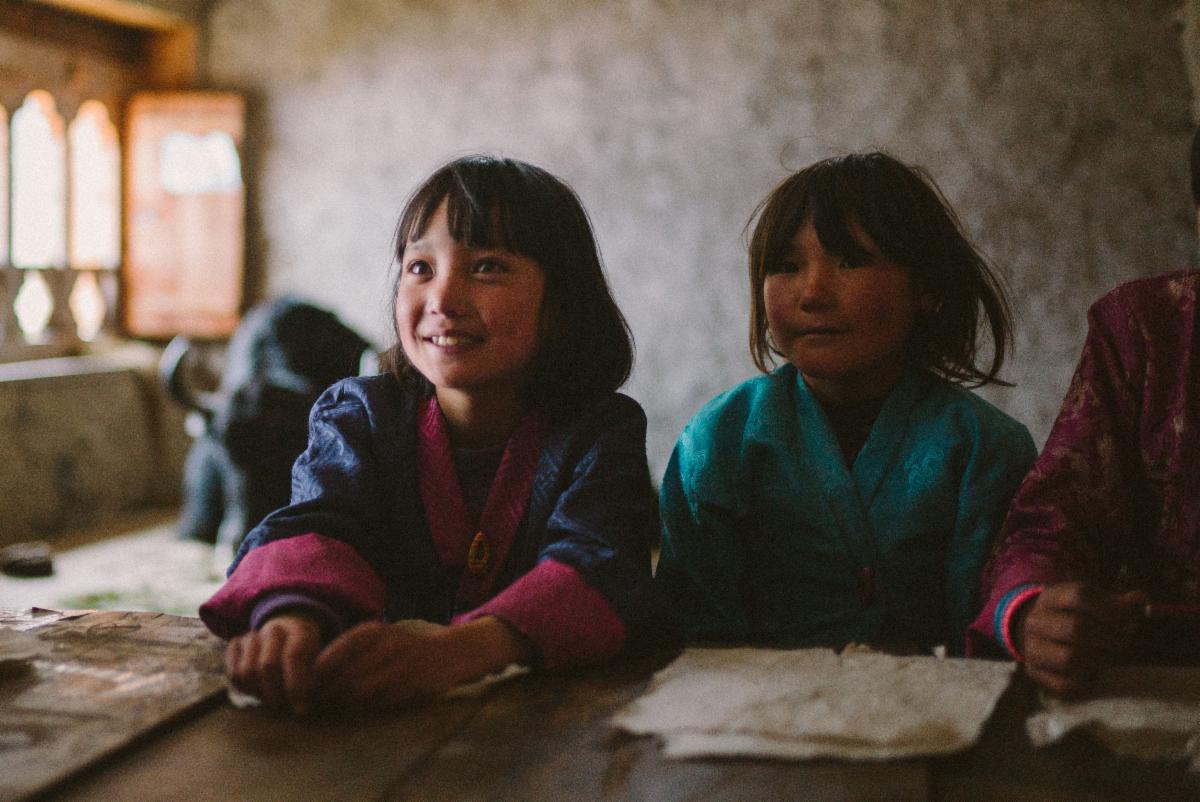 “Lunana: A Yak in the Classroom”

When it came time to say goodbye, the villagers’ and students’ emotions were real. “I wanted to capture the purity of the places,” said Dorji. “Everyone is seeking for what they’re seeking in the urban, in the modern, in the glittering lights of western cities. So I wanted to create a story where I take the protagonist to the opposite end of the spectrum, which is the most desolate, the most remote place in Bhutan and possibly the world. I wanted myself and the crew and the cast to go through this experience. Because I feel like if the filmmakers experienced it themselves, living with the locals — the hardship, the emotions, the love — as the filmmakers go through it, then it translates onto the film. It’s not artificial; the film comes alive.”

Not until the filmmakers returned to the city could they watch what they captured. In the end, the movie’s gorgeous setting and charming non-pro cast proved a winning combination. (There are now cellular towers even in Lunana.)

Next up: The Taiwan-based Dorji made connections around the world, from French and Swiss investors to Hollywood, as he tirelessly promoted the film. He’s now prepping “Once Upon a Time in Bhutan,” a culture-clash story about an NRA gun collector who travels to Bhutan in search of an antique rifle in the hands of a reclusive monk. Delayed by the pandemic, Dorji hopes to get it made this summer.

Samuel Goldwyn Films released “Lunana: A Yak in the Classroom” in limited release on January 21, 2022.