Ivan is a majestic silverback gorilla who loves his home (a circus-themed mall), his job (scaring kids during his daily show at said circus-themed mall), and his family (his seemingly kind-hearted owner, plus the motley crew of other animals who live in the mall and perform alongside him). Ivan’s life is great, because he’s never quite allowed himself to think about anything else — certainly not his life before the mall and the owner and the performances — though that is about to change in a major way, as Ivan’s once-steady life is rocked by new experiences. Thea Sharrock’s touching take on Katherine Applegate’s children’s book gracefully weaves together the obvious (cute talking animals) with some headier ideas (like perhaps those cute talking animals should have rights?), offering up a smart kids’ movie that is likely to really stick with its youngest viewers.

Like Applegate’s book, Sharrock’s film — scripted by Mike White, who also pops up in a funny cameo and voices a neurotic seal — is told from Ivan’s perspective (voiced by Sam Rockwell), creating a sense of discovery that helps sneak in some of the tougher ideas without permanently scarring the most sensitive members of its audience (this writer cried throughout, so make of that what you will). Initially unfolding a bit like a fairy tale in which Ivan is the (one and only) star, the film presents a fantastically fun world in which the cracks are just starting to show.

Ivan gets to perform every day for packs of cute kids (even if he wonders why he needs to scare them as part of his act), and he does it alongside all of his adorable animal friends. When the show is done, the sweet Julia (the charming Ariana Greenblatt) draws him pictures, while her dad George (Ramon Rodriguez) serves as right-hand man for fast-talking owner Mack (Bryan Cranston). At night, Ivan hangs out with a stray pup who sneaks into his enclosure (voiced by Danny DeVito) and hears stories from his oldest friend, the wise elephant Stella (voiced by Angelina Jolie). Lovely voice work fits in sweetly alongside stellar effects (in short: hey, these animals look real!), and for its first act, “The One and Only Ivan” lulls its audience into the kind of complacency its gorilla star has always enjoyed. Maybe. 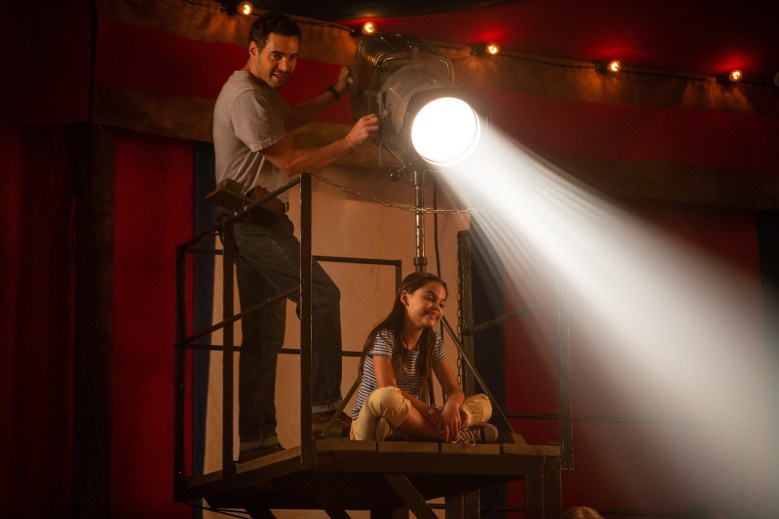 “The One and Only Ivan”

Mack, toggling between dedicated animal lover and rumpled business owner, is losing money at a fast clip; circus-themed malls and their attendant animal acts aren’t the money-makers they used to be. Enter the show’s new star, a tiny baby elephant named Ruby (beautifully voiced by Brooklynn Prince), whom everyone adores and an ailing Stella happily takes under her trunk. One imagines the arrival of Ruby will inspire plenty of young viewers to stop the show and ask an obvious, if necessary question: “Where is Ruby’s family?” Once that worry is set in motion, both on screen and probably in the homes of many Disney+ subscribers, it becomes impossible to shake. Where is Stella’s family? Or Bob the dog’s? The neurotic seal, where is his family?

And where is Ivan’s?

Smartly trading on the belief that elephants have long memories, Stella regales her young charge with stories of her in-the-wild youth that inevitably push Ivan to remember his own early days. As tragedy unfolds at the mall-set circus — again, gracefully handled by Sharrock and White, who seem eager to impart big lessons on their smallest viewers without sending them into hysterics — Stella moves on to her next stage of existence, and Ivan finds himself promising to do the impossible: to take care of Ruby, and in the way Stella would have wanted.

A dizzying series of events follows, ramping up the energy and setting the stage for both bitter truths and a bit of a madcap adventure. Ivan, always interested in Julia’s artistic passions, begins to make his own art (it’s not a stretch to call his scribbles protest art, another big concept smuggled into a cuddly kids’ film) as Ruby starts being trained for her life as a performing elephant. Strange pacing in the film’s third act might confuse some, as does its see-saw tone, but it also reflects Ivan’s confusion as he grapples with the implications of his own life. Emotional flashbacks give the film’s main characters more richness — even for Mack, who is never treated precisely as a villain, but certainly has some amends to make.

“The One and Only Ivan”

The concept of “making amends” is top of mind in the film’s last half, and while Applegate’s lauded book offered a rosy view of zoo life — and the idea that they are “where humans make amends” is still present in the film — White has offered a necessary update to that storyline, one that would likely have bothered anyone up to date on the story of a being like Happy the elephant. The humans of “The One and Only Ivan” do need to make amends, and Sharrock and White don’t turn away from that, even if they occasionally tamp down the darker sides of people’s misdeeds. (Ruby’s training, for instance, is never overtly abusive, but a tense score and some clearly unhappy supporting characters make it sting.)

It builds to a conclusion that, like the best parts of this film, combines movie-magic whimsy with hard-won realism, slipping some very grown-up ideas (and ideals) into a classic talking-animal charmer.

While the film was originally bound for a theatrical release (and likely would have looked spectacular on the big screen), it’s a smart fit for Disney’s own streaming service, guaranteed to inspire heady questions (and necessary movie-watching pauses) from its most curious viewers. By the time the credits roll and Ivan is introduced as being based on a very real gorilla, mall job and all, questions will already be at a fever pitch. Ivan, it seems, would have loved that.

“The One and Only Ivan” will start streaming on Disney+ on Friday, August 21.