‘The Outside Story’ Review: Brian Tyree Henry Looks Inward in Gentle Film About Being Locked Out

Charles doesn’t see much reason to leave his sunny second-floor Brooklyn apartment. Everything can be delivered, he can do his video editing at the desk that’s right next to his kitchen, and after his recent break-up, he’s got little interest in human interaction. What could possibly entice him to leave? In “The Outside Story,” Casimir Nozkowski’s ambling, rambling feature directorial debut, the answer is “bad luck” and “narrative necessity.”

In his first lead role, Brian Tyree Henry (“Widows,” “Atlanta”) brings nuance to Charles, the introverted homebody at the center of Nozkowski’s good-hearted but ultimately minor feature. Meant to debut at the 2020 Tribeca Film Festival, one of the first major film events to be cancelled last year, Charles’ quest to get out of the house now takes on an unexpected tone. Still, the film is predictable in its revelations: Maybe it’s a good idea to broaden your horizons, even if that just means finding out the name of the kid who lives above you.

With the recent dissolution of his relationship with girlfriend Isha (Sonequa Martin-Green), Charles’ insular world has grown even smaller. A series of flashbacks detail how he met Isha at a raging party where they both confessed to wanting nothing more than to get the hell away from the hubbub (Charles meant that in the larger sense; Isha was just looking for a quiet evening). Now he’s subsisting on cheap takeout and scattered FaceTimes with his best pal Amy (Rebecca Naomi Jones), punctuated by hysterical texts from his crazy boss. While Charles used to edit documentary films, his current job is waiting for other people to die. (He makes video tributes for soon-to-be dead Hollywood stars.)

After a series of mishaps (largely rooted in his bad manners around food delivery), a shoeless Charles finds himself locked out of his apartment and forced to interact with a staggering assortment of neighbors. Filmed on location in Brooklyn, “The Outside Story” feels a bit like a sweet and smart stage idea (or Sesame Street’s “Who Are the People In Your Neighborhood?”, writ large), forced to play out on actual streets, stoops, and cramped apartments. The location helps sell its realism, even as the film veers into awkward tangents and situations engineered for maximum cinematic value. 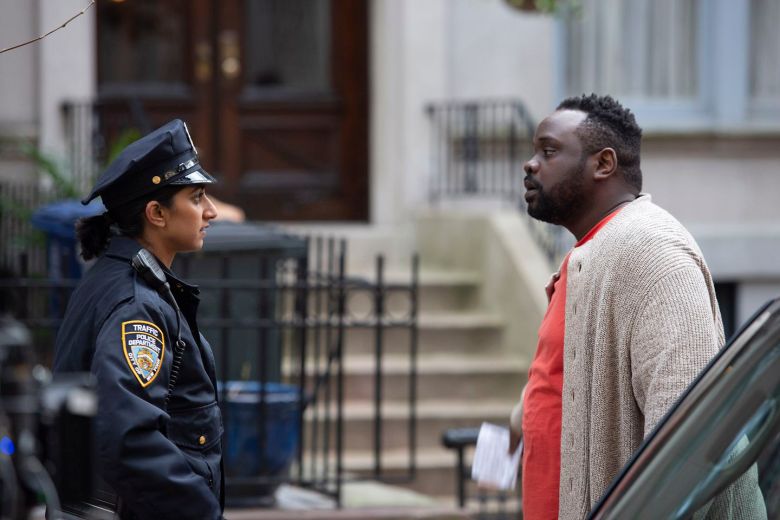 As Charles tries to get back into his apartment, he’s forced to grapple with his inability to connect with others, which pushes him to work through his inability to connect with Isha. Fate (and Nozkowski’s script) continue to throw new people and new complications at Charles, from the continued appearance of his top-floor neighbor Andre (Michael Cyril Creighton) to connections he begins to forge with a charming parking cop (Sunita Mani) and his shy kid neighbor (Olivia Edward).

The universe delivers some necessities (a pair of shoes; an enlightening exchange with the person seemingly responsible for his breakup), as it takes away other comforts (the possibility that a major star is about to die, with Charles’ video obituary still unfinished). Henry is a steady, believable presence even in the film’s wackier moments, and Nozkowski captures his lead character on the cusp of a major life change against small-scale incidents. The film sidesteps headier issues — Charles’ continued run-ins with the police are defanged to a point  beyond belief — in order to deliver pat lessons about human connection (all welcome, none revelatory).

It’s charming enough, although flashes of flinty humor hint at something edgier underneath. Henry, capable of bringing deep emotion to even small parts (“If Beale Street Could Talk”), often finds unexpected grace notes. Charles isn’t exactly likable, but Henry’s natural empathy makes him someone we cheer for, even as we know exactly where his strange, one-day journey will take him. Henry even finds the space for some winking humor with a sequence that involves Charles, his randy neighbors, and an oddly placed sex swing lets him shows a knack for (quite literally) contorting himself to serve a story. “The Outside Story” could stand to learn more about that from its open-hearted shining star.

Samuel Goldwyn Films will release “The Outside Story” on VOD and digital on Friday, April 30.