“The story that Nielsen tells is only a fraction of the story,” NBCUniversal research chief Jeff Bader tells TheWrap 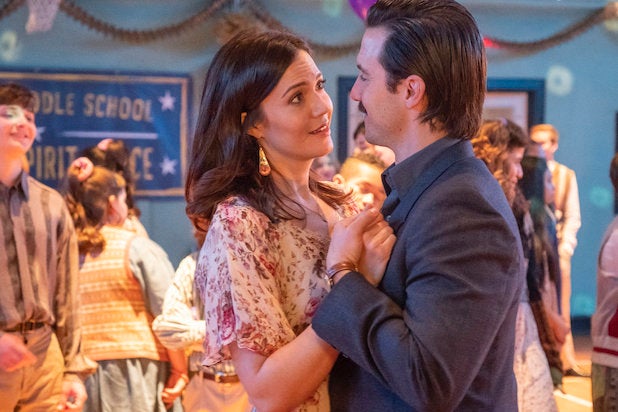 It probably doesn’t come as a shock to anyone that “This Is Us,” the highest-rated drama on television, becomes even higher rated when combining views on digital platforms with the traditional ratings reported by Nielsen.

But it might surprise you to learn just how much the NBC family drama grows when counting streams on Hulu and the NBC App, which is 42% in the advertiser-coveted adults 18-49 demographic and 20% in total viewers, according to data provided by NBC to TheWrap exclusively.

The third season of “This Is Us” averaged a 3.8 rating in the key 18-49 range, according to live-plus-seven-day Nielsen data. But when adding in streams on Hulu and the NBC App, that week’s worth of delayed viewing increases to a 5.4 rating, according to NBC.

Looking at total viewers in the same L+7 time frame, Season 3 increases from the Nielsen reported 13.8 million viewers to 16.6 million when including those sets of eyeballs watching via Hulu and the NBC App.

“The story that Nielsen tells is only a fraction of the story,” Jeff Bader, NBCUniversal’s chief research officer and NBC Entertainment president of program planning, strategy and research, tells TheWrap.

“When you look at traditional Nielsen numbers, it is the No. 1 drama on broadcast — but it’s also the No. 1 show for us on digital,” he said. “Now remember, we don’t know what other people’s digital is, so when we’re talking about digital we just know us. So we also know ‘This Is Us’ is a phenomenon for us, even on digital. And that’s not captured at all in the Nielsen numbers.”

NBC says that over the course of its first three seasons, “This Is Us” has reached an average of 79 million people (unduplicated) in the U.S., which is about 20% of the entire country, when counting linear viewing, as well as digital platforms. (Fun fact: That’s 20 million more people than the Netflix domestic subscriber base.)

The network also tracks the growth of each episode over time and you can see that growth via the charts below, which are also exclusive to TheWrap. Readers will notice that the tables start up with the series premiere on Sept. 20, 2016 and count viewing through Aug. 25 of this year, so you can see how many people have watched a specific episode of “This Is Us” to date.

Take the Season 3 premiere episode for example, which has now has hit a 9.7 in the demo and been viewed by 25.6 million people, when counting streams on Hulu and the NBC App.

He broke it down like this: “It would be like reporting on the number of– if we were in the phone business, it’s like saying how many phone calls there are based on landlines only, ignoring the fact that mobile phones are a huge way that people are making phone calls. Well, digital is a huge way that people are consuming our shows now. So if we want people to have an accurate understanding of how many people are watching, you can’t just look at that one slice.” 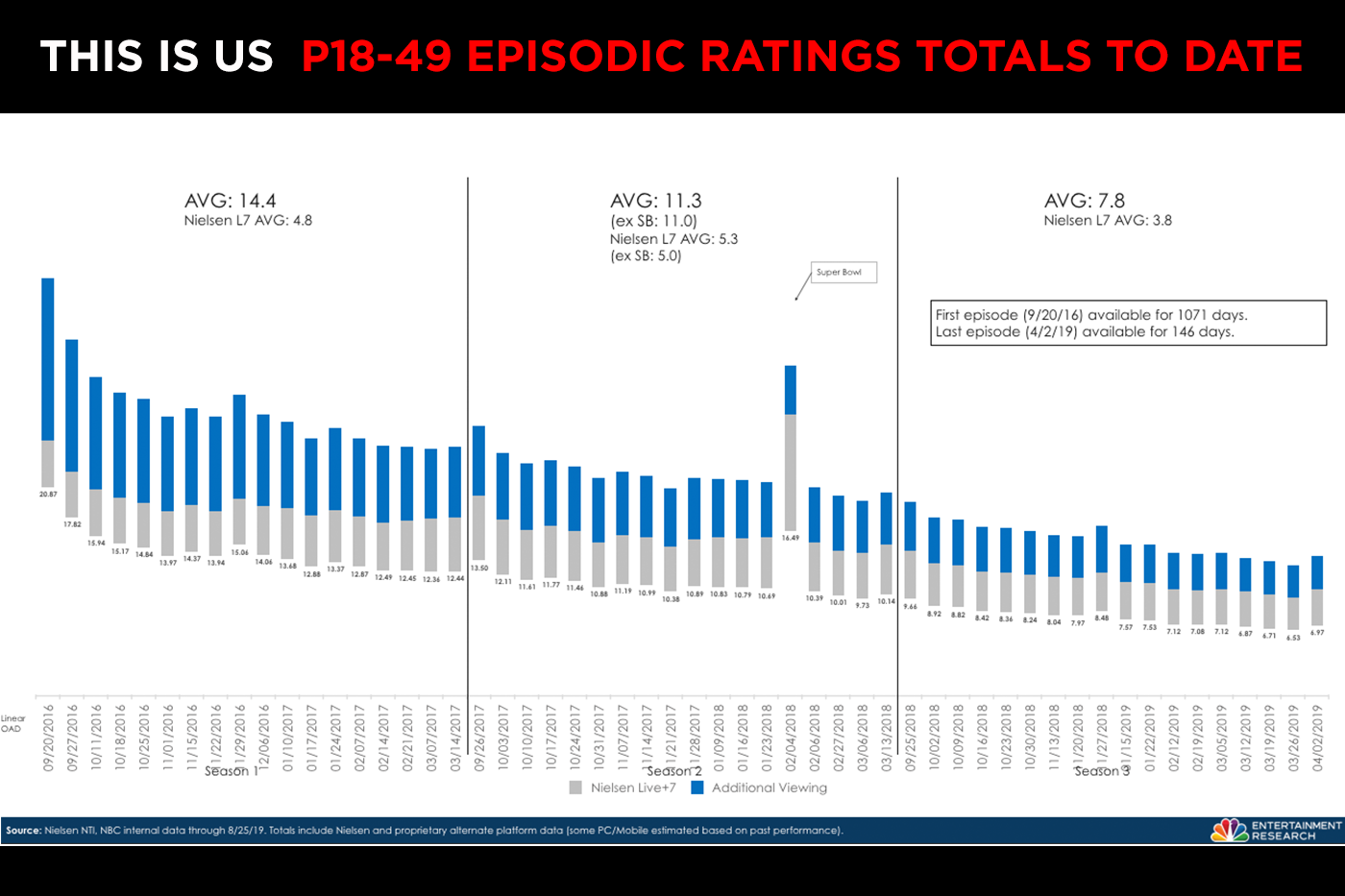 And here’s the chart that shows total viewers: 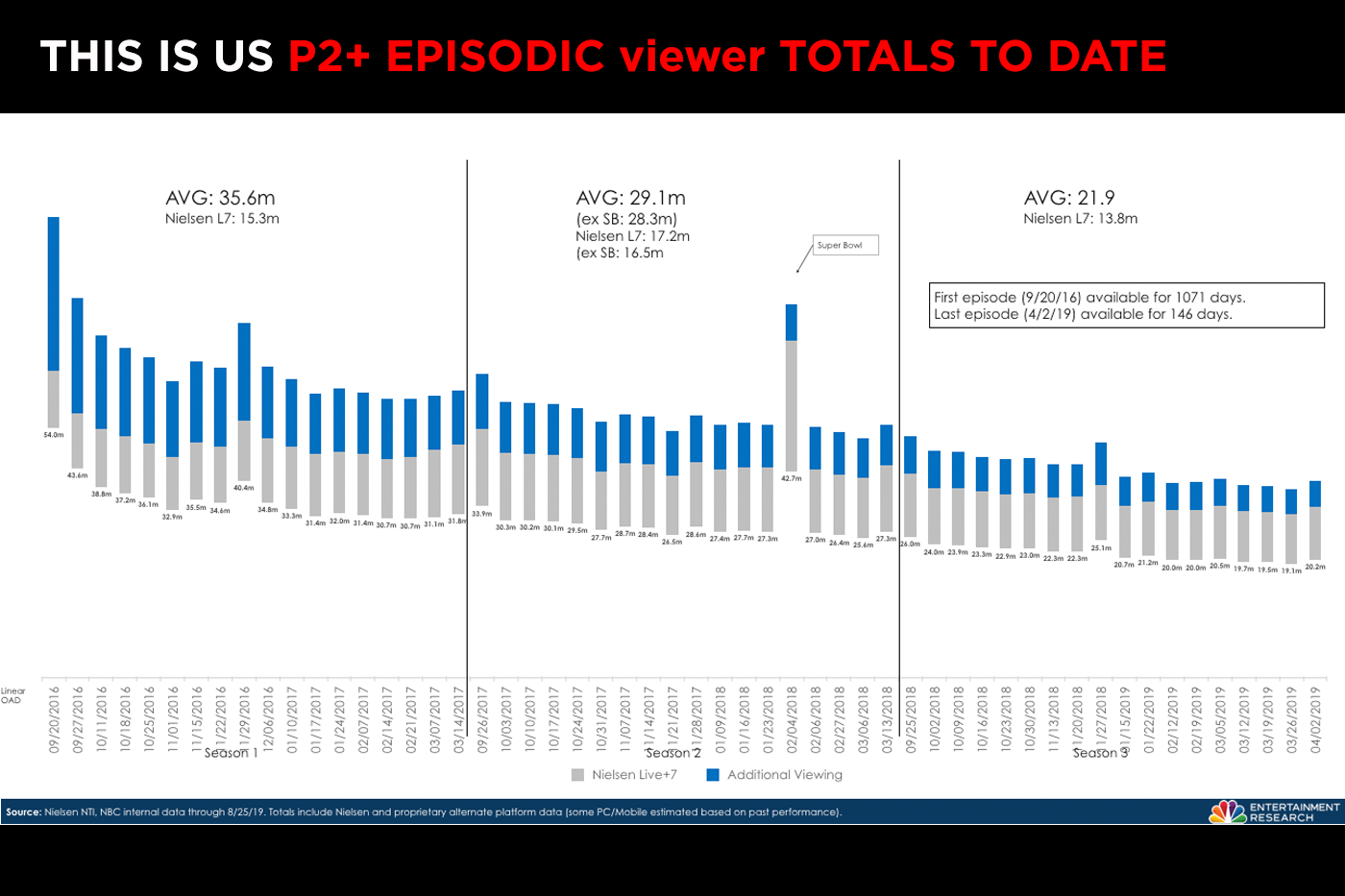