Thomas Ravenel is tying the knot, and the announcement came in the most bizarre way.

The former Southern Charm star is no longer a part of the reality television world, but he is allowing his life to play out on social media. He welcomed a new baby boy with girlfriend Heather Mascoe.

Why did Thomas Ravenel announce he is getting married on Twitter?

Since July, Thomas Ravenel has been basking in the joy that is a new baby. He welcomed a son with Heather Mascoe, though the two appeared to have split after their brief relationship.

Now, it looks like they may be tying the knot. Thomas revealed on Twitter that he was getting married and that a prenup wasn’t necessary. Wait — what? The 57-year-old former reality star is going to take the plunge and won’t have a safety net if he crashes and burns.

While it wasn’t confirmed that Heather was the lady he was pledging his life to, it would make sense. They began seeing one another back in the summer of 2019 but were not together when their son, Jonathan Jackson Ravenel was born this past summer. 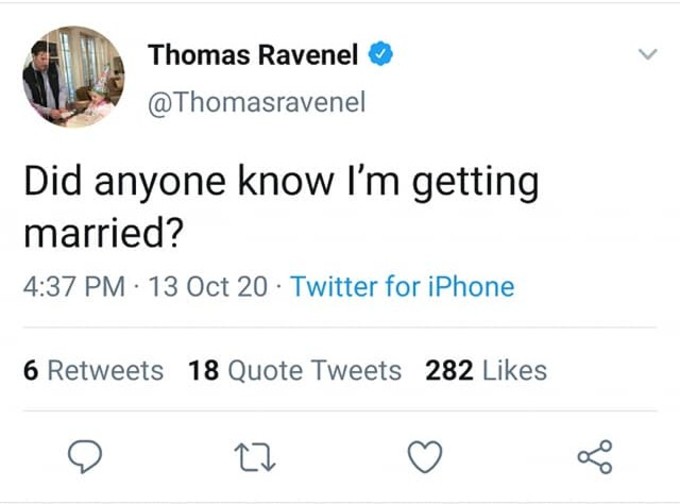 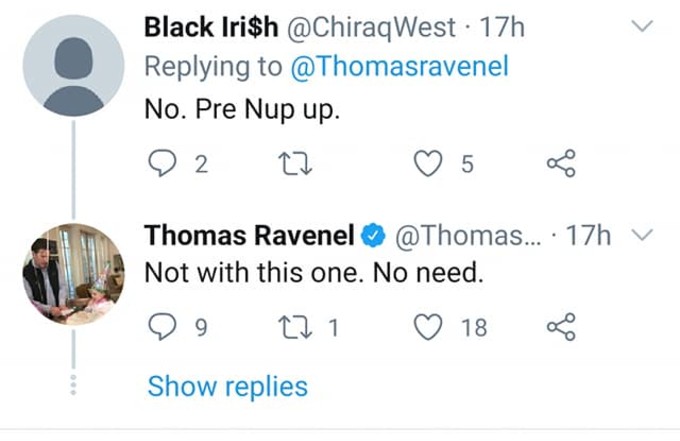 How many times has Thomas Ravenel been married?

Interestingly enough, Thomas Ravenel has only been married once before. He has been accustomed to the playboy lifestyle, but now, he is ready to settle down.

His first marriage only lasted three years. Thomas was married to Mary Ryan Ravenel from 1995 to 1998. The couple did not have any children together.

His marriages may be few, but his relationships have been numerous. While filming Southern Charm, he met Kathryn Dennis. She is the mother of his two oldest children, Kensington, and Saint Julien. Their relationship was tumultuous and was played out across various seasons of the Bravo show.

Ashley Jacobs was another one of Thomas’ girlfriends who appeared on Southern Charm. In an attempt to fit in with the crowd, she made herself look awful. Ashley attacked Kathryn in some of the cruelest ways. Plenty of their drama made the cut for filming as well, leaving viewers stunned at what was actually allowed to happen.

The wedding will not be a part of Southern Charm. Thomas Ravenel was fired from the show and will not appear again. However, the topic of him welcoming his son with Heather Mascoe does make the trailer for the upcoming season.

For now, Thomas is keeping everything under wraps. He talked about his wedding, but details other than no prenup have not yet been revealed.