‘Vida’ Season 2 Review: The Insightful Starz Comedy Gets Down to Business

In the right hands, the day-to-day operations of running a bar can be sturdy building blocks for absorbing television. “Cheers” is the most successful, “It’s Always Sunny in Philadelphia” is right on its heels, and now “Vida” has proven worthy to carry the torch for the foreseeable future. In a longer, richer, and just-as-engrossing second season, Tonya Saracho’s Latinx Starz comedy doubles down on its Season 1 premise, in that sisters Lyn (Melissa Barrera) and Emma (Mishel Prada) commit to rebuilding the bar inherited from their mother.

Yet what makes “Vida” come together so smoothly is Saracho’s understanding of what a bar represents — it’s a respite from life and the origin of it. People go there to get away, and Lyn and Emma have plenty of good times at their Los Angeles cantina. But they also are using it to start anew. Yes, there are new bartenders to deal with, entertainment to book, redecorating to design, and so many more occupational tasks to take care of, but their biggest challenge is themselves: The two divergent sisters have to find a way to accept each other, while finding a way for their community to accept them, too. If they can figure that out, maybe their bar can succeed, as well.

So, Emma buckles down to get the bar on its feet, financially, and Lyn attempts to straighten out her personal life via a cleansing sex fast. Eddy focuses on healing before she can help out (which includes grieving her wife), but the tasks at hand aren’t so simple. For one, they’re dealing with an aggressive real estate developer across the street who’s trying to drive them out of business so he can purchase the building. Despite the fact he’s helping turn the neighborhood into a whitewashed middle-class business district, the anti-gentrification protesters are pretty much on his side. Every step the sisters take to try to increase revenue at their bar is met with intense backlash. 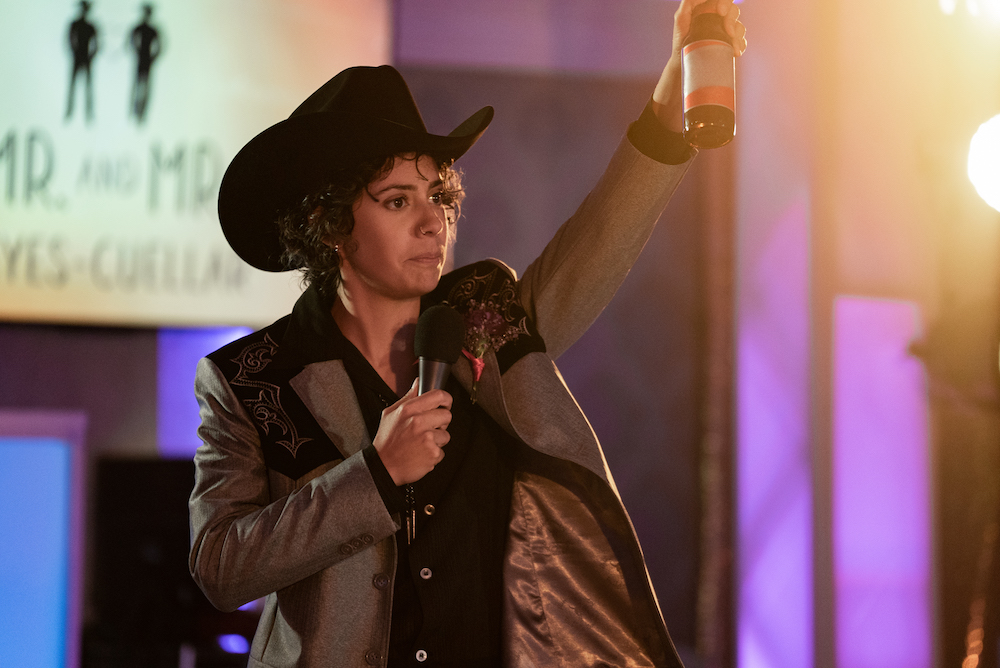 “Vida” doesn’t shy away from the complex debate. On the one hand, Lyn and Emma recognize they need their bar to be friendly and welcoming to more people in order to make enough money to stay open. On the other hand, they’re from this neighborhood, employ Latinx servers and performers, and earnestly attempt to preserve their mother’s legacy through the bar. Mari (Chelsea Rendon), a young, rebellious teenager, often serves as protesters’ perspective; she’s active in the fight to preserve her culture, and Emma’s business-first outlook often clashes with the youngster’s pure outlook on things. By season’s end, both are as confused and compromised as ever, and the series acknowledges the challenges facing these two warring parties.

But for all its insightful socio-political ideas (and plenty of alluring production design), “Vida” doesn’t forget that bars often mark the beginning of relationships. Lyn’s newfound celibacy can only last so long, and some of her most crucial self-discoveries come when she’s at her most vulnerable with someone else. (Lyn goes through so many emotional cycles, she could’ve been overwrought in another actor’s hands, but Barrera is such a joyful performer that she guides her character through it all with nothing but charm.) Meanwhile, Emma is quickly introduced to Nico (played by “I Love Dick’s” Roberta Colindrez), and the couple creates chemistry to spare in a well-executed, slow-burn courtship.

With a Latina director helming each of the 10 episodes (including an impressive debut from Saracho), there’s as much to like offscreen as there is onscreen. “Vida” is an important series — for representation, for diversity, for women — but it’s also an entrancing and enjoyable bar story. Whatever you’re looking for, “Vida” has it.

“Vida” Season 2 premiered at the 2019 Tribeca Film Festival. Starz will release all 10 episodes Thursday, May 23 on the Starz app and on-demand channels.