Who Is Robert Durst? A Timeline of the Real Estate Heir and Murder Suspect’s Sketchy Past 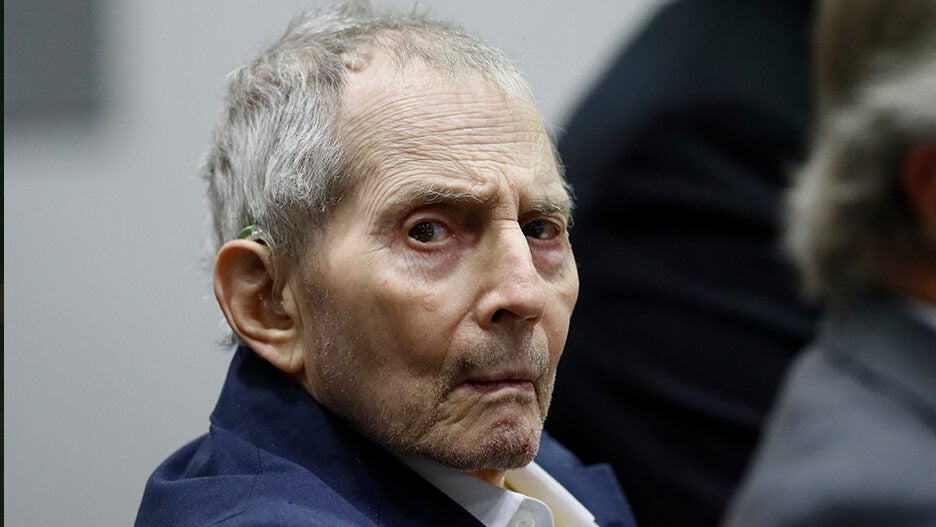 Robert Durst, billionaire real estate heir and subject of HBO’s six-part documentary series “The Jinx,” is standing trial for the 2000 murder of friend Susan Berman, the woman who may have known something about the mysterious disappearance of Durst’s estranged wife more than 33 years ago.

Here is a timeline of the twists and turns that got us from there to here:

January 31, 1982
Kathie McCormack goes missing after a party in Connecticut thrown in her honor by friend Gilberte Najamy. McCormack had received a call from her estranged husband during which the two had a heated argument, and Durst beckoned McCormack to their shared rural New York cottage.

Najamy told People Magazine that McCormack gave an ominous warning about her husband.

At the time, investigators classify McCormack’s disappearance as a missing persons case.

Police prepare to question Susan Berman, a close friend of Durst, but she is found in her Benedict Canyon, California, home shot to death, execution-style, on Dec. 24.

Durst is questioned in connection with the murder but never charged.

2001
McCormack is declared dead, although a body is never found.

On Oct. 9, Durst is arrested and charged with the murder of Morris Black, an elderly neighbor of his in Galveston, Texas. Investigators were tipped off when body parts belonging to Black were found floating in Galveston Bay.

Durst became a fugitive after missing a court hearing scheduled for Oct. 16. He was apprehended Nov. 30 in Bethlehem, Pennsylvania, with two guns and Black’s driver’s license.

2003
Durst goes on trial for the murder of Morris Black, which lawyers argue he committed in self-defense. Durst admits to dismembering Black and disposing of the body parts in Galveston Bay, but Durst’s lawyers argue he suffers from Asperger’s syndrome, and Durst is acquitted of the murder.

2004
As part of a plea agreement, Durst pleads guilty to two counts of bond jumping and one count of evidence tampering and is sentenced to three years in prison, in addition to time served.

2005
Durst is paroled, but returns to jail after violating terms of his parole when he visits the home where he murdered Black.

2010
“All Good Things,” a film based on a fictionalized version of Durst’s life starring Ryan Gosling, is released. According to ABC News, the HBO documentary was spawned when Durst got in contact with the directors of this film.

February 8, 2015
“The Jinx: The Life and Deaths of Robert Durst” premieres on HBO.

March 9, 2015
The Los Angeles district attorney reopens the Susan Berman murder investigation. Evidence revealed in the fifth episode of “The Jinx” included an envelope with block lettering that appears identical to an anonymous note sent on Dec. 23, 2000, to the Beverly Hills Police Department alerting them to a “cadaver” at Berman’s house.

A misspelling on the envelope was also consistent with the note — Beverly Hills is misspelled as “Beverley” on both documents — and police believe the “cadaver” note was sent by Durst.

March 14, 2015
FBI agents arrested Durst, 71, for the murder of Susan Berman at a New Orleans hotel, one day before the final episode of “The Jinx” is scheduled to air.

Agents reportedly believed Durst may have been planning to flee the country, as he was found with falsified travel documents in his possession and had registered at the hotel under a fake name.

“As a result of investigative leads and additional evidence that has come to light in the past year, investigators have identified Robert Durst as the person responsible for Ms. Berman’s death,” the Los Angeles Police Department said in a statement.

HBO releases a laudatory statement following Durst’s arrest: “We simply cannot say enough about the brilliant job that [director] Andrew Jarecki and [producer] Marc Smerling did in producing ‘The Jinx.’ Years in the making, their thorough research and dogged reporting reignited interest in Robert Durst’s story with the public and law enforcement.”

March 15, 2015
In a shocking revelation in the finale of “The Jinx,” Durst is caught with an open mic making what might be a confession to the murders of both Berman and his estranged wife, Kathie McCormack.

“There it is. You’re caught… What the hell did I do? Killed them all, of course,” Durst says to himself off camera.

The filmmakers said they discovered the audio years after it was recorded.

• Durst appears in court in New Orleans and waives his right to fight extradition, meaning he would appear in Los Angeles to face charges pertaining to the Berman murder.

But authorities in New Orleans were considering filing weapons charges, which could have postponed Durst’s extradition.

“Let me just say that we came here to waive jurisdiction and to go back to California and to get it on,” Durst’s lawyer Dick DeGuerin said in court.

“Bob Durst didn’t kill Susan Berman — he’s ready to end all the rumor and speculation and have a trial. But we’re frustrated, because the local authorities are considering filing charges on him here and holding him here.”

• “The Jinx” director Andrew Jarecki said in morning talk-show interviews that the timing of Durst’s arrest had nothing to do with the HBO series finale.

• The LAPD also reportedly denied that their action was scheduled in tandem with “The Jinx.”

“We based our actions based on the investigation and the evidence,” LAPD Deputy Chief Kirk Albanese told the L.A. Times Monday. “We didn’t base anything we did on the HBO series. The arrest was made as a result of the investigative efforts and at a time that we believe it was needed.”

Quite a bit of that evidence was provided by “The Jinx” producers, however. Jarecki says that he and his team had been in contact with the police for the duration of research and filming, and they provided the bulk of the information they’d turned up after the documentary was complete.

“We talked a lot about it with our legal advisors and we said, ‘Look, if we go to the authorities now, we’re missing the opportunity for us to actually get the real story from him, and it may take years for them to do that because the truth is, as filmmakers, we have the freedom to do things that maybe the law enforcement authorities wouldn’t have,” he said on “GMA.”

“Given that we are likely to be called as witnesses in any case law enforcement may decide to bring against Robert Durst, it is not appropriate for us to comment further on these pending matters,” Smerling and Jarecki said in a statement provided by HBO.

The weapons charges were ultimately dropped.

A conditional hearing took place in February 2017 where a close friend of Durst’s, Nick Chavin, said that Durst had confessed to killing Berman. A preliminary hearing was scheduled for October 2017 but was postponed to accommodate Durst’s defense team. In October 2018, a judge ruled there was enough evidence to try Durst for the murder of Berman.

Durst was arraigned on November 8, 2018. During his court appearance the next day, he pleaded not guilty, and in January 2019, the Judge set Durst’s trial date for Sept. 3, 2019. However, that was postponed due to a conflict in attorney schedules and the abundance of case materials.

Durst appears in court to begin trial, but it is soon halted due to the COVID-19 pandemic. After several postponements, Judge Windham ruled a further delay until April 2021 unless Durst agreed to a bench trial without a jury. He declined and the trial was scheduled to resume on April 12, but was then delayed again until May 17.

Durst’s lawyers file a motion asking to postpone the trial indefinitely due to his bladder cancer, and to release him on bail to receive medical treatment. The motion was denied, and the trial resumed May 17.

Durst was hospitalized, but Judge Windham reconvened the trial on June 14. On June 28, Durst’s younger brother Douglas Durst appeared as a prosecution witness and said, “He’d like to murder me. I hired security today. I have fear that my brother has threatened to kill me, and I have fear that he may have the means to do so.”

L.A. Ross contributed to this report.