Who Wants to Be a Millionaire’s Jeremy Clarkson shut down by Prue Leith: ‘Get a move on!’

Who Wants to Be a Millionaire: Jeremy offers Prue Leith advice

Jeremy Clarkson, 60, was joined by the Great British Bake Off judge Prue, 80, at the start of the programme as he kickstarted the second celebrity edition of Who Wants to Be a Millionaire. The presenter went through all the rules, explaining how there were now two Phone A Friend lifelines as the studio audience had been removed as a result of the coronavirus pandemic. Although he did his best to put the cook’s mind at ease, the contestant was still anxious about her participation on the ITV quiz show as she didn’t want to lose the money she had accumulated.

The television cookery judge started well as she worked through the smaller amount of money questions with ease.

Having accumulated a good sum of cash, Prue was asked if she would like to set her “safety net” to which she replied she would have liked to have got it “a little higher” as she only had one chance to do so.

“Following your gut often works,” the host told the contestant, adding: “Not all the time, that’s the trouble.

“It works right until the moment it doesn’t,” he continued to explain before the player interjected his train of thought.

“You know, Jeremy, I spend most of my time here thinking it will all be over in half an hour,” she said, leaving the quizmaster slightly confused. 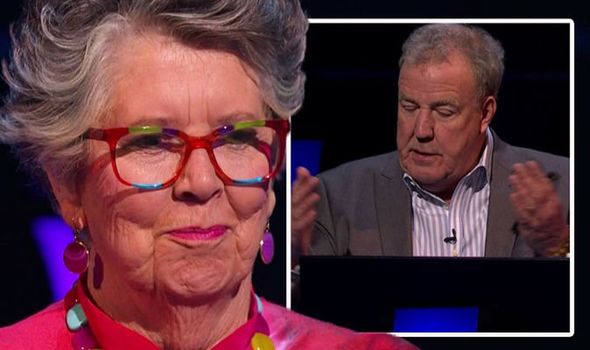 We will use your email address only for sending you newsletters. Please see our Privacy Notice for details of your data protection rights. Chris Tarrant discloses error made after announcing WWTBAM winner

“Do you mean in Manchester or this studio or in this particular programme?” he asked to which Prue replied: “This particular purgatory will be over in half an hour.”

“You want me to get a move on?” the host remarked to which the anxious contestant agreed he should continue with the game.

Following the discussion of locking down her “safety net,” the television judge went on to answer one more question before doing so.

The food critic decided she would walk away with £16,000 if she wasn’t going to make it all the way to £1million.

You want me to get a move on?

It wasn’t long after the television judge had put in place her “safety net” did she make her exit from the competition.

The question she was asked was by Jeremy was: “Which senior crew member on RMS Titanic survived the sinking?”

Unsure of the answer, Prue decided to use her second Call A Friend lifeline and got in touch with her nephew.

Unfortunately, before he could give his thoughts on the question, the timer ran out and the food critic was forced to use her 50/50 lifeline.

This meant she had two answers to guess from and with still no clue of what to do, the television judge chose the wrong answer.

Commenting on the result of Prue stint’s on the show, Jeremy told her: “Well, that was a bit of a disaster, really.”

However, he urged her not to be downhearted as she was walking away with £16,000 to donate to her chosen charity.

Taking to Twitter, those watching at home also passed judgement on the Great British Bake Off star’s performance.

Another fan of the show added: “Titanic question on #WhoWantsToBeAMillionaire and I’m shouting the answer at Prue.”

Whilst a third commented: “#WhoWantsToBeAMillionaire @PrueLeith I think Prue forgot that she didn’t have to actually go for the final question.”

“Can’t believe Prue thought the Captain would be the one who survived the Titanic sinking. Even a rangers fan knows that the captain goes down with the ship. #WhoWantsToBeAMillionaire,” a fourth remarked.

Who Wants to Be a Millionaire is available to watch on the ITV Hub.